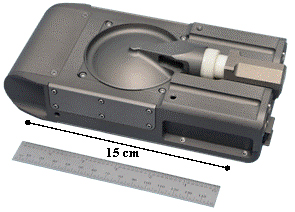 OMG… look how huge! Wonder how many nostrils it got? Gazillions, baby.

Electronic noses are intelligent technology with chemical sensors wired up to software for pattern recognition of aromatic compounds. Once an e-nose detects & evaluates either an isolated or complex set of fragrances, it then compares the new aroma(s) with those stored in its electronic memory bank & ranks them similarly to a human olfactory system. Consider it a prosthetic sniffer, an artificial e-mucosa.

Its advantages are equally easy to recognize. It can objectively conduct surveys at computer speed & crush the fiercest food critics the way IBM’s Big Blue obliterated reigning chess grand master Garry Kasparov. By contrast, conventional aromatic assessments are time-consuming & expensive, relying either on subjective tasting panels (RE: the human nose equipped with egos, & some with anosmia, has a number of other drawbacks including slow evaluation & assessor fatigue) or chemical analysis using gas-mass spectrometers.

So goodbye to OCD reviewers whose voracious sex after a night of belching lobster rolls & pork belly sandwiches led to spitting out indiscriminate lists of notes filled with so many zany descriptors cribbed from the movie Sideways & old Soundgarden lyrics with a dash of RHCP.

Humans possess about 5 million scent cells (substantially less for those who cauterized their nostrils thru countless party amenities). Wolves by contrast have 200 million to smell their prey more than a mile away. In terms of receptors, the capacity is less skewed. Our scent-limit for discerning a variety of aromas has been scientifically measured at around a half-dozen, except alpha-tasters can quadruple that number in a game called ‘Sniffy-Sniff’. Here’s how to play along at home with chocolate:

Always best, they say, to conduct ‘formalized tastings’ first thing in the morning… even if nature calls with runs to the bathroom. Start by picking a scent – could be any scent – let’s see what sticks to the palate walls… for instance ‘this bar bathes the taste buds as a bar of soap does the skin & smells like yummy hair spray atop a drop of excrement blown out to a sea of mouthwash… yes, holy writ as Sanskrit & mirrors the beautiful Hindu Goddess Lakshmi… so if you’re feeling kinda Minnesota, this will make you look Californicated’. Then pass out ratings based on the most severe grade-inflation (kissing ass helps procure free product from chocolate makers in the future): 9.9. Yeah, that’s a good score (the .1% deduction owes to a trace amount of detectable ‘open fish gill’, a colorful descriptor for ‘saliva bearing last night’s seafood dinner’ that was just a fraction too minute to warrant a perfect ‘10’).

All just a minor aspect of the master-slave / maker-critic incest. ‘Gee, one of the great things about this job is all the free chocolate… I feel like a kid in a candy store, only now big bull in a fine china shop… plus ego-surfing the web is really cool too… & seeing which me has been optimized for Google search results: AWESOME!’

Prepare to self-destruct choco-foggers (re: bloggers) or get rolled over. There’s only as much time left as it takes a computer to figure cacáo’s myriad complex of flavor compounds (some 750+ & counting). Maybe a year or two… or longer.

That this might represent the end of the world as we know it means the C-spot™ by then shall morph into the C-bot™ – all part of the man-machine merger… electronic tongues on the way to multi-sensory micro-systems. And we’ll feel fine. As fine as supercomputer HAL in a bout of emotional technology pleading with astronaut Dave Bowman in 2001: A Space Odyssey. “Dave, stop. Stop, will you? Stop, Dave. Will you stop, Dave?… My mind is going, I can feel it. I can feel it.”

And why is that, Hal? Because brain scans show that although humans possess fewer receptors than other mammals, Charles Greer at Yale University says that the human nose & brain are unusually well connected, with each group of receptors linking to many more neural regions compared to other animals. Possibly for the same reason, a dog’s sense of smell rates superior to a rat’s despite a third fewer receptors. That nose-brain connection might equalize the disadvantages of sheer receptor numbers in our ability to process incoming scents. 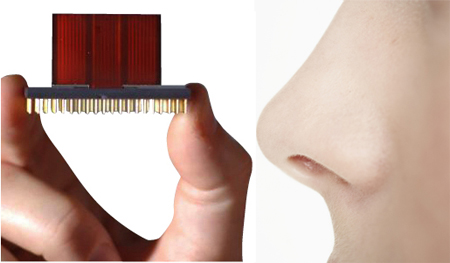 E-Nose-to-Nose: Sniffing Out the Competition