To raise the bar, we believe – 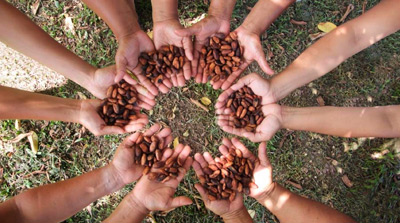 Together we can have our chocolate & eat it too. By demanding premium chocolate we incentivize growers to preserve rare heirloom cacáo strains. This in turn helps preserve the environment. Additionally, we bestow recognition on the peoples & places – especially Amerindian communities – responsible for an incredible invention, bringing one of the world’s great plants to fruition. It’s our small, near-native way to help reconcile & advance global relations… building those bridges one bar at a time.

The good news: once you see the light, you’ll never look at chocolate the same way again. It not only tastes good, it’s good for the planet, & good for the collective soul. And cacáo, once literally sacred & noble, then mass-produced & impoverished, regains its former glory.