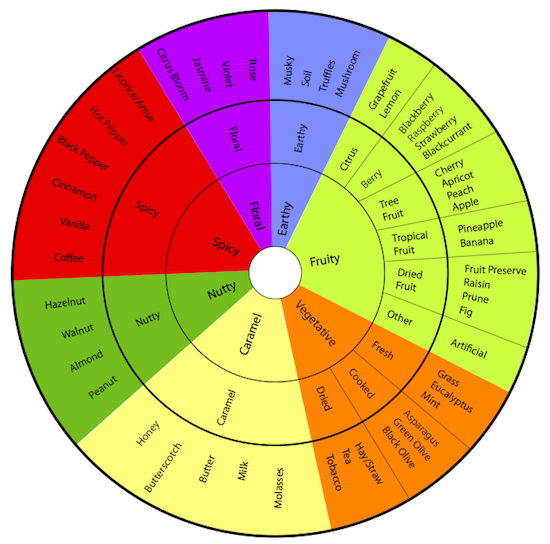 The kaleidoscope of chocolate’s flavor-spectrum subdivides into 7 basic profiles (links listed on the left). A given bar often possesses multiple flavors; one of them, however, usually predominates to determine its profile. Each bar here represents a corresponding flavor-profile based on best-of-the-breed. 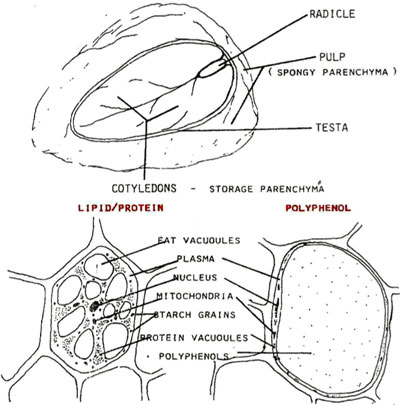 A cacáo seed / bean contains hundreds, perhaps over a thousand chemical compounds, several of which are primary ‘flavor flags’ or ‘flavor pre-cursors’ transformed thru – 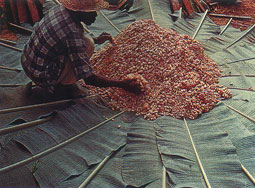 1. Fermentation – arguably, the majority of a chocolate’s potential end-flavor is realized during this crucial stage; pulp inside the cacáo pod can be fermented, or incubated, & in the process impart flavor precursors to cacáo seeds / beans. Cacáo pulp contains about 80% water & starts sterile with an initial pH of 3.5.

Natural sugars (sucrose), largely derived from this pulp surrounding the seeds / beans, when A) placed under anaerobic conditions (the absence of oxygen), temperature reach between 80ºF to 90ºF (32ºC – 38ºC) in this 1st & shorter phase of fermentation (1-2 days) promotes the activity (re: energy) of wild yeasts (single-cell fungi dominated by the species Saccharomyces cerevisiae a/k/a brewer’s yeast) as well as yeast isolates sometimes found on the surface of cacáo pods (& even human hands making contact with them & production equipment used in the process) which multiply &, via autolysis (enzymatic breakdown), decompose sucrose into reducing sugars (simpler fructose & glucose), alcohol (altered by the addition of an –OH group to form ethanol; think beer, wine, etc.), & CO2 (carbon dioxide, same chemical for leavening bread). B) Resulting bacteria (such as ‘acetobacter’ or ‘lactobacter’) dominate the 2nd & longer phase of fermentation, an aerobic phase (i.e., in the presence of oxygen; better estates turn their beans periodically to increase oxygen levels in the pile, decrease the chance for mold growth, & ensure even fermentation) & oxidize alcohol into non-volatile lactic acid then acetic acid (quite volatile – the main component of vinegar). These acids, along with exothermic heat generated during fermentation that can reach 120ºF+, start the process of slowly penetrating the beans by breaking down their cell walls, permitting enzymes access to substrates (mainly cacáo proteins) then “chewing” them into constituent peptides & amino acids to soften polyphenols (complex molecules — C6H5OH), which, in tandem with the alkaloids theobromine & caffeine, account for much of a chocolate’s bitterness & astringency. Specifically, 2,5-diketopiperazines & flavan-3-ols are key inducers of bitter taste & astringency along with astringent compounds – a number of polyphenol glycopyranosides & a series of puckering N-phenylpropenoyl-L-amino acids. C) This oxidation, particularly on the part of the enzyme polyphenol oxidase, causes a browning of cocoa beans that give chocolate its characteristic color. For in-depth analysis, Arthur Knapp’s Cacao Fermentation details the chemical reactions taking place & describes the process down to the level of differing regional strategies.

(above) Phases of Fermentation (from the German Cocoa & Chocolate Foundation) 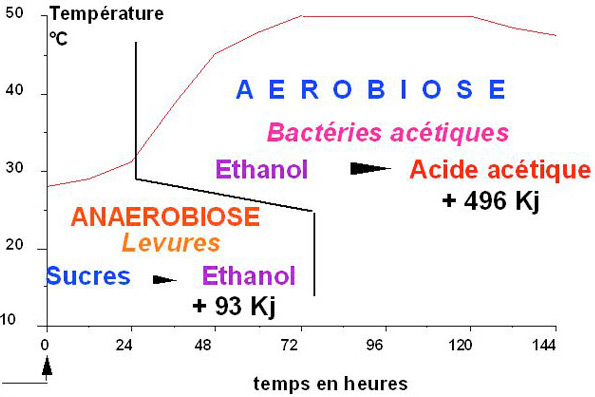 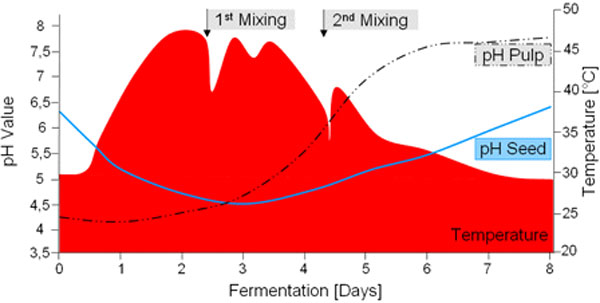 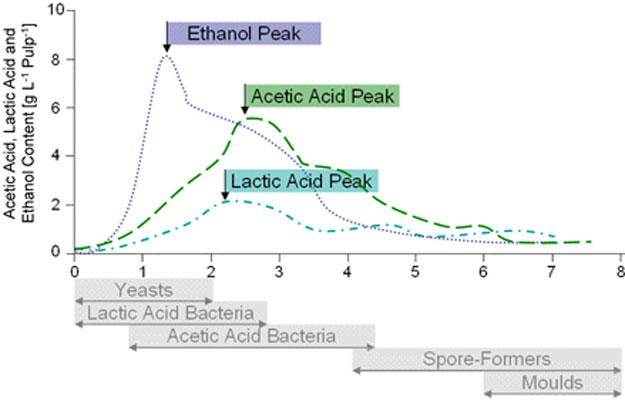 2. Drying – a crucial interim step to reduce moisture content from around >60% in freshly fermented seeds to <8% (post-drying). Achieved either by traditional sun drying laid out on decks or cement patios (weather permitting), or forced mechanical heat in kilns & other systems.

Drying too fast results in crust formation on the husks that trap water inside which invites mold. Too slow retards the removal of builtup acetic acid.

3. Roasting – compounds generated thru fermentation are further developed when heated in a process called Maillard Reactions, after L.C. Maillard who described them in 1912. Defined as the browning of an amino acid by a reducing sugar – a carbonyl group – it fuses new molecules called melanoidins that are brown which enhance chocolate’s color (& different from ‘carmelization’ which is simply sugar browning without any aminos present). Maillard Reactions can convert tannins, depending on degree, into neutral tasting phlobaphenes that result in less bitter / less astringent chocolate & produce a broad array of aromatic chemicals such as aldehydes, pyrazines, phenyl-enales derivatives, furaneol, hyroxymaltol, & cyclotene that contribute to flavor formation. Aside from these chemical reactions, other variables in roasting like temperature duration & curve (the rate & contour of low-to-high then back to low) are crucial keys to the code of the chocolate arts allowing a bar-smith to control the final outcome, as is whole bean roasting for superior flavor development (rather than just nibs or cocoa-mass) since the husk or shell around the bean helps to lock-in aromatic oils from evaporating… securing more overhead & greater flexibility in the next step… 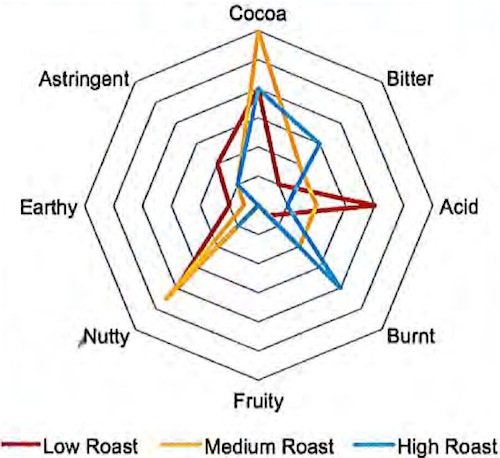 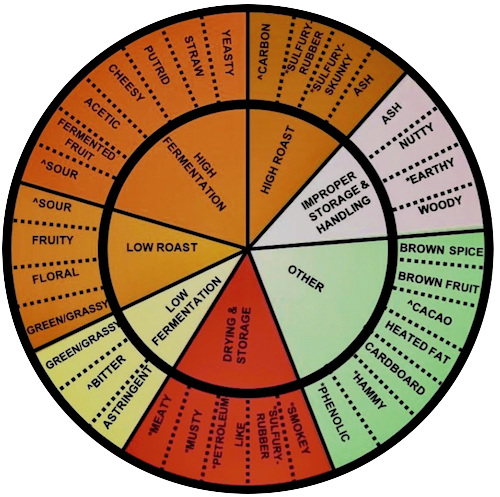 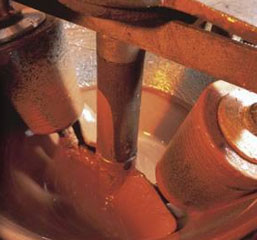 4. Conching – the last major step in the processing chain for a bar-smith to effect flavor & overall sensation. Arguably the most important & the one that calls for the greatest skill & judgment, it, in a nib, alters flavor, changes structure, reduces moisture, & improves emulsification. Conching, or churning, further refines chocolate into a high profile by evaporating excess moisture, driving off residual acetic acid & other volatile chemicals. Not merely a reducing agent, conching, especially utilizing an advanced unit, can conversely add to flavor development, releasing / increasing the levels of favorable aromatics. Variables include speed <-> friction <-> heat: low-shear/friction vs. hi-shear/friction; hi-heat vs. low-heat; short-duration vs. long… & their maddening combinations. It’s a delicate balance with the always-present fear of overshooting the intended target. A crude rule of thumb: more conching equals better texture / smoother flavor. Reality is naturally more complicated than that. Cocoa particles coat cacáo’s fat molecules during conching to form little packets that slowly release their flavor as they melt on the tongue. While unconched chocolate presents a randomized mass (its “naked” cocoa particles yielding “spiky” flavors), too much conche & even good aromatics are driven off & the overall profile flattens out. Conching also largely finesses a chocolate’s texture, generated by reduced viscosity & dispersion of cocoa solids in the cacáo butter. Measured in micronization of those solids (a micron = one one-millionth of a meter), the lower the microns, generally the finer the texture. Here again, however, conching can work against itself if particles become too small. A tongue may experience microns below 12 as gum. The ideal sweet-spot flows between 16 – 25 microns where a bar’s velvet sensation reaches silken bliss. 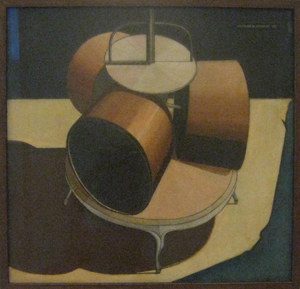 Langston Hughes asked: “What happens to a dream deferred? Does it dry up like a raisin in the sun?” Yes, and that too has value & possibility, encapsulated in the adage ‘the darker the skin, the sweeter the juice’. In cacáo’s case, each of its components still has individual abundance to flourish by themselves. Seeds can be processed without undergoing fermentation (usually rendering simple straightforward cocoa flavor, devoid of nuances often found in the fuller spectrum – particularly high fruits & flowers) or without roasting (leaving a flatter profile). And pulp can have an appetizing taste all its own (& if of a certain scent it serves as a sensory pre-cursor to identifying fine-flavor cacáo in the field). But the benefit of integration is that once all forces come together, they’re far greater than the sum of their parts. 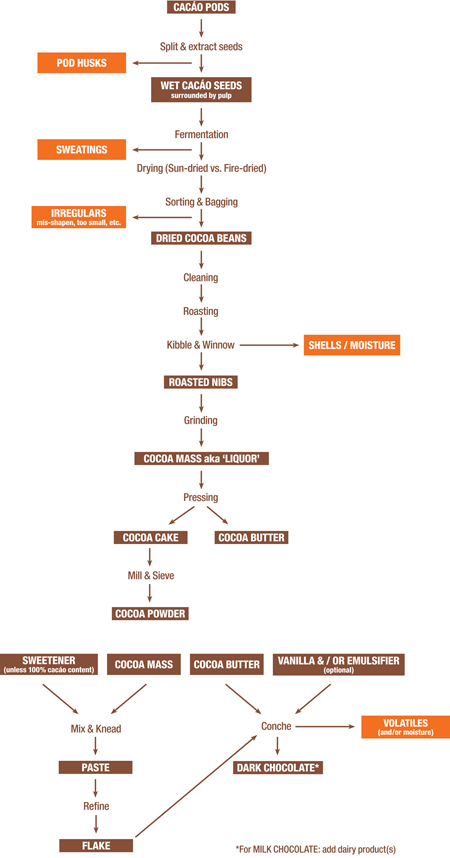 Just as in ancient Rome, natural gas-powered furnaces today burn at up to 2,000ºF for 24 hours to smelt sand into glass for windows, bottles or a cell-phone monitor, the basics for making chocolate still incorporate the Mayan methods deep inside modern machinery. This chart, showing the most important processes employed, reveals a system linking together distinct steps, each important in their own way along the value-chain in aggregating chocolate from innumerable subsidiary compounds, themselves perhaps the outcome of many others, in what appears an infinite regression triggering a flavor-reactor in which everything connects to… everything else. It helps explain why the same bean, in the same hands, from the same batch yields asymptotical results – a term borrowed from geometry that means a line tending ever nearer to a curve without intersecting — & the mind-bending consequences of infinite-zero. In other words, rarely ever exactly the same.