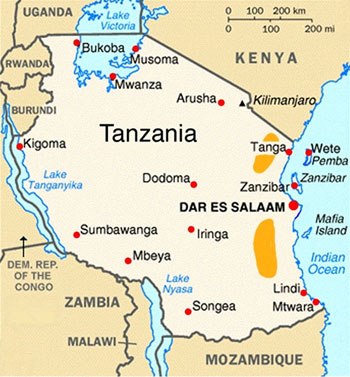 If theories stand up, Africa represents the ground on which cacáo has come full circle.

Cacáo came to Tanzania from several places. During the late 19th century Germans established the original site at the 300-acre Sigi Segoma Estate (Tanga) around the Usumbara Mountains in the northeast section of their then-East Africa colony with seedlings probably from Cameroon of Amazon heritage. Fruits struggled in the alternatively colluvial brown loam & red clay soils. These days it only produces a marginal amount having been largely neglected.

From there cacáo spread to Mbeya & parts of Morogoro (the latter the 2nd highest producing region in the country now). This expansion included introductions from other parts of the world, Ghana & Nigeria among them.

The British harvested cacáo at the southern tip of its Uganda colony along Lake Victoria bordering Tanzania, including at the Botanic Station at Entebbe. These were hybrids bearing some Criollo but mostly Amazon in the mix, rooted from the 1880 / 81 Trinidad harvest. These may have spread naturally as rumors of tiny plantings in Kigoma (near Burundi) persist but nothing verified – no exporters / buyers operate in that area, nor is there any domestic consumption.

No evidence of large-scale cocoa production on Unguja (the main island of Zanzibar), just a few trees here ‘n there to show tourists on Spice Tours. Criollo descendents of the original plants that sailed from Mexico to The Philippines in the 17th century, & on to points farther south & west in the Pacific, supposedly wended their way eventually to Zanibar via Mauritius (& more circuitously later on from Grenada). But a mzee (elder) explains that “there is no cocoa for export as all plantations have died after the revolution”, referring to the 1964 Zanzibar Revolution.

The government has taken steps towards creating a National Cocoa Development Strategy. The consensus is that Tanzania has great potential thanks to good flavor, available land for expansion, & a Public-Private Partnership to further develop the industry with numerous exporters seeding the landscape.

If theories stand up, Africa represents the ground on which cacáo has come full circle, traveling westward by way of

Oceania & eastward over the Atlantic, fulfilling prophecy that one way or another it all goes back to the mother-continent – & perhaps coming back home if we’re to believe ‘Gandawan distribution’ that an ancient southern super-continent once connected the Amazon to Africa, possessing cacáo’s ancestors. (To further fuel a gaia-hypothesis about interconnectivity, cacáo belongs to the family Sterculiaceae, which also includes the genus cola nitida – the kola tree native to Africa; think global giants Coca-Cola & Pepsi).

In short, Tanzania has been surrounded by cacáo. Today it produces a decent-grade hybrid, with Criollo sneaking up in the profile; a rich gemstone base to a multilayered panorama of flavors still unfolding. Very much the story of cacáo, like life itself… in a state of constant evolution… 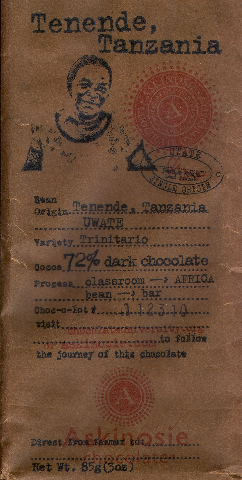