GEN’L CHARACTERISTICS: tales of dark purple cotyledons (beans) that transfer to deep purple in the color of its chocolate bars are unfounded myth-information for archetypal Nacional exhibit white / pale beans or pale red / purple ones (once fermented, however, they darken as do almost all cacáo types); true Nacional are homozygous & moderately large; pods usually bear a yellow-orange tint when ripe, oval shape of semi-smooth surface with shallow ridges; seeds/beans surrounded by potent citric-floral pulp & typically larger / rounder than those of other varieties yet require shorter fermentation cycle, as little as 1 to 2 days (compared to 4-7 for most strains) optimizes inherent floral perfume

To some an Amazon; to others a 3rd varietal unique from it or Criollo. All agree to its long reputation as fine-flavor cacáo – that is, what’s left of it.

DNA analysis confirms what C.J. van Hall in 1932 & F.J. Pound in 1945 both suspected, namely, that Nacional is a single uniform subspecies of small genetic range, remote from Amazon types & unrelated to Criollo. Likely to have originated in the foothills of the Andes drained by tributaries of the upper Rio Marañon (specifically along the Rio Morona) where it prospers still as when Pound noticed striking similarities to this special variety planted elsewhere on his trek thru the rainforest.

In 2010 Dan Pearson of Marañón Canyon Cacao brought to the attention of conservation geneticist Dapeng Zhang & pathologist Lyndel Meinhardt an unusual find while on a cacáo rescue & recovery mission: genuine Nacional growing in Peru. Unusual in that Nacional was thought to exist only in Ecuador. This substantiates what La Condamine in 1745, Pound in 1938 & Bartley in 2005 had all previously documented & provides more proof that natural geography trumps national boundaries.

The name ‘Nacional’ however has come to stand for Ecuador’s traditional native cacáo (its ‘national brand’, so to speak), stemming from the introduction of foreign varieties starting around 1890 & accelerated in 1918-1920 to counter the dreaded Witches Broom disease. The name was adopted to distinguish it from the newcomers that largely supplanted it, converting one of the more homogenous cacáo populations then in existence, & of such high renown & quality, into a kind of genetic móle. Sadly, most of these ‘resistant strains’ were failures, causing farmers to either switch to other crops like bananas, or abandon their plantations altogether.

Preuss in 1901 surveyed Nacional before those foreign strains became rampant. He noted traits that include green coloring that yellows when ripened, big broad shape, thick somewhat rough husks, large seeds, & the characteristic light red/purple cotyledons. In the 17th century its cultivation centered around the Rio Baba extending thru the Guayas Basin, spreading out to the coast of the Manabí Province as well as in pockets actually south of Guayaquil, for instance Balao & Puná Island.

Possessing the best of both worlds – solidity of Amazon / subtlety of Criollo – without being a hybrid of either (unlike Trinitario), all adds up to rich & delicate with depth… when & where & if it can be found.

Those now-rare, rather lone trees scattered in pockets throughout the country are kept up for sentimental value, an emotional attachment stemming from being planted by grandpa. Growers see little point cultivating a tree that experiences up to 70% crop loss at the hands of diseases when sturdier more resistant clones only lose, say, 50%. Correct, the dirty secret in the cacáo groves: far from immune, clones suffer devastating attacks too, but 20% can be the margin of economic survival.

Attempts to transplant it elsewhere have met limited success. Just as Criollo thrived in the wild but fares rather poorly under domestication, Nacional trees grown outside of Ecuador rarely generate the floral finesse found in its home turf. Theories abound ranging from Ecuador’s singular weather patterns, to the warm offshore currents, & even El Niño – taken together an argument for terra being the prime factor trumping genetics, a conclusion at odds with preliminary studies comparing genetics vs. environment… a chocolate version of ‘nature vs. nurture’.

NOTE: ‘Arriba’ has become erroneously synonymous with ‘Nacional’. In Spanish, Arriba means ‘above’, referring to cacáo grown in the region ‘above’, or north of the Spanish ship-building port of Guayaquil in the Guayas Basin. It once was used to distinguish this region that grew the traditional ‘Nacional’ cacáo. Nowadays it’s simply an exotic trade name & neither designates a genotype nor even a well-defined geographic area anymore.

In the opposite direction, Cacáo Abajo denotes ‘below’, around El Oro for instance, marked by progenies of early hybrids.

NOTE II: The term Refractario circulates in the cacáo underground, the affection of a whisper campaign about a possible rare esoteric breed. It refers to ‘resistant’ germplasm selected from the coastal valleys in Ecuador during the 1920s & ‘30s from survivors among seedlings infected by Witches’ Broom (caused by Crinipellis perniciosa), several of which went on to constitute the NAL and EET clonal series. 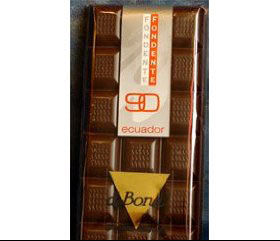