CHARACTERISTICS: what was once a foundation of true Criollo has crept into a mixture of hybrids now based on Amelonado

Asia became the 1st recipient of cacáo outside its American homelands. Accounts vary but starting in the latter half of the 17th century, a Spanish galleon transported pure Mesoamerican Criollo across the Pacific to the Philippines. Many place the date at 1663; others 1666. The oldest documented record, however, is 1670: a single plant leaving from the port of Acapulco, Mexico. Once safely harbored in The Philippines, cacáo began its global journey, moving farther westward & onward.

As if conquering the New World weren’t enough, Spain fed its appetite for expansion by colonizing the many island puzzle-pieces that join The Philippines, an entrepôt for the exchange of a global emporium of goods so that the rich can sip cocoa from the Americas or tea of India poured from a Mexican silver pot into a Chinese porcelain cup, accented by spices from Southeast Asia while wearing silks from there too, paid for in part by gold out of East Africa… & slave labor. Opium then became the tonic for what Steve Almond in Candy Freak called the ‘stinking wisdom’: that these hooked fancies stoked the engines of history, discovery, & misery to bring abundance on the cheap & eventuate democracy. All of it sweetened in sugar cane.

Unlike Asia as a whole, Filipinos were early converts to both chocolate & Catholicism, which went hand-in-hand with Spanish merchants & Jesuit missionaries conquering these islands in 1543, the same year Copernicus radically altered the planet-count. 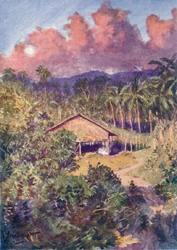 The first migration of cacáo outside its American homeland appears to be pure Criollo leaving the port of Acapulco (probably uprooted from valleys cultivated to the southeast in around the then-called town of Tecuanapa) on Manila galleons. Crews carried chocolate onboard for drinking on ship. It would comfort them during sailing nightmares plagued with bad food, outbursts of some epidemic or other, & the occasional storm… arriving in The Philippines in 1666 (or thereabouts, introduced by Jesuits trailing the Spanish conquest of The Philippines by Legazpi & Salcedo), although Fray Gaspar de Augustín’s Cronista de Filipinas records the date at 1670 — transported by Pedro Brabo who handed off the cacáo to Fr. Bartoleme Brabo in the Carmarines, Luzon.

Francisco Manuel Blanco, in his comprehensive Flora de Filipinos, reports that this plant was the source of most cacáo still growing in the country at the time of his book’s publication in 1837, by & large confirming an earlier account from world voyager Gemelli Careri’s travelogue – Giro Intorno al Mondo – printed in 1699 of his 2-month visit there during which his hosts suspected the eccentric Italian for a spy of the pope & so opened every closed door for him: “They have brought from New Spain [re: current day Mexico] to The Philippines the cacao plant, which has multiplied so well, although it has degenerated a bit…”

In addition to uncertain dates, claims arise that the Pamplemousses Garden on Mauritius, rather than The Philippines, was first on the receiving end. It had cacáo at least as early as the late 1600s. Then there’s Celebes (Sulawesi) where locals insist that cacáo arrived in 1560, a full century beforehand.

Whatever the circumstances of the date & place, descendents of this Criollo transported on the Manila galleon formed the foundation for the first plantations in Indonesia, Malaysia & beyond, once cacáo spread farther in its second stage of dispersal around Oceania.

Eventually hybrids & the introduction of Amelonado in the second half of the 20th century came to comprise the bulk of The Philippines harvests. 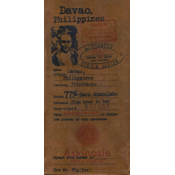