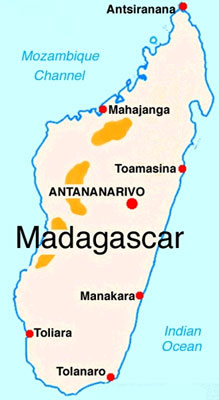 CHARACTERISTICS: mixed bag of hybrid gems set in a significantly Criollo foundation, some of pure enough germplasm to all but dispel notions that the strain is too fragile to stand on its own

The oldest island on earth – 65 million years, dubbed the “8th Continent” on account of its size, biodiversity, & uniqueness. 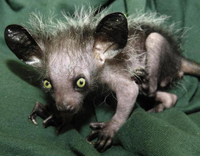 Once joined at the hip to India, the island of Madagascar separated from it (shoved in opposite directions at an accelerated speed per chance when an asteroid struck Earth) – eventually settling off the SE coast of Africa – & in many ways a world apart from both. All that time in isolation made it a Darwinian playground, its menagerie of animals & cornucopia of plants evolving into utterly original forms that are endemic to the island, found only in Madagascar. The pygmy mouse lemur, for example, may be the smallest primate on Earth & lends its name to the Lost Land of Lemuria, that supposed underwater continent now submerged in occult myths.

Beyond that, culturally & demographically as well, Madagascar lies much farther from Africa than the geographic distance separating the island from the continental mainland lets on. The original inhabitants were Asian/Austronesian, speaking Malagasy, belonging to the Malayo-Polynesian language group. The island then landed alternatively in the grip of Brits, French, & Germans throughout the colonial era, & the result of this admixture feels a little soulless.

Known more for vanilla – Madagascar produces half the world’s supply – than for cacáo but it’s the latter that recently has generated lots of chocolate buzz. A mixed bag of hybrid gems set in the Indian Ocean, implanted early on according to Bartley via the Pamplemousses Garden from Mauritius, hence its membership in this section of Oceania.

Settlers made an aborted attempt at commercializing cacáo in 1895-6 just when France assumed control of the island, offering security for foreign investors to develop new ventures, mainly in agriculture & mining. A few years later another try was endeavored on the East Coast around Toamasina, using Caribbean transplants rumored to be from Martinique &/or Trinidad. Proving difficult to grow, that too was progressively abandoned in favor of more lucrative coffee & spices.

In 1906, A. Fauchère published Culture Pratique de Cacaoyer et Préparation du Cacao, writing that only Criollo could be found in Madagascar. Unsubstantiated claims that these were offshoots of the original trees to leave their Mesoamerican homeland circa 1670, heading first to The Philippines, then transported much later to Madagascar, give way to a competing scenario that their source can be traced ultimately to Venezuela-Guyana, though geneticist Dr. Juan Carlos Motamayor suggests Surinam – if at all.

These are mere clues… until geneticists conclude DNA profiling begun in 2011.

40 specimens tested by the USDA Beltsville lab solidify that Madagascar hosts an abundance of special gems among a cultivated array. Yes, the diversity includes plenty of morganatic crosses & hybrids making it into the island’s gene pool. But the degree of homogeneity, or consistency, in certain samples startled geneticists Dapeng Zhang & Lyndel Meinhardt. Specifically, some trees bearing pure Amelonado & others ancient Criollo (even a handful nearly identical to the baseline reference or bulls-eye match for the genotype — Criollo 13). Their preliminary assessment traces the origin of these genuine types to, speculatively, Central America. (West Africa, whose cacáo production is built upon a foundation of Amelonado, is currently being ruled out since very little purity of that cultivar has existed there for some time.)

Further adding to the jigsaw puzzle, Alan McClure of Patric Chocolate developed a keen interest in Madagascar cacáo because for awhile it was the only origin represented in his line. He brings to the subject the same level of meticulous & rigorous methods that his chocolate-making attests. A self-taught historian, McClure dug into the archives, combing thru primary sources, & concluded that cacáo’s provenance here is a confused mess.

Hence, the best guesstimate: it landed via the following route –

The picture gains a bit more clarity when connecting McClure’s findings to the DNA analysis & the fact that cacáo finally took root for good with another Frenchman – Millot – who planted 50,000 hectares around Ambanja in 1920.

According to Bertil Åkesson, the proprietor of one of Madagascar’s prime cacáo estates, reliable information based on this property’s archival record documents that the first cacáo trees planted on Millot’s land were grafts from Java, specifically the Buitenzorghe Botanical Garden, renamed Bogor after Indonesia’s independence. Millot imported a diverse though highly selective mix of Criollo & so-called Trinitarios which may have also included varietals already growing on Madagascar’s East Coast.

Åkesson represents the keeper of the flame for his family holdings contain one of three estates into which Millot’s original property has been morsellated or split into parcels. Christened ‘Sagit’, it encompasses 5,300 hectares, cultivating 300 tons of premium quality cacáo, including a fraction showing white beans (due to segregation &/or strong Criollo germplasm), presumably direct descendents of those parents because little cacáo has been brought into Madagascar since then. The other two are called ‘Millot’ which houses the old buildings, & the state-run ‘Cenia’ – both harvesting around 150 tons each, on predominantly monoculture estates (meaning they grow only cacáo & practically nothing else).

Overall, Madagascar produces about 4,000 tons annually, a rather small amount employing but hundreds of growers (compared to hundreds of thousands in Ghana, for instance). Some of the more renowned cacáo here grows in the northern tropical rainforest zone that slopes away from central highlands rich with laterite soil reddened by iron oxides that give the country its nickname — ‘The Red Island’. Poaching, mining, logging, & energy exploration however threaten the natural habitat. Programs awkwardly called ‘Avoided Deforestation’ are coming to the rescue of conservation areas.

Let’s hope the forest can be saved for the trees. Of almost singular acclaim, few of the virulent diseases which ravage the species, particularly in cacáo’s American homeland, are found here on account of seldom having been introduced in the first place, then further protected by the oceans surrounding this island which provide a measure of safety, though by no means an impermeable barrier.

Still, nicely harbored for species conservation, Madagascar has the material for nurseries to propagate “designer-cacáo”. That should translate into improved chocolate, a point raised simply because little of this really matters to consumers unless flavor commensurably measures up.

The Lay of the Land in Madagascar… as of 2011: a genetic map plotting ‘MA’ (for Madagascar) onto benchmark referents contained in the Int’l Cacáo Database