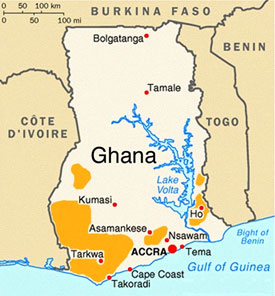 FLAVOR PROFILE: Earthen; rich, often clean chocolate aroma of smooth contour; followed by coffee & nuts, & balancing wooden-bitter with long finish; more fruit hues keep creeping in, pointing to better gene-stock making its way into the crop &/or some noble beans in its past

Throughout the 19th century, the Basel Missionaries, a group primarily of German Christians, went to Africa to teach industrial trades, hoping to create employment for local communities as a means to an end: converting souls. They built 27 schools for boys & girls, with instruction in masonry, carpentry, & bookbinding. One of their apprentices was blacksmith Tetteh Quarshie, who became the Johnny Cacáo-seed of Ghana. Though sketchy, he’s credited with dropping the first seeds into Ghanaian soil – in 1879 at Mampong, north of Kumasi; others however claim the Akwapim Hills near Accra – smuggling them out after a 6-year sojourn in Portuguese-held Fernando Pó (present-day Bioko in Equatorial Guinea). The source of his cacáo undoubtedly would’ve been São Tomé. Less interested in cacáo for eating purposes than as a cash crop, some see in Tetteh Quarshie Africa’s first entrepreneur.

Soon the Basel missionaries heard the call themselves, & in 1889 planted their own estates, with seeds probably from Cameroon after a supposedly failed attempt in 1857 with seeds brought from Surinam. It took almighty belief for any German to move to Africa in 1828: their first volunteers died of malaria. Only one survived in the next wave by putting his faith in traditional medicine & re-locating to Akropong – the official starting point for the Basel Mission in Ghana.

Literally evangelical Bible thumpers, missionary Johann Gottlieb Christaller published the New Testament in Twi, as well as a dictionary still in use. Johannes Zimmermann did the same for another local dialect – Ga. These Protestants also evangelized about economic opportunities as a moral alternative to the slave trade which, though outlawed, was still operating. Precursors of “fair trade”, they saw in their approach “one of the best means of spreading civilization & Christianity in Africa.” So cash crops of cotton, rubber, coffee, cacáo, etc., were planted on model farms.

Historian Andrea Franc has uncovered evidence that the Basels engaged in market manipulation by setting up a cartel, justified in their eyes because Africans were always seeking the highest bid (God bless you, brothers, but welcome to the real world) & worshipped cacáo as a god (as did Mesoamericans & Europeans before them). Their combined works helped convert more than 3,000 souls by the end of the century – a seemingly small number but one that formed the core of its powerful commercial / agricultural trading arm called BMHG. Incorporated as a joint stock company – among the very first – BMHG went on to become the country’s leading exporter of cocoa beans. Earnings would then be plowed back to fund religious activities.

Eventually cacáo became the black gem of Ghana, then-called the Gold Coast, replacing that precious metal, palm-oil, rubber, pepper & slaves as the bulwark of the economy. 1891 marks the initial exports, & what was traded sometimes came back in the form of transplants, including a ‘Cundeamor’ from Nicaragua via Trinidad; a possible ‘White Variety’ from Jamaica; an exceptional type in the 1903 Ocumare – an impressive flavor variety – to the Aburi Botanic Garden; & a notable introduction several decades later of Ecuadorian origin that landed in Tafo. Soon the country’s cacáo production went on large-scale footing. From 1911 to 1976 Ghana took over as the world leader. Bush fires caused its decline but remnants of vestigial Criollo may still be at work in its crop. As recently as 1990, Aburi Garden conserved trees that resembled Nicaraguan Criollo + several ‘Red Criollo’ from Trindad. 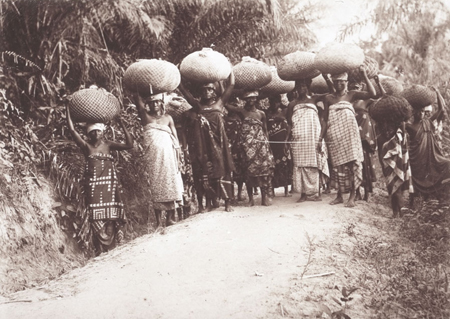 True African Infrastructure: women transporting sacks filled with cocoa beans to port (suburbanites: DO NOT try this at home) in the 19th Century (photo from the USC Libraries’ Basel Mission Image Archive)

Today it’s rebounding mostly with West African Amelonado (a sturdy Amazonian) of Brazilian origin, & some say with a difference.

Before GM got driven into bankruptcy & Govt Motors, there was Govt Cheese & Govt Chocolate. Headquartered in a pink block building on Liberty Avenue in the capital of Accra is the central government monopsony, Cocobod, whose cornerstone was laid by President Kwame Nkrumah in 1957. Its mission: promote the production, quality & marketing of cocoa. Taking a page from the Basel Missionaries, Cocobod engages in price fixing. It also regulates quality control, establishing for instance 3 grades of beans (export, commercial, or waste) & supports the local Cocoa Research Institute to educate growers & mandate best practices like careful fermentation & sun-drying.

Perhaps wishful & fanciful because, though rarely mentioned, beans from neighboring countries Nigeria &, to lesser extent, Cameroon + Gabon get tossed into the mix with those from Ghana. Moreover, in an attempt to slip Cocobod controls, Ghana farmers have been known to smuggle beans, Tetteh Quarshie-style, into Ivory Coast – depending on Cocobod’s fixed producer price vis-à-vis the world commodity market. In response, the Quality Control Division of the Ghana Cocoa Board dispatches anti-smuggling vigilante squads & directs internal security agencies to step-up surveillance. Beans will move in whichever direction the price is higher. Sometimes it fluctuates in favor of Ghanaian farmers, in which case cocoa from Ivory Coast flows to Ghana, as it has for much of the last decade since the fixed-price has exceeded that of the world market price.

It’s difficult nonetheless to underestimate the degree to which Cocobod vertically integrates both the cocoa industry & the entire country. That cocoa accounts for 45%-50% of GDP (depending on election year politics when “bonuses” are awarded) affords the government tremendous levers in exerting control over 9 million growers – so paradoxically decentralized that few even know they belong to the many ‘Fair-Trade / Organic’ co-ops popping up all over the landscape – tending to roughly 700,000 small farms, averaging 400 acres each, mostly owned by women in this traditionally matrilineal society where men are subservient. Enough to cause PC & ERA feminists in the West to eat their hearts out, women here also hold positions from the head of the Central Bank to justices on the Supreme Court. And because it pervades virtually the whole society, the deference shown to farmers is generally sincere. Charges of exploiting child labor & lethal exposure to agricultural chemicals tends, therefore, to be sensationalized (remember, given the structure & composition, they’d be jeopardizing their own children on their own family farms) just as such charges may be under-reported in neighboring Ivory Coast. Though these two countries share a common border, their histories of nation building, land reform, & structural economics are different. When Ivorians dismantled their own sort of Cocobod, a Stabilization Fund called Caistab, they effectively lost control of their cocoa sector.

That aside, all West African countries still practice “pioneer farming” – an unsustainable form of intensive mono-crop sun-farming that clears forested areas & requires massive inputs from petroleum-based energy & fertilizer. These methods generate higher short-term yields but quickly degrade the soil while the lifespan of trees gets cut down from 75 or so years to less than 30. When these trees die, the land becomes exhausted… farmers move on… to clear more forest… planting more cacáo… & the cycle, a kind of slash-&-burn, continues. 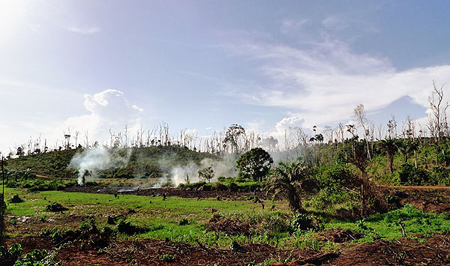