Wanna make your own chocolate? Thru the ardor of romancing the bean, John Nanci, the professional science chemist in The Chocolate Alchemist, has become the pied-piper of the New American Craft Movement. Many a home-based & micro-batch processor has gotten a start & sourced their initial supplies from him divining his know-how & cacáo seeds – some going on to fame & reverse fortune (investing thousands to make hundreds). But the real payback, of course, comes in producing a world-class bar that hits everybody’s C-spot.

If it ever gets written, one of the few chocolate books worth reading would be John’s chronicles on busting the myth of those who said that home-made bean-to-bar chocolate couldn’t be done because it’s overly complicated, too messy, & prohibitively expensive. Truthfully & regrettably… it is. To paraphrase T.S Eliot, making chocolate would be easy were it not for bitter beans, which only emboldens the DIY-tribe to over-achieve & just do it; breaking the mold, inventing compact tools, & perfecting a process so generations to come will have at it & think no more of it than a self-service gas station to prove the 5-star Chef Gusteau’s maxim that anyone can make chocolate. And with the onset of global-warming, they’ll be growing cacáo trees in their backyards! (Added Bonus: no more shady deals trying to truck shipment containers from the tropics).

Whether consciously or intuitively, Nanci knew at some level it could be done because it already had been done. How, after all, was it achieved at the beginning of the the Industrial Revolution when Western chocolate manufacturing got its start with neither machines yet-to-be-invented nor the Internet to compare notes & exchange ideas?

To borrow Steve De Vries’ motto: ‘A Hundred Years Behind the Times’.

Colonial Americans rigged up their own chocolate mills using homemade equipment that were powered by foot & produced small quantities. Besides chocolate, these could also grind oats, wheat, spices, coffee & tobacco.

The Centennial Expo held in Philadelphia in 1876 to celebrate America’s first century, showcased a comprehensive exhibit by Henry Maillard of the incremental steps in transforming raw cocoa beans into chocolate.

At the 1893 Columbian Exposition in Chicago, J.M. Lehmann did likewise with more compact German-engineeered machinery. (At the same event, Milton Hershey — then a caramel maker — decided to switch his operation because he felt caramels were a fad & chocolate is forever.) By the time of the St. Louis Expo in 1904, Walter Baker & Company brought out miniature equipment for chocolate making.

Nanci & his band of barsmiths then are the hiers to these original chocolate craftsmen. 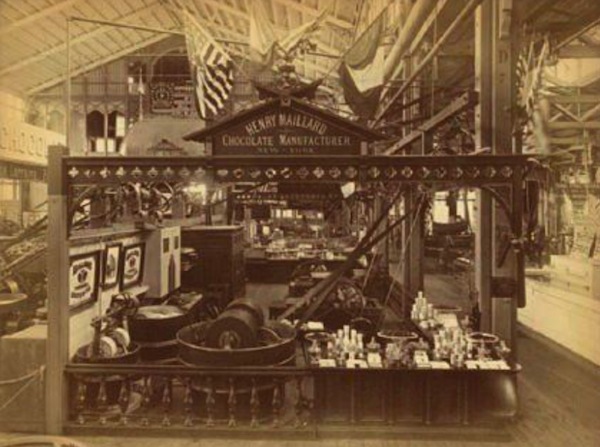 The superheroes of independent micro-processors at the forefront of chooclate’s retro-evolution in the USA, all using traditional methods, many of whom got their start with Chocolate Alchemy (see above), have banded together to form this site.

“Sustainable”, “Fair-Trade”, “heirloom” & “Rain Forest Alliance” chocolate are all for the good, no? Ahhhhh, get a taste of reality-chocolate in Cristian Melo’s PhD dissertation – Left Behind: A Farmer’s Fate in the Age of Sustainable Development. Melo details how business caters to consumers with a smorgasbord of labels & certificates that declare chocolate of superior ethical & environmental values. In seeking to bridge the distance between producers & consumers, such schemes often close the gap with a bandage.

Many have become increasingly aware that the globalization-drive to consolidate agro-food has left them with less freedom of product choice, exposed them to health hazards, & made them unwitting accomplices in a process of rural impoverishment. This could be reversed, in theory, by engaging shoppers to buy goods that embody superior values. Alternative trade hopes to maximize those values at both ends of the commodity chain in a system that rewards consumers (with guilt-free, value- added goods) & producers (paid premiums over the market price). These networks bypass highly-controlled commodity chains via market-based tools to challenge the industrialized food giants. The global community benefits because alternative trade actors become stewards of non-transactional public assets (such as ecosystem conservation).

That alternative trade creates virtuous circles around producers & customers to transform daily consumption into an act of global citizenship that can increase growers’ revenues also comes with the incalculable benefit of “gaining respect”.

Melo warns however that when this utopian vision meets reality a race to the bottom often ensues. It includes fickle markets, crafty middlemen, absent credit lenders, jilting candy companies, commodity fixing, & int’l agencies that impose a 1-Solution-Fits-All regime at the expense of cacáo growers. The impact of manufacturers advertising vaguely “green” notions & romantic appeals to meet consumer demand for “ethical” chocolate does challenge, frankly, many of the editorials found in the C-spot’s™ Crush Pad — except when it comes to mixed-crop organic farming.

If pressed for time, the Introduction [pages 1 – 10] & the Conclusion starting on page 186 provide excellent overviews. Or, to sum it up in a nib & paraphrase his parting remark: chocolate in pursuit of some Northern consumers’ fantasy via certification games (Fair-Trade, UTZ, Bio-for-Life, etc.) often forfeits the wisdom of farmers’ hard-earned experiences — & thus fail… when the funding for these certification projects dries up & the army of NGOs & consultants move on to greener pastures—the farmers are who remain on the land… left behind.

What John Nanci has been to the bean-to-bar movement in North America, Pam Williams is for boxed chocolates. Her online chocolatier course – Ecole Chocolat – instructs many in the culinary skills of creating truffles, bombones, filled-chocolates & various other assortments, all from the convenience of a laptop or palm device. Lest anyone be fooled into thinking it’s a cakewalk of a curriculum, Ecole Chocolat puts students thru the proverbial cocoa grinder & provides rigorous hands-on training (virtual, of course) from techniques to marketing tips.

The value-add of Pam’s site comes from her Chocomap, a locator of hundreds of shops around the globe (several whom she’s mentored) for any chocolate hound to plot where to go during that vacation or business trip or chocolate EMS, including a few destinations that have climbed into the upper echelons of the C-spot™ rankings.

To top it off, she & Mary Jo Stojak are the driving force behind FCIA (Fine Chocolate Industry Association) that lobbies for better chocolate everywhere… in the marketplace, the halls of governement & all the way to the other end of the supply chain… the growing fields where cacáo is cultivated.

Created as a community where chocolate lovers of all aspects – from cacáo growers to chefs & everyone in-between – can share their questions, answers, & passion for cacáo & chocolate.

This is just one endeavor created by Clay Gordon, the inveterate explorer-educator whose own Chocolate Life spans the millenniums covering practically every facet of the value chain from source-to-sale. His exploits have blazed a trail thru cacáo forests, authoring books, presenting lectures, & giving interviews, plus lots of palate-busting / mind-blowing / tummy-bursting experiences along the way.

Safe to say, the man knows his chocolate. If it’s possible to know too much of a good thing, Clay Gordon might be the poster child. All in the quest of raising the bar.