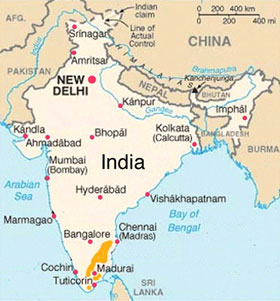 GEN’L CHARACTERISTICS: based mainly on the CCRP clonal series

Many of the great mariners in history have traded up & down the coast of India for the fabled spices of Malabar – particularly black pepper. Its allure sent Columbus searching wildly for a quick passage to it. Missing the mark, he stumbled upon America instead – the homeland of Theobroma cacáo which itself would circumnavigate the globe, & eventually to Malabar.

Among the mostly densely populated places on Earth, where cacáo (or anything else for that matter) fits in is… well, maybe one explanation why such an all-world port has so little of it.

What does grow in the Cacáo Belt of India winds thru monsoon country, sandwiched in the Midland zone between the low lying coastal regions heavy with rice paddies & the Ghats highlands to the west.

R. Ratnam reviewed its introduction into Madras for a South Indian Horticulture article in 1961. In it, he dates the first cacáo seeds back to 1798, arriving from Ambon Island, Indonesia. During the next 50 years, their offspring were planted in various locales, the most renowned being Coimbatore, thought to consist of pure Criollo related to the originals brought here from Mesoamerica via The Philippines. Ratnam also mentions a Guatemalan Pentagonum received in 1873, now presumed extinct.

The modern era, starting with colonial India’s independence from the British Empire in 1947, saw cacáo re-introduced by Cadbury’s at an experimental grove located in Chundale, Wynad near the tea & coffee estates of the Ghats.

Cadbury’s also initiated breeding research at the Kerala Agricultural University which, since 1979, resulted in the release of the clonal series CCRP 1-10 (standing for Cadbury Cocao Research Project). Based on Amazonian genotypes from Malaysia, CCRP has been cloned for high productivity & disease resistance against Black Pod & Vascular Streak Dieback, the twin scourges of cacáo trees in this part of the world.

It is the prime seedling supplied to Indian growers. They’re a loosely organized group scattered about the countryside, typically cultivating cacáo in a mixed crop arrangement, usually under coconut + areca (betel) shade trees. The Indian Organic Farmers Producer Company Ltd. (IOFPCL) however represents one group set on organizing the trade. It lists a couple thousand members throughout Kerala State & the company’s shareholders are the growers themselves.