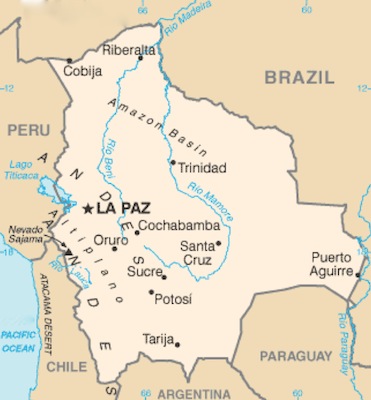 CHARACTERISTICS: a unique type defined as Beniano, the “Nacional Cacáo” of Bolivia

… sits near the southern extremity of cacáo’s Amazonian homeland.

Liberated from Colonial Spain by Simón Bolívar – one of the few men in history so honored to have a whole country named after him – Bolivia is rife with poverty yet rich in natural resources, whence the motto “a donkey sitting on a gold mine”. Or a silver one as the case may be: Potosí. A god-forsaken place, barren as Death Valley with none of the desert’s beauty; just bleak, & temperatures freezing instead of heat, quite the opposite of the capital La Paz’s inviting, warm-spirited, stunning landscape just 250 miles away… but a world apart.

Once Spanish Catholics knew silver could be mined in abundance from Potosí’s 16,000 foot Cerro Rico (Mt. Rich) – the motherlode of all silver mountains – it became God’s country despite a priest describing the pit’s opening as the mouth to hell upon seeing miners conscripted into it by conquistadores tapping the traditional public service of the Inca called mita (from Quechua mit’a, for ‘turn’ as in ‘your turn to get to work’). Essentially mandatory labor, employing humans to do the work of mules, extracting silver ore thru the innocuously sounding ‘patio process’ where stomping feet on the ore forms an amalgam that created deadly vapors & caused mercury poisoning. This draft was commonly known to be so ghastly & lethal that villages held funerals before their men ever departed. Estimates run as high as 8 million Amerindians met their early death in the mine, coining the phrase the “mountain that eats men” & “devil’s miners”.

Modern Bolivia faces similar challenges with its many other natural endowments, including enough lithium to fuel our cars in a battery-powered future. The news is checkered. Once a vast carpet of vegetation & virgin forest, the satellite image below shows dramatic deforestation in the Amazon Basin. Loggers have cut deep gashes into the forest, while ranchers bulldozed large blocks for their herds. Fanning out from these cleared areas are settlements built in radial arrangements of fields & farms. 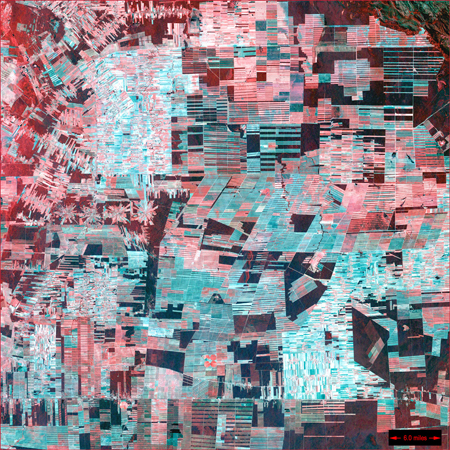 Clear cuttings notwithstanding, those plots under cultivation are sustainably farmed, reports Volker Lehmann of Frontier Ventures Bolivia, a purveyor of fine cacáo to several renowned barsmiths. The rest of the country’s arable lands remain for the most part under forest canopy. Enough so for the Rainforest Alliance “Smart Wood” program to certify that Bolivia holds the largest timber reserves in South America. That wild cacáo contributes to some extent in safeguarding the forest along the rivers of the Bení basin means it can be utilized as an economic tool to prevent deforestation in a region where only 1.5 people per square kilometer live & no massive destruction can be found.

One possibility for this sees converting the coca trade for cocoa instead. Not that chocolate can compete on a purely financial level; it’s a poor step cousin. But when looking at the social & environmental costs, in concert with the principles behind Can Chocolate Still Save the Rainforest… Or Just the Planet?, it just might persuade some skeptics.

Highland Bolivians, many descendants of ill-fated miners from centuries earlier, chew coca in a similar manner to daily commuters in the West drinking a cup of morning coffee except their involvement in the cocaine industry has a sinister downside. Feeling historically victimized, they’ve acquired an exploitative mentality of their own by exacting revenge in overtaking lowland inhabitants.

This internicine conflict owes some precedence to the biography of Simón Iturri Patiño, among the richest men in the world during his lifetime. Known as the “Andino Rockefeller”, Patiño made his fortune as a mine owner. He assumed a worthless deed to a mountain range in a deal-gone-bad that fortuitiously turned out to be loaded with tin — a valuable export commodity. Ostensibly he was of Amerind blood & operated his business as ruthlessly as any robber baron of his era.

Likewise, at one time Potosi ranked as the richest spot on Earth. Its silver, valued for purity, was minted into the longest running & most storied currency in history – the Mexican peso, a key link in the global economy connecting the Americas to Europe & by trade extension Asia too. So fabulously wealthy, Cervantes mentions it with envy in Don Juan. One legend holds the mint mark of Potosí (the letters “PTSI” superimposed on one another) is the origin of the dollar sign ($). And even with cacáo growing all around, including some renowned varieties, they shipped silver all the way up to Central America to buy Xoconochco chocolate!

Little did they need to, for Bolivia sources some of the more fabled bars on the planet. Along the Rio Bení rumors circulate of legendary forests full of ‘wild’ cacáo. Perhaps true, for across the border in Peru, in the ancestral land of the Chuncho peoples (near present-day Cusco), stood ancient cacáo groves known to flourish long before the first contact with Pizzaro & the conquistadores. Conceivably this could’ve extended toward Bajo (“Lower”) Bení & could be the progenitor of the ‘wild’ Rio Beni cacáo which Fr. Francis Xavier Eder wrote about back in the mid 1700s that was considered the best among all.

Indeed, conservation geneticist Dr. Dapeng Zhang conducted genetic analysis of Bolivian cacáo in 2010. The lower one goes on the Rio Bení, the more indigenous & wild the cacáo. That forms the shorthand analysis at least.

The longer course notes that Alto (“Upper”) Bení comprises cacáo transplanted from Bajo Bení. Plus, in the 1960s, the gov’t promoted cacáo to support ex-miners from Oruro who settled in Alto Bení, pushing out the indigene Moxetenes from their homesteads & cacaotales (literally “places where cacáo grows”). To supplement their incomes the gov’t handed out to newly arrived settlers hybrid some cacáo seeds imported from Ecuador & Trinidad, Costa Rica & Peru.

Wherever the precise location along the river, Rio Bení presents a relatively rare find in the world of cacáo today: a sizable area featuring a contiguous crop of closely related if not identical members referred to often by the name “Cacáo Nacional Boliviano”, a misnomer rooted more in political than botanical grounds given that the heartland of this cacáo are the plains of Gran Moxos, today known as the Bení Department of Bolivia. Its name should relate to its phyto-geography & in sync with Bartley’s & Motamayor’s system of classification, as well as to the first who tended to it & still do – the Moxetenes – in christening it Beniano.

In these swampy plains of the Llanos de los Los Moxos, the Jesuits on arrival to Baures long ago spotted this native Beniano plus more along the Mamore & Rio Blanco extending to the Brazilian states of Rhondônia & Mato Grosso (formerly part of Bolivia). Some accounts hold that they also seeded plantations with cacáo from the east of a strain that VJ Soria classified Amazonian Amelonado.

The priests intensified production around Baures & San Ignacio de Moxos. Beans were shipped in the lucrative cocoa trade back to Spain where demand for Beniano’s mellow flavor skyrocketed.

Eventually the Jesuits were expelled from the area & trees now found there that appear virgin forest could well be feral survivors of abandoned territory escaping domestication to return to the wild.

Elsewhere, reports cite abundant presence of a specific type in the Pando provinces.