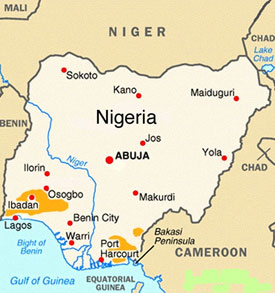 Cacáo here developed somewhat independently from the rest of West Africa. Sprung from a foundation more diverse than its neighbors to the west (Ghana and Ivory Coast), though less so compared to Cameroon on its southeastern border.

It got started by Squiss Banego, a local chief, in 1874 with seed of the São Tomé ‘Creulo’ (an Amazon of Amelonado-type possibly related to the Comum, & not to be confused with the similar-sounding ‘Criollo’). Banego established a cacáo orchard in the Bonny district from where cultivation spread to other parts of the country. Soon, the European Royal Niger Company set up similar properties at Abutshi & Onitsha.

Future introductions included plants from Trinidad to the Nigerian port of Calabar (better known as a key embarkment for the Atlantic Slave Trade); some Pentagonum (a warty Criollo) of unspecified origin; & the Royal Botanic Gardens in England sent plants around 1900 associated with Sri Lanka. The last the ‘Old Red Ceylon‘? Perhaps… for the research center at Moor Estate in Ibadan, Nigeria sighted some self-compatible trees bearing red pods containing light-colored seeds – all hallmarks of Criollo influence.

During the 1960s, Nigeria rose to a cocoa powerhouse, vaulting to the #2 exporter in the world.

Then oil was discovered.

Today, opportunity costs favor crude oil over cacáo & despite rampant BCM (the mirid Sahlbergella singularis, responsible for wiping out up to 70% of the annual crop), Nigeria still ranks as the 4th largest producer in the world as of 2013.

The quality of cocoa is considered to be on the rise again with recent plantings to combat BCM that include insect pheromone techniques & various resistant hybrids / clones straight from the biochem lab bearing clinically-sexed names like Amz15, BE10, UF676, Pa107, SPEC54  & the ironic sounding EET-59.

And the nat’l govt has embarked on a neo-liberal policy to shift the impetus from state-regulated agencies to the private sector under the rubric ‘govt-enabled, private sector-driven’ transformation. Initiatives gearing up with support from seed banks, fertilizers, agrochemicals, & credit agencies signals that Nigeria means agribusiness in the hope to diversify its economy.