… sometimes referred to as Marascumbo. Technically located in Ecuador’s northern “Green Province” that includes Mache Chindul Reserve – home to abundant biodiversity as well as some of the fastest disappearing rainforest in the world, at the hands of oil companies that displace local communities in the wake of exploration & drilling – but ecologically integral to a wider geography that includes the Tumaco area of Colombia, leading a few to speculate that it’s the same as the Cacao Antigo or Pajarito.

One account claims it descends from trees in Ecuador’s Manabi Province. In some pockets – the Nariño Dept across the Colombian border for instance – it’s a cross between Nacional & Criollo; in others it belongs more to an extended Criollo family growing inside an isolated pocket of the Ecuadorian Littoral dating back to at least mid-18th century, perhaps having migrated from the Lake Maracaibo region in Venezuela.

An ascending view holds that these Esmeraldas are a re-introduction of an ancient cacáo, returning home in the late 1700s via a circuitous route after having been transplanted earlier along the Pacific slopes of Mesoamerica (present day Mexico). It may importantly represent the switch point between ancient South & Central American cacáo distribution for Amerindians of the Valdivia culture traveled along the Pacific coast from their west Ecuador home to Middle America since 1450 BC.

Finally, some even theorize a connection to the very origins of the species along the border of Colombia/Ecuador (Nature, Nov 2002, Vol 89, No. 5, Pgs 380-386). All in all a mystery for Ripley’s Believe-It-Or-Not™.

What is known is that many of its trees grow tall with sparse canopies & red colored fruits – both signs of probable Criollo heritage – which tend to be small, of short broad shape, & rather smooth skin. 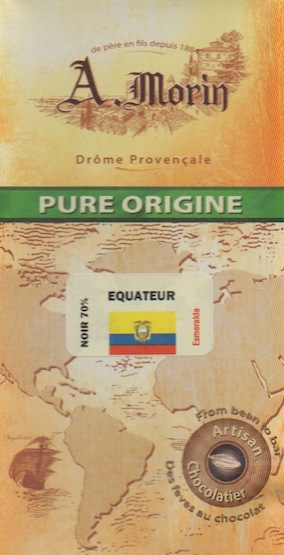