Where other parts of Central & South America in the colonial era contained untold riches from gold & silver mines, El Salvador lacked minerals. But it had cacáo, balsam & indigo, all 3 eventually were cultivated for the lucrative export market to Europe.

Within a century however they would practically disappear…

Cacáo wends its way thru the history & people of El Salvador as a switch point that stretched the Western Hemisphere.

A group known today as the Pipils live mostly in a key ancient cacáo zone of western El Salvador around Cara Sucia. Their language belongs to the Uto-Aztecan family, a dialect of Nahuatl called Nahuat or Pipil. Pipil oral tradition holds that their ancestors migrated out of SW USA into central Mexico & El Salvador, a migratory route that might have had implications for an intercontinental trade network, perhaps even some intriguing connections to Chaco Canyon in North America which is generally left out of the pre-Columbian chocolate narrative. Evidence from archeology & ethnohistory also supports their southward diffusion thesis. However, in general, Pipil mythology is more closely related to the Maya.

Judge Diego García de Palacio wrote that “the draft they prepare from cacao was so highly esteemed that no one was permitted to drink of it unless he were a great personage, a cazique, or a famous warrior.”

On the eve of the Spanish conquest, the chief of one of the 4 social classes among the Pipil called the Izalcos, was very wealthy due to enormous cocoa production. His upper class possessed a great number of cacáo plantations, more than any other in the region, & also controlled production throughout the broader area.

In all of Central America during the 16th century, a major cocoa producing area was the Mayor of Sonsonate, especially the Izalcos region at whose core consisted the following Amerind villages: Tecpan Izalco, Caluco Izalco, & Tacuscalco Naholingo. Again Judge García de Palacio describing it in 1576: “The abundance in these parts along where the river begins & ends in Güeymoco Aguachapa coast & Tonala… rich soil & open sky teeming with cocoa, fish & nuts & other things commonly here & there in the tropics, especially the most abundant of cocoa you know.”

Colonial cocoa production, which began in the 1530s with the Spanish takeover by Pedro de Alvarado who conquered the area, reached its peak between 1550 & 1560, then tapered off… drastically to the vanishing point. Threats loomed all around which led to the demise of local populations who cultivated cacáo.

According to Dr. William Fowler of Vandebilt University, in 1519 the total population of El Salvador numbered between 700,000 to 800,000. By 1550 it fell to 172,255. In Izalco alone, taxable indigenes dropped from somewhere between 700 & 900 to less than 100 survivors. This created a higher tax burden for those lucky enough to survive. The area dried up in a downward spiral & with it resources plus money, to shift its fate & fortunes elsewhere, a sort of housing mortgage crisis its day (think 2012 Florida or Arizona). Conditions worsened to the point where a saying arose — los vivos pagan por los muertos – ‘the living paying for the dead’.

Labor shortages came to a head with the plague of 1578. A demographic collapse became so widespread it affected a sharp decline in the yields of cacáo since few were left to tend their gardens. In just one example, of the 10,000 cacáo trees planted in the town of Caluco, less than a fifth were harvested.

In response Spanish colonists brought in rival Amerinds from Verapaz & to a lesser extent Comayagua, as well as African slaves to usurp the land in order to meet growing demand for cocoa back in Europe. These moves only exacerbated the problems by covering it with an added layer of social tension atop the already exhausted fields where cacáo grew, fatigued by over-cultivation (including higher density planting of 7 feet when the normal separation between trees was 12 feet or more).

This together with competition from cacáo in Guayaquil (Ecuador) & Venezuela, plus a natural locusts plague & falling ash from the Izalco volcano compromised the longevity of trees with devastating consequent results in low productivity.

The decline of ‘el gran cacáo’ in these parts became irreversible. Sonsonate, on account of its fabled chocolate, went from being one of the richest to one of the poorest areas in New Spain. Bishop Pedro Cortes described the scene in 1770: … a closed forest of scrub & trees where you see a lot of cocoa still growing but not only uncultivated, it is feared with reason (re: plague & strife). Soon in ruins, then replaced by bananas.

The documented record of the country’s more recent cacáo inventory is scant. In 1901 Preuss conducted a survey around Sonsonate in the north & San Miguel in the south. The common characteristics he noted included cacáo pods of rough surface containing small but plump & round seeds within.

While it can be hoped that maybe some descendants of traditional varieties survive in the countryside, much of El Salvador’s cacáo seems to have gone the way of the rest of Central America: a hodge-pod of invasive foreign types.

One that still does exist to connect the past to the possible future stands in Joya de Cerén (The Jewel of Cerén in the Valley of Zapotitlán, El Salvador) — a Mayan agricultural village & Pompeii of the New World. It preserves a young cacáo tree with a flower just opening up in ash – from the nearby volcano Loma Caldera which erupted in 590 CE – the oldest known cacáo tree in existence; immediately south of Structure 4, next to the storehouse for Household 4 where inside that building were pots with cacáo in them. 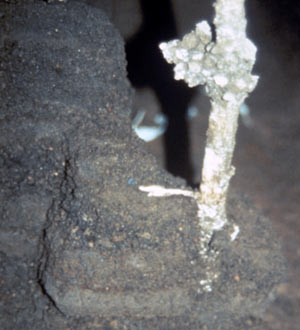