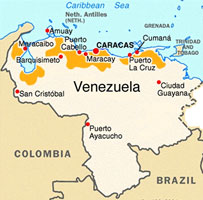 CHARACTERISTICS: uneven, but certain pockets are at or near the top of the crop

In the memories, Xoconochco cacáo in pre-Columbian Mesoamerica stands first, foremost & forever. But now that that’s virtually gone, Venezuela is the Mercedes of chocolate, hence the abbreviation ‘Venzy’ – sold as the world capital of premium cacáo production today.

But it too has felt the ravages of the tree’s shifting fortunes. What was up until the 19th century a red carpet of Criollo cacáo – of a special quality laid out all over the countryside (the valley of Ocumare was once 99% red-fruited Criollo trees) – has since changed. In 1831 crops from Trinidad of Amazon heritage were transplanted here. Yet even today hybrids of strong Criollo germplasm comprise a good portion of a genetic labyrinth so diverse & variegated with numerous, distinct regional cacáos planted in small areas, resulting in unique features each according to place, many with an assigned denomination. For instance, practically every short valley along what was once known as the ‘Pearl Coast’, from Chuao to Choroni & Cuyagua, has its own properties of reputation & legacy. (For more, see the Atlas section on Strains.)

Venezuela hosts a diverse geography within its borders: deserts sporting dunes in the Falcon area, large lakes like Maracaibo & Valencia,  the snowcapped Andes Mountains & the Amazon throughout.

The country sits well away from volcanoes & even hurricanes, which rarely reach here because they change course upon hitting the Caribbean islands offshore.

Colonists recognized this privileged landscape when they founded major cities situated along its coastal breezes with views of nearby mountains. This Central Coastal Range, a northeastern extension of the Andes known as the Maritime Andes, runs parallel to the Caribbean Sea for 870 km (540 miles) & varies in width from 10 to 80 km (6.2 to 50 miles) with elevations of 600 meters spiraling up to 2,675 meters (1, 970 to 8, 775 feet).

The mountains bifurcate & between their littoral & inland range, wrote George Earl Church, lies “the garden of Venezuela, the valley of Aragua, one of the most beautiful in South America”. Ideal for agriculture too, rich in topsoil & a tropical climate. The only downside for cacáo: less than optimum humidity & rainfall. Venezuelans get around this shortfall via irrigation.

No one knows for certain when & where Venezuela’s cacáo originally came from. Speculation focuses just to the southwest of Lake Maracaibo. Reports also point to Mesoamerica. The Spanish apparently transplanted trees once the native cacáo there started suffering the ravages of disease & overproduction that imperiled it (& partially accounts for Venezuela’s inclusion here in the Caribia family).

Between 1600 & 1620 the Province of Caracas (Venezuela) sold cocoa destined for the port of Veracruz, Mexico to indigenous costumers there, a sign of just how depleted the once grand cacáo groves of Mesoamerica had fallen. The trade for it was also lucrative across the Caribbean & kept Caracas as a lynchpin in the economy of the Viceroyalty of New Spain.

Any transplanted trees from Mesoamerica would’ve supplemented what was already growing in Venezuela – & evidently being cultivated too. Even a letter written in 1612 suggests that Venezuelan cacáo is older & reaches further back than just the product of Spanish colonialism. The register of royal decree in Seville, signed by Philip III to the governor of Santa Marta Province in what was then called the Viceroyalty of Nueva Granada, mentions “more than 100,000 very large trees of cacao” in Maracaibo, & insists these were planted & cultivated by natives prior to the Spanish arrival.

Three years later the Carmelite Vázquez de Espinosa chronicled cacáo among the “fertile valleys & meadows for a distance of over 40 leagues from Caracas… large orchard & plantations which bear harvests… in great abundance. They brought down these cacao trees from the sierras & ridges of the inland country, where there were great thickets & woods of wild cacáo…; they made up great bundles of these wilds trees, transported them & created plantations…; these tree are not so delicate to raise as those in New Spain [re: modern Mexico] & Honduras”.

Unlike Central America today, however, Venezuela has sustained a broad spectrum of varieties & strains, both good & bad & by no means uniformly excellent, including those Criollo hybrids with exception perhaps of the particular area SW of Lake Maracaibo / Rio Catatumbo toward the northern Andean foothills. A study of the sub-Andean area published in 1993 by Humberto Reyes et. al., describes these Criollo Andino as an original variety unaffected by the arrival of more recent cacáo plantings. To preserve & enhance its future, genetic research is conducted in situ right in the growing fields at Estacion Experimental Chama, Campo San Juan de Lagunillas, & Finca San Joaquin. Venezuela is also home to El Rey Chocolate Company, the 1st modern global firm to master the entire chain from production to processing & packaging of finished chocolate in-country rather than shipping raw material to Europe & North America for refining. It’s all done where it’s actually grown, fusing old-school tradition with new-school technology.

Recent political strife, however, threatens to take its toll on this venerable origin, pitting landowners against land-reformers – one side seeking social justice, the other trying to retain their status (a handful of large-holding families control a majority of the country’s crop) &, more importantly for chocolate, preserve the wisdom accumulated over centuries, passed down thru generations, of husbanding prized cacáo trees that gave rise to Venezuela’s renown that could potentially be reversed with just a few bad seasons.

No single bar could possibly represent the whole of Venzy’s diverse terra. In point of that fact, the bar selected below does just the opposite, & goes against the grain. Nonetheless it expresses one of the better aspirations of the country, if somewhat in retreat – integrity.