Comparatively less is known of this profile but given that cacáo contains 750+ chemical compounds that have yet to be fully investigated, more should be forthcoming. 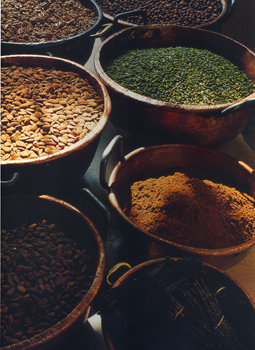 A plethora of these compounds could account for spice & herbal notes. Or even a single compound, depending on its stereochemistry – the branch of science that deals with spatial arrangements of atoms in molecules & their effects on the physical properties of substances. This can impart wildly diverse flavors, especially at the stereoisomer sublevel in which molecules have the same atoms bonded to each other but differ in the way these atoms are arranged in space. Riffing off the “stereo” metaphor, a music analogy sounds apt: a chord can be perceived differently depending on its inversion (such as whether the root or alternatively the dominant is in the 1st position) not to mention which chords come before & after. So, for example, the cacáo compound carvone with one stereoisomer produces a mint-like aroma while another stereoisomer of the same compound generates caraway tones. Cacáo with 750+ compounds can be infinitely manifold like this & one reason why it proves extremely difficult to reproduce artificial flavors that taste like chocolate.

Spices (such as classic pumpkin pie spices) & toasted coconut have been speculated to derive from under ripened pods containing seeds high in free fatty acids. Spice tones may also be an offshoot too of synergistic forces perceived as a chemical irritant (such as piperine), qualities that can be attributed in part to cacáo’s natural astringency – that puckering dryness caused by cacáo’s alkaloids, flavanols, & polyphenols triggered ironically by saliva to evaporate proteins out of it. Specifically,  a QTL (Quantitative Trait Locus) or cluster for astringency seems to be closely associated with proanthocyanidins genes flavonoid 3-hydroxylase (F3H) & dihydro-flavonol-4-reductase. Though generally classified under flavor, astringency is technically neither a taste nor a scent but a textural effect called trigeminal sensation which triggers a physical reaction on the tongue that some interpret in a spicy kind of way. It happens in chocolate whenever a range of phenolic compounds affect the trigeminal nerve – a nerve responsible for sensations of pain, temperature & touch in the mouth. Well-known examples include capsaicin creating chilies’ pepper heat, or citric acid for its tingling effect, menthol for cooling, & the fizzy feel of carbonated drinks.

Other sensations can be produced as well by different chemicals like spilanthol derived from the yellow flower buds of Sichuan Buttons. They generate an electrical tingle, followed by a rapid increase in saliva production. Erythritol, a sugar alcohol, produces a cooling effect much like menthol, while cubebol from West African peppercorns impart peppered allspice flavor along with some cooling properties.

It can all add up to a tactile symphony of Atomic Fireballs. Roasting & conching will fix it – if so desired.

Herbal effects, on the other hand, could also be a by-product of an ‘under-over’ phenomenon: under-fermentation (beans known as cacáo verde bear green notes – often astringent + bitter) or over-fermentation (though of a different sort, due to the enzymatic breakdown of peptides into constituent amino acids translating into perceived dandelion, asparagus, artichoke, etc.). Other factors include palm fronds &/or banana leaves often used to cover cacáo beans in fermentation; straw notes from jute sacks cocoa beans traditionally are transported in; the sugar added to chocolate (especially less refined cane sugar which belongs to the grass family [a strong reference compound being cis-3-hexenol], often with attendant molasses), & methoxypyrazines formed in Maillard Reactions during roasting can convey leafy green & grass characteristics.

An adjunct to this category is vegetative accents beyond green ones, such as potato, caused by the chemical compound 3-(methylthio)propionaldehyde during Strecker Degradation (an offshoot of Maillard Reactions). It contains the precursor to dimethyl trisulfide, characteristic of onion. 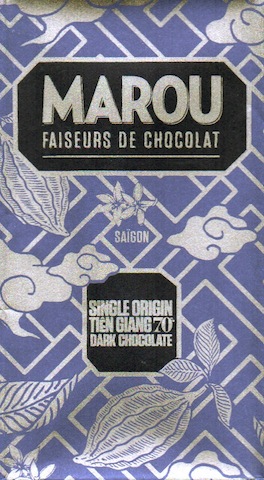