Chocolate: A Bittersweet Saga of Dark & Light, by Mort Rosenblum (2005) 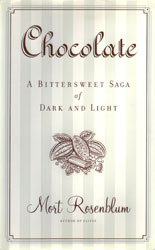 A behind-the-scenes investigative report on the state of chocolate around the world… at the turn of the millennium. Mort Rosenblum is a journalist, wordsmith, & transplanted food-hound living among the olive groves of Provence, with that post-WWII American itch for all things French (hence, his bias toward chocolate from there). He pals with the usual suspects in Paris & falls under the spell of alpha-tasters, whose every descriptor he jots down in shorthand (at least he hooked-up with some esteemed ones) before touring the globe in search of absolute chocolate perfection. From his own chronicles, he seems to have missed the Holy Grail, but along the way he gets a course in pueblo mole, complete with “so sacred is chocolate / you make it on your knees / mix it with palms together / & drink it looking at heaven”.

Back on his own two feet, he then surveys the ignominy that was the Ivory Chocolate Coast with super-wide-4-lane freeways leading either to former President Houphouët-Boigny’s village of Yamoussoukro or… nowhere. He also puts the hit on Godiva – marketing aura surrounding a box filled with nothing but candle wax. Jumps on Switzerland & Belgium for living off fumes of the past. Then back to France again, to the subsidiary of a $5 billion conglomerate – the stealth house of Valrhona, loaded with mystical cachet & cold-cocked offices deep within the corporate concrete sub-basement at Tain L’Hermitage (guess he was impressed, since it sits at the top of his list, or rather hers; the unacknowledged ghost writer is none other than Chloé Doutre-Roussel, & this, the book she should’ve written instead of that frivolous pink puff piece).

Bittersweet Saga would be housed in the Permanent Collection of this section’s bookshelf except for the fact that chocolate today follows Murray’s Law relating to computer chips – changes happen so fast it all becomes highly perishable. So get this before it’s outdated… like that Apple iPhone.