Unfortunate subtitle – The Slow Loss of Foods We Love — for Sethi ultimately surmounts the dire consequences of humanity’s dumpster-trashing of the planet with joy & passion mixed in with a fat dollop of melancholy too.

Quite the tour de taste. 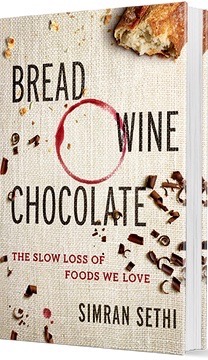 She went grocery shopping for newsbites & found them aplenty in the vinyards, the tropics, the bakeries & breweries. She did her homework & connected an exhaustive list of doers & specialists in their respective fields.

Over there she cuts bread & here she drinks steins of beer seemingly, like Schroedengen’s cat, all at once… each with their own microcosms & scientific treatises that provide more lenses thru which to see the world than Parker Warby. Just when she appears to have run her course, this landlubber dives the oceans deep to scare up more horror stories, wherein depression sets in darker than the bottom of the Aleutian trench.

The macro-data & trends discourage, leaving consolation in small victories. ‘Eat your vegetables’ & savor them with the relish of a last supper on death row. Then ponder the current PC terms-of-art: climate change, food insecurity, threatened biodiversity, unsustainablity… Altogether an alarmist tract within an emotional distress call for sparing Earth’s resources. It’s not uplifting but it is enlightening.

Let’s step back for a bit of perspective… If humanity fails to kill itself first, & until the aliens show up or Robo sapiens trump them in the race to drive humans back into the managerie pile, we’re the masterpiece of creation & masters of this dominion. As breeders & consumers, waste adds up to the natural byproduct of GDP. Just who we are as a species in the current fold of evolution.

Whether thru art, politics, food, meditation, drugs & romance, humans are also strivers & pleasure-seekers for a blood ‘n brain buzz. This book serves up that we’re sensuous creatures in a cross between sacred & science. Scriptures remind man does not live by bread alone (or wine or chocolate for that matter). Echoed from Pierre Teilhard de Chardin to Ms. Ida Craddock & Sting among others that we are not human beings having a spiritual experience; we are spirits having a human experience in the material world.

Simran herself embodies a surreal global construct – perhaps with IoT (the Internet of Things) aren’t we all. Her heritage from India. Her education Western & beyond. She lives & visits multiple places.. gliding in & out of airports… Simran travels thru countries to indulge at the best & humblest tables (sometimes one & the same) with aplomb & enthusiasm of a diplomat’s daughter. She eats kale for its virtuosity; pineez to reconnect with her cultural roots. Her ability to cut into the heart of the matter, digest the tissue of the issue(s), utilizing food as the fuel for this vehicle, is transnational. This makes her a world citizen. And since most in developed economies take 3 meals/day, it makes her an everyperson.

One chef-friend in her book proclaims,: ‘We are what we eat & we eat what we are’. Well, in the same molecular vein of ‘who’s in the stars? We are!’, s’pose it’s loosely true. And while conditioning plays a role, a signpost of adulthood involves choice, at least to some degree.

Sethi confesses amidst heartache how chocolate above the larder of gastro-heroes filled the void & spared her during divorce & other hardships, “there is no ‘we’ in chocolate; this steady companion is mine alone”. Free will or involuntary? Whichever, priv-lit & luxe-goods as therapy. Shades of Caroline Hanson (If she was going to die, she wanted to go out with chocolate in one hand and a shopping bag in the other).

It harkens Colin Gasko of Rogue Chocolate uttering deep doubts about specialty markets saving cacáo & chocolate generally, for they’re too niche. A part of that resides in its limited socialization, or what Dr. Marcy Norton wrote on the commensality of chocolate. It hardly exists anymore. Instead people largely horde it in private. Coffee roaster Aaron Wood of 7 Seeds on his ‘devil’s cup’: “It’s social. You wouldn’t go out for a bar of chocolate, would you?” To which Simran impishly / coveteously offers: “Thank God, I thought, because I really hate sharing chocolate”.

Maybe sums up the problem in a nib.

Besides a glib line, in a momentary lapse of generosity, this misses Anne Frank’s SOS to the world: no one ever became poor by giving.

Bread Wine Chocolate ends pretty hopelessly despite brave attempts to bear up, to turn the broken heart into an object lesson learned, that, hey, living would feel incomplete & unexamined without piercing anguish. Afterall, innocence like ignorance is bliss for a reason, no? Huh. If given the choice, who’d choose otherwise. C’mon now, be honest. Would you rather play as a child or think like an adult?

All’s far from lost though, amidst the gloom. Within the inner folds Simran hatches the kernel of a vital concept: in vivo. A manner of saying ‘yes’ to life.

Pro-life in the richest sense.