Chocolate as Medicine: A Quest Over the Centuries, by Philip Wilson & Jeffrey Hurst (2012) 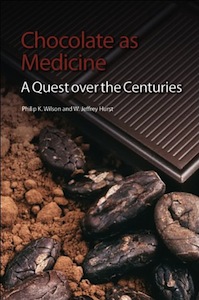 Welcome to the end of an anomalous period in which some distortion in the time-space continuum appears to have turned things inside out, upside down, & backwards.

For example, in the last couple decades many grew up & lived in a strange reality during which chocolate was viewed negatively. For a good part of their lives, adults especially have had this peculiar notion that chocolate was ‘bad for you’, & either avoided eating it or felt guilty when they did.

Back when Jacob Schor considered himself a food scientist rather than a naturopathic physician, he put considerable time & effort into creating carob-based confections that could substitute for chocolate because they were thought healthier. How bizarre looking back 30 years, he admits, at his carob vs. chocolate taste panels. None of the taste panelists ever preferred carob over chocolate. Replacing even 5% of a carob coating with chocolate improved the flavor. While pretty much every person he tested preferred chocolate, no one questioned the underlying premise that chocolate needed to be replaced.

Trace the history of chocolate back thousands of years, it has been viewed with only rare exceptions in a supremely positive light. It was the “food of the gods”, a substance that connected people with the divine elements of creation. It served as medicine. Plus a profoundly nutritive food that alone could sustain a person for lengthy periods.

How it came to be that in the short period of our lifetimes chocolate became a junk food is not worth wasting the time to dwell on in the face of mounting data to the contrary. Suffice to say, public opinion can be fickle &, as with climate change, there will always be naysayers.

Luckily the world of science has awoken from this peculiar distortion. Chocolate is once again being appreciated as a near magic superfood; this time based on randomized controlled studies & not just mythologies & anecdotal reports. Simply put, it’s good for your health. And with every Valentine’s Day, note that chocolate is also be good for your love life.

In Praise of Chocolate

Chewing on these thoughts while reading Chocolate as Medicine: A Quest Over the Centuries, by Philip Wilson & Jeffrey Hurst will provoke a run to the cupboard, the drawer, the vault or wherever one safeguards the local chocolate stash. Both are PhD’s; Wilson an historian of science & medicine, a professor at Penn State College of Medicine; Hurst an analytic chemist & a principal scientist at Hershey’s. Between them, they know an awful lot about chocolate, history, & medicine. Perhaps too much.

For anyone who enjoys nibbling on morsels or tidbits of info, this book supplies a chock full of ‘em. With full access to Hershey’s archives & libraries, just imagine the sort of details they can bring to the table. Given their learned backgrounds, the preconceptions & myths surrounding both recent & historical reports melt away as this duo proceed with scientific-based investigations & rigorous scholarship about chocolate.

The authors divide the book into 4 sections corresponding to the major epochs in chocolate history:

Back to the Beginning

Chocolate was prepared as a drink with water in Mesoamerica (probably cold or tepid). It signified social status, cosmological import, & medicinal powers within a shamanic context.

It arrived in Europe in the 1500s. This is where Wilson, as the medical historian, takes the lead in explaining the medical framework of the time & how chocolate was integrated into the existing Old World medical theories that date back to the Hippocrates. For European doctors, constitutional make-ups & derangements of the 4 bodily humors linked to the 4 elements of the universe formed the basis of all understandings of disease & prescribed treatments. These elucidations parallel those in an earlier work by Marcy Norton, as well as others, presented here with that added authority of this physician’s own internal medicine.

The Elixir of Love

Writers for centuries alluded to an aphrodisiac effect created by chocolate. Joannes Rauch spoke of chocolate as a ‘violent inflamer of passions.’ Richard Cadbury is credited with putting chocolate into heart-shaped boxes for Valentine’s Day in 1861. Chocolate’s association with the heart goes back to Mesoamerican cultures. The Mexîcà/Aztec words for heart & blood were synonymous with their term for chocolate. The pods of the cacáo tree were drawn as heart-shaped in early illustrations.

The early 1700s saw chocolate as a primary medicine in the treatment of smallpox. Philadelphia Dr. Benjamin Rush, MD, prescribed it with biscuits to prepare patients for their smallpox inoculations & as a major constituent in the diet for all patients during recovery.

Seeing a potential business opportunity, James Baker, a Harvard trained minister & physician, hired John Hannon, an Irish chocolate maker, to produce chocolate. In 1764, on the Neponset River outside of Boston, they started grinding cocoa nuts or beans using a water-powered gristmill. Thus the John Hannon Chocolate Company, arguably the most successful chocolate brand in colonial America, came into being, producing what we would now call a medicinal food. They sold hard bricks of ground, molded chocolate that were then melted in boiling water & prescribed for various ailments. Hannon was lost at sea in 1779 on his way to the West Indies to buy cacáo, so Baker took over the company the following year & renamed it Bakers Chocolate. The same Bakers Chocolate still making brownies today.

Considering the recent studies on chocolate & cardiovascular disease, & the historic linkage of chocolate with the heart, it gives pause to reconsider our modern dependence on randomized controlled trials to wonder how much medical knowledge we lose when we ignore medical insights from earlier cultures.

With so many factoids & minutia in all the detail, the larger story tends to get lost.

And where is the cutting edge of chocolate meds? The recent breakthroughs of high-polyphenol chocolates by Mars, Callebaut, & Nestlé? The materials being tested in human clinical trials over the last few years. Do these specialized, medical-grade chocolates differ from the expensive chocolates sold in the health food stores? Are they even better than Bakers Chocolate? Or is this just part of the same old pattern in which manufacturers slap a claim on a product with little hard evidence to back it up?

A new era has risen in the medical utilization of chocolate. Hurst & Wilson shed light on past beliefs & provide if only clues toward future applications.