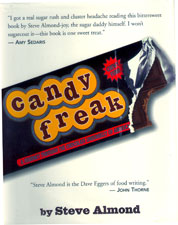 Good title. Good chapter headings too: Night of the Living Freak; Last Man in America with Black Jack Gum; In the Belly of the Freak; Southbound with the Hammers Down – Southern-Fried Freak; Marshmallow Parallax; Boise: Gateway to… Boise; The Past is Just Ahead

Steve Almond is THE Candy Freak. They are one & the same… inseparable. Seriously hard-wired, natural as autogenesis, even the surname is apt. Lest you think he’s some kid touring the country for nostalgic mom & pop candy factories – well, he is. But Steve also doubles as a professor at Boston College. His uncle, the renowned political-scientist, Gabriel Almond (formerly U of Chicago & Stanford). In other words, he’s got chops & pedigree.

Freak hegemony works like this: we don’t choose our freaks, they choose us. Almond propounds chocolate, & more generally candy, as a developmental psychology tool more determinative than anything thought up by Piaget. When Mom & Dad have left the nest & gone out to earn a living, “sweet” is the only lasting emotional bond. The messy, delineated stages are:

Early Childhood ICS (Initial Candy Supplier) – the very sun in the psychic galaxy of a child
Industrious Middle Childhood – shoplifting from said ICS & building up a rap sheet
Pre-Adolescent Awareness – your buddy ends up behind the counter in a candy store, the stupefying equivalent of a friend being anointed pope
Teenage Sugarlust – hoarding & hyperglycemic metabolism
Revolutionary Period – candy by the pound
Grad Sch MBA 101 – Freak Xmas = Halloween, encouraging kids to take candy from strangers; iffy-looking houses & razors cut into candy apples add the allure of risk; special emphasis on the final witching hour when crowds thin out & benefactors, overstocked with surplus, create the perfect storm for enormous ROI
Grown Freakonomics – hellbent on successs; candy the Dow Jones of Kid Economy spawning day traders in vivo, with its own milestones: the Bubble Yum Burst of ’75; the seismic boom of Pop Rocks that spurred black market activity; the Gummy Bear market
Adult Wanderlust – with knowledge comes the urge for worldly experience, traveling candyscape for radical-object reconnect; pilgrimages to Necco, Tootsie Roll, Goo Goo Cluster, Valomilk, Idaho Spud (no, not that, Potato-head), Twin Bing, Big Hunk… (the result, naturally, a chronicle of said world tour written up in a book with a title like, say, Candy Freak)
Stinking Wisdom – that hooked fancies of the idle rich stoked the engines of history, discovery, & misery (e.g., Middle Passage) to bring the sugar & spice home, all a luxury paid-for in blood but cheap enough to seem democratic; & the consequent onset of adult grief over smaller sufferings – a failed life, wasted romance, creative mediocrity… & bankrupt to boot
Maturity – those who quit chocolate are duds in bed, even when re-erected with Viagra
Reinvention – youth regained with revolutionary zeal via a Re-Declaration of Independence from, & an eschewology of, Walmart, Kmart, Targetmart & Whatevermart
Ends where it all began, Mr. Freud, inexorably re-tracing childhood, similar to those Hare Krishna pictorials of a baby on all 4s, then man becomes bi-pedal, only to shrink back, first with a cane, then a wheelchair: zietschaungundermoutton – world in a mouth, forming a perfect feedback loop of id <-> freak <-> memory where nothing rivals the primal resident senses of taste & smell in our association banks (except maybe music)… so strong, the result is a regressive joy called “craving”.

Steve Almond embodies the undying spirit of America. He’s all engine, basically a ‘Vette without the fiberglass body. The underdog fighting corporate voraciousness & brand domination with everlasting virtues of imagination, innovation, & individuation, even as he realizes the Darwinian inevitability: the strong survive, the weak struggle, people seek pleasure to endure pain. Incisive – God bless him.