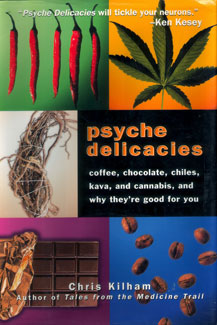 OK, the alliterative subtitle may be tripp-indued, but this book brings the facts & laughs. Chris Kilham is a medicine hunter, trekking the wilds in search of potions to return to civilization like a latter-day seeker for the elusive fountain of youth. Either that or he has some extremely rare disease for which Western Medicine has no answer. He logs miles in some of the most remote, impenetrable places on earth & deserves a spot alongside that other intrepid traveler, Robert Pelton, author of World’s Most Dangerous Places & Come Back Alive. In this line of work, a tough gut goes with the territory. And Kilham has the iron stomach. Naturally he loves peppers. No, not the everyday supermarket sweet bell pepper variety. Or even the typical gringo nightmare – cayenne. But the Scoville-burning hellfire kind – like the dreaded red savina, or the naga jolokia. He throws down Mexico chilis, India vindaloo, & even mace canisters from local police officers. Forget about subduing him with tear gas: he doesn’t give a wince let alone a teardrop. (See his macho mano y mano smackdown on Pgs. 88-90)

Whether he can pass a medical residency or receive an honorary doctorate is an open question but he’s a one-man WMD (World Magic Doctor). According to his personal clinical study, cacáo’s efficacy is higher than the best cure ever, i.e., the placebo effect (credited, as reported in the NYTimes, with being just as effective as pharmaceutical drugs). But Chris, please STFU: word gets out, the DEA classifies it a Schedule 1 controlled substance, putting a ban on America’s best street-legal high… then the next thing we know, it’ll require a doctor’s prescription.

Beyond ingesting plants for physiological / psychological benefits, Kilham has a grander gaia-like hypothesis; that humans operate under the spell of these higher plants, guaranteeing their propagation & global distribution in a brilliant evolutionary Darwinian scheme, as if they’re having us rather than the other way around. In short, plants are resourcefully-minded &, due to their psychoactive properties, we are their porters & protectors (or, some might say, slaves). These 5 substances listed in the title occupy a special place in nature’s apothecary because they inspire reverie, are healthful, & can be used daily without side effects. The metaphysics here may be debatable, but the chemistry of these plants & their universal presence are indisputable. Coffee, for instance, is more widely consumed than wheat, corn, or rice & the 2nd most traded commodity, after oil, on world markets.

Though Kilham possesses that hyperactive cannabis protein-receptor in his head, it’s chocolate that owns his taste buds. The chapter on cacáo contains very little original info; more a recapitulation of well-known research than anything else. But at just 35 pages it’s an excellent short primer for anyone who wants to cut right to the cliff notes. Perhaps the ultimate synopsis: “Melts in your Mind, Not in Your Hands… chocolate is a Trojan horse, carrying into the body hundreds of natural compounds, some ordinary & some exotic, which work busily to modify mood in subtle yet undeniable ways.”

No one needs an encyclopedia, Ph.D., or prescription to test that.