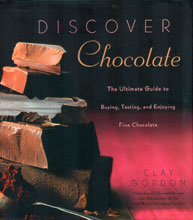 Clay Gordon knows some about chocolate. For years he promoted himself as North America’s 1st chocolate critic & created the Chocophile website. Once he sat on a panel that exhibited the diversity of the new chocolate scene: a pastry chef here (whose best friends are butter & flour so he wouldn’t know good chocolate if it bit him hard on the tongue), a foodie writer there (to whom everything chocolate is “yum-o”), to a Clay Gordon who takes a more serious tack.

Credentials aside, Gordon begins his book, Discover Chocolate, with… oh, no… another ‘tarding up of the American consumer: “now here’s how you eat chocolate: first, look at it by opening your eyes; second, smell it by breathing in thru your nose; third, listen to it by perking up your ears; next, bite it…” ad nauseam. Americans need nanny-style potty training like the Pentagon needs another war. Chocolate is a direct hit – it’s easy to ‘get it’.

The book ends with the ubiquitously overwrought comparisons to wine & misguided pairings with it. What self-respecting chocophile would waste their bar on a bottle? Maybe cognac or single-malt – but the simple stuff of grapes? The subtitle, “The Ultimate Guide to Buying, Tasting & Enjoying Fine Chocolate”, suggests Gordon operates under the influence/effluence of bacchanalian de rigeur. ‘Fine-Wine’ talk permeates & shows him off as a gourmand first & foremost more than a chocolate profiler.

The wine section, patterned along the lines of “how to taste chocolate”, fronts as a feast of folly that turns into a crazed dental lab – first swill, then swish (where’s the spit?). It comes off as a PR play, something that looks good in a Table of Contents, where an agent can more easily pitch it to the publisher, who can then turn it around & spray it on an unwary public. Caveat emptor / let the buyer beware: pairing chocolate with wine is tricky business & sommelier Hervé Bizeul’s advice in The Book of Chocolate should be heeded, namely, to avoid doing so for the most part. One should add, unless stricken with hubris or a strange neural deficit that wipes out most of one’s sense of taste.

But before announcing “Attention Booksellers Everywhere: heed Shakespeare (were I like thee, I’d throw away myself) & discover the nearest trash bin to dump this into it”, there’s good reason for sparing this profusion of shamelessness. Well-sequenced rock or hip-hop albums usually start & finish with their best tracks – hook the listener from the beginning & leave ‘em happy at the end. In between often amounts to mere filler. Gordon does just the opposite. Sandwiched between the fluffy buns of tasting & pairing lies the buried meat of the matter. Perhaps wisely so, since it’s a bit technical.

More than a chocophile, Gordon positions himself as a cocoa-wonk. He walks readers thru every step of the entire processing chain well beyond the flow charts that appear in most chocolate books & websites, explaining how each sequence works, factoring helpfully for us that even minute differences can cause major shifts in the final outcome. He stands behind only Samantha Madell of TAVA Chocolate & Maricel Presilla in this role of public educator.

Unfortunately, for the unsuspecting reader Discover Chocolate is teeming with technical errors – the probable consequence of being self-taught in matters of chocolate. For example, it commits the classic mistake that “there are many species of cacao”. Cacáo represents one of 22 species (Bicolor & Grandiflorum the other relatively well-known members) belonging to the genus Theobroma. Therefore, only one species of cacao has been classified: Theobroma cacao. Perhaps it’s the confusion that cacáo maybe possesses innumerable subspecies.

The belief that cacáo is “the only known tree that is self-regulating” defies principles of botany & insults every other tree in the forest. As one agricultural scientist puts it: which tree isn’t self-regulating? A tree that brings to maturity fruit that it doesn’t have the resources to grow? Trees abort flowers &/or fruit whenever stressed, & grow more abundant crops in wet years than in drought years. Fertilizer & irrigation industries wouldn’t exist except for plants generally responding positively to increased resources or negatively to reduced ones.

Among just a few other curious statements – a) beans must be removed from their pods within a few days (not necessarily; a 2006 study conducted by Meyer & Biehl in Malaysia noted great reduction in pulp volume for pods that were stored or aged awhile before removing their seeds, causing less acidulation during fermentation while beneficially maintaining pulp sugars; furthermore, Nazaruddin et. al., in the same year showed pod storage of 2 weeks “preconditioned” fermentation, producing lower polyphenols [particularly epicatechin & catechin] in addition to lower acidity, arguably leading to less bitter / less astringent chocolate); b) adding heat to beans slows down the drying process (mechanical fire-drying usually reduces drying times); c) cocoa caramelizes during roasting (‘caramelization’ is sugar browning absent the presence of any amino acids, & different from the browning of amino acids in Maillard Reactions which occur during cocoa roasting); d) roll refiners get “smaller & smaller… the smaller rollers therefore turn faster” (rollers typically do not get smaller); e) conching evaporates “any remaining” volatile aromatic compounds (depends on the bean variety & the duration of conching; without any volatiles whatsoever, a bar would lack high-fruit notes yet plenty of bars contain them); f) Gordon favors the introduction into Ecuador of the clone CCN-51 – a defensible position – while claiming that any undeserved reputation is due to their being routinely over-fermented (this runs counter to recent history; most beans from Ecuador taste under-fermented).

Problems notwithstanding, Gordon is knowledgeable enough in aspects of chocolate making to have his own bar on the market. It’s easy to imagine him with retro-roasters, winnowers, grinders, & conching machines set up in his neatly-trimmed Panglossian backyard, the neighborhood kids checking him out as some future-rustic mad-scientist at work on the next great project – home-brewed chocolate, like all the basement vintners in the 80s & 90s. Hell, if he can convince his nearby Botanical Gardens to build a vast tropical greenhouse ala the Butterfly Conservatory at the NYC Natural History Museum, he can then grow the stuff too (Neil deGrasse Tyson might even sponsor such an effort). Produced, processed & packaged in Clay’s Cocoa Confederacy.

Placed in a larger perspective, Gordon does a lot a good work, this book being but one contribution to several other endeavors such as The Chocolate Life – a social networking site bringing together some seriously high-minded professionals along with everyday enthusiasts.

Galileo said all truths are easy to understand once they are discovered; the point is to discover them. In North America, Clay Gordon more than most has blazed a trail.

This one’s retrieved from the bonfire