On the Chocolate Trail, by Deborah Prinz (2012) 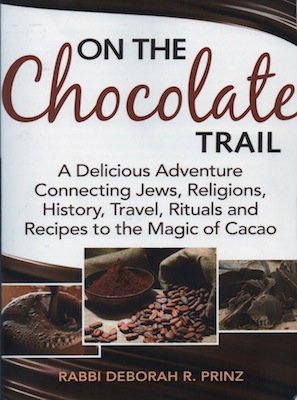 Everyone knows folks insanely devoted to chocolate (ahem) but who knew Jews are meshuga (crazy) for it? Leave it to a yente Rabbi to get all farklempt over it. Rabbi Debbie Prinz.

The working title of her book – Jews on the Chocolate Trail – might God-smack of some Elders of Zion cocoa conspiracy to those distorted minds who only read headlines. So the good Rabbi dropped the flock & shortened it, which appeals to a wider audience anyways.

Like other famed religious trails… from Saul on the road to Damascus & Ignatius walking the Iberian penisula… Prinz wends her way thru the world of historical & contemporary chocolate in search of the world’s best. She ultimately finds it, based not so much on taste but on ethics.

Before then On the Chocolate Trail divides into the proverbial fork in the road. The second half covers well-trod material that anyone familiar with chocolate history will recognize. It fuses the research of popular titles such as the Coes’ True History with lesser-known works introduced years ago to readers of this site; from Chocolate in Mesoamerica by Cameron McNeil’s to Sacred Gifts, Profane Pleasures by Marcy Norton. Here Rabbi Prinz brings her considerable insight & understanding of theology & social relations to beautifully blend, in a syncretistic mix, the way of the ancients that resonates with modern readers. Example:

the West’s “biblical narrative focuses on the singular apple as the symbol of sin & exile; this differs greatly from the pre-Columbian elemental first food, cacao. Grown on a sacred tree, cacao was coveted among the supernatural beings & was the very substance of humanity. Before European views & mores infiltrated the area, the Mayans learned cacao stories from their Popol Vuh, “The Book of Counsel.” It taught that cacao ensured a balance among the earth, sky, & underworlds. In these legends the gods created humans from cacao & maize. From them, the cacao tree was a “world tree”, the first tree, the center of the universe, & the primordial source of life.” 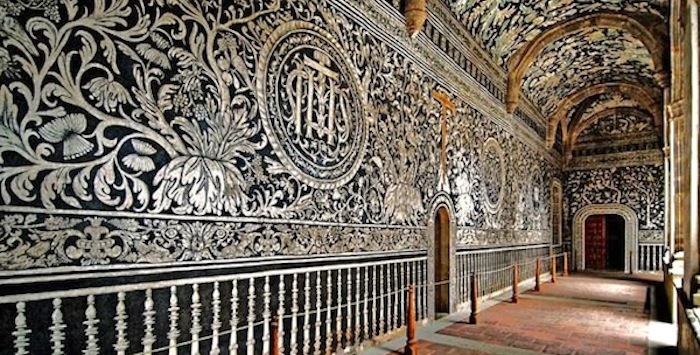 It is the first half of On the Chocolate Trail, however, where Prinz truly shines in her element, roaming kindred territory… where most readers will find the heretofore untold story of Jewish chocolate, some of which reads like a primer in Hebrew & Yiddish. (On Page 85 alone, the Rabbi treats us to mezuzah-kissing, Talmud studying, shul-going… sabra al Hashulchan [the latter translates into ‘cactus on the table’… hmmm, a possible descriptor for a future bar review from Mexico?]).

That trailhead (or shall we say shvil) begins in earnest where the secret of chocolate-making first came to France, brought by Sephardic Jews driven from Spain & Portugal during the Inquisition. Specifically, the Saint-Esprit quarter of Bayonne. For centuries, it provided one of the area’s main raisons d’être; only ship-building & the port delivered more prosperity.

During the ensuing decades, cryto-Jews, feeling the social pressures to hide their faith while still being faithful, would ritualize chocolate, using it to welcome the Sabbath when wine proved scarce, or even as a shibboleth: To offer chocolate at times when it was proscribed and to receive a refusal in response was to communicate through a coded language (Page 31).

Onward to the New World where wandering Jews included the matriarch of the Gomez chocolate family, Rebecca – the only known woman in Colonial America to manufacture chocolate. If true, that puts her in an elite Euro class for all the Americas (along with shikse Maria Gertrudis de la Zerda aka Maria la Chocolatera, thought to be the first lesbian barsmith, who operated a chocolate studio on Calle del Leon near San Lorenzo Street in Mexico City). 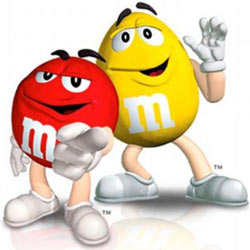 On another circuitous route Prinz mentions a historical footnote that the Elite Chocolate Company makes an Iraeli-style M&M called adashim (meaning ‘lentils’). Probably not lost on the Rabbi is that Mar’s modeled their M&Ms candies on chocolate pellets encased in a hard shell that was popular with soldiers during the Spanish Civil War. They referred to them as ‘chocolate lentils’.

And if that isn’t coming full circle enough, a centerpiece of this maven’s work lies in Chapter 4 – “Chanukah & Christmas Chocolate Melt into Gelt”. That’s not guilt but gelt, the Yiddish term for ‘money’ (well, if money is the root of all evil, maybe they’re inextricably linked).

Clearly enthralled, the Rabbi lectures on the meaning of Chanukah (celebrating the victory of the Jewish Maccabee army in 165BCE Judea over the Hellenistic Seleucids which rededicated The Temple [yeah, that one] in Jerusalem); its connection to money (Chanukah gelt recalls the spoils, including coins, the Maccabees doled out to faithful Jews); & the legacy inherited by their successors – the Hasmoneans – that permitted them to mint coins, a soveriegn right of political independence & religious freedom.

Combine that with ancient pre-Columbian Mesoamerica where money literally grew on trees when cacáo beans circulated as a form of currency in the Mayan & Mexícâ (Aztec) economies.

To top it off, Christians every December mark the feast of St. Nicholas, whom, tradition holds, stood as a pre-cursor to Santa Claus, with gold-covered chocolate coins because of the legend that he once tossed bags of gold coins around to spare women from prostitution.

Christmas started as a birthday celebration but the irony of the rebel Jesus booting moneychangers out of that temple is — whatever one calls it nowadays, the Holidays, Festivus, Kwanzaa, Winter Solstice — it’s all money now. Every other day amounts to pocket change.

So in addition to the “curious blend of chocolate informed by Quaker religious utopianism, industrial paternalism, & clever tourism” to describe the rise of the 19th century candy giants (Cadbury, Rowntree, Fry & later Hershey’s), let’s include a heaping dose of social-capitalism too, pseudo-Karl Marx style.

It all fuses together. Just as Columbus, the 1st Euro to spot cacáo in the New World long after initially sailing for it the same year the Spanish Inquisition kicked into gear. And Bernardin de Sahagun & Diego de Durán, early chroniclers of the Spanish conquest there. Putting 2+2 together, they all “may have had Jewish ancestry”.

In a sense, one way or another, everybody’s a Jew.

Might this explain a curious ommision in this book of Islam, Hinduism & other faiths particularly of the East? Or perhaps a sequel?

Then again, those cultures only take chocolate in small doses compared to Westerners to suspect that chocolate might be a Muslim plot. For the very success of Jews, not to mention Christians, affording them to luxuriate in chocolate self-indulgence might be their undoing. Those are some mighty conditional ‘mights’ until considering that chocolate, after all, never went anywhere near Solomon’s Temple.

This news should further unnerve Amb. Stuart Eizenstat, author of the the anxiety-ridden The Future of the Jews; ditto the more alarming The Vanishing Jew by Allen Dershowitz; their separate accounts of the demographic time-bomb, low birth-rates, assimilation, & inter-marriage threatening the congregation. And now this — the seduction of chocolate.

Facetiousness aside, any slander or defamation is unintentional for lest anyone think Rabbi Prinz a dissembler, she imbues her work & words with the spirit of Chofetz Chaim as guided by Psalms 34:12–15: Guard your tongue from evil, & your lips from speaking deceit.

With those timeless words as a guide, let’s tread gingerly over the troubles encountered on the trail — none of biblical proportions really – that cause in any event some kvetching:

While the above may strike as debatable, what follows are more egregious:

Excusing that, all’s forgiven because On the Trail expresses a profond message within its well-written pages propelled by action-packed verbs. It is that chocolate enraptures & captivates agnostics, atheists, & believers alike. It connects them & elevates them in nourishing the spirit. That is its higher power. Because of it, there’s cause for hope.

So to the throngs who think the world’s going to hell in a handbasket, let them come to chocolate.

Rabbi Deborah Prinz will embrace them. They’ll spot her easily. She’s the one who walks tall on the trail, above the many in this short field who fail to see what she so ably grasps, viz., that chocolate serves up the original & ultimate ‘soul food’. 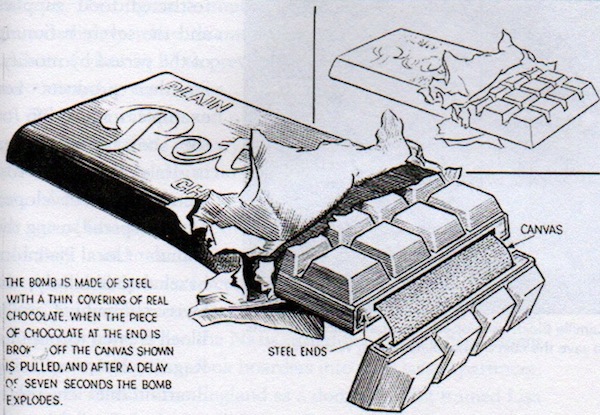 Not All’s Holy in Love in Chocolate: a devious booby-trap devised by the Nazis