Just as lines of great poetics break the sentence & suspend meaning, the Mayan world in which reified becomes deified & vice-versa makes for perfect logic, indeed feels most like reality, in the setting of a novel or the visual arts where perception enters the imaginarium to open up possibilities.

In this respect, Birgitte Rasine’s The Jaguar & the Cacao Tree (TJ&TCT) delivers just as much if not more essence of that culture than, say, exhaustive Mayan studies or the plethora of ‘chocolate bibles’ touted by authors as the definitive resource.

But academia, considered legit, gets taken more seriously, while freer creatives usually get dismissed or curated as ‘outsider art’ so scholars can arbitrate it. Fine. Coltrane’s “Love Supreme” wasn’t bopped in a classroom but in a basement on Long Island. Still, dissertations are written about it, PhDs awarded, & tenure tracks greased for lifetime salaries. 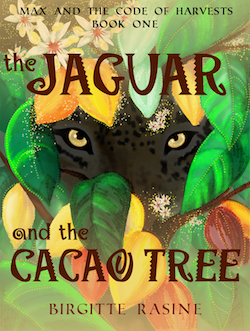 The Jaguar and the Cacao Tree by Brigitte Rasine

For instance, in Mayan numerology 13 turns out to be lucky, endowed with deep spiritual & temporal powers. Or an encanto / magick act in which there are more seeds inside a single pod hanging off the lone sacred cacáo tree than there are in the entire country.

Sure, certain scenes get carried away, farfetched in fact. They ridicule the intelligence of her audience – kids & pre-teens — with, to illustrate but one episode, all the chocolate equipment in the world being stolen in a heist on the same night (just interpret it as bittersweet hacktivism). Then the ultimate scene (sorry, no spoiler here) stretches the fantastical into the far-out obtuse… Rasine clearly a fabulist.

Somewhat less preposterous, she embeds a Titanic-style romance between an American boy (the extranjero or foreigner in this saga) & a Mayan girl. Ahhhh. The latter born under the sign of 13 Jaguar (a powerful day in the local Tzolk’in calander) linked to the son of the historical Lord Cacao / Jasaw Chan K’awiil I, the king of Tik’al, thought to have planted the sacred cacáo tree after losing his young son, devoured by a jaguar, due to the ruler’s greed. That humble offering of planting a tree entwined the souls of 13 Jaguar & the child, now taken root together within the sacred cacáo tree itself – The World Tree. Because a soul is immortal, the tree never stops growing versus the typical 30-year lifespan for cacáo. Forever young, this one still fruits a millennium later.

At times TJ&TCT feels best suited for those who still believe in Santa, the Easter Bunny, the Tooth Fairy, Oz… which includes the grownup kid in everyone, basically the most interesting people in the world.

The nib of the entire drama might be contained in a line pertaining to Western academics — so accomplished, so rational, so scientific — studying the area who, as outsiders, are not even aware let alone invited to a ritual ceremony conducted by the village elders one night under the sacred cacáo tree: “If they only knew what real “research” they were missing… Followed by “little did she know how much she in fact did not.”

Of course the kids are in on the secrets. Akin to digital devices, most adults have no idea.

Irregardless of the veracity within Rasine’s account (hey, science changes its conclusions periodically to engender disputes), the validity should not be discounted.

Short of time-traveling to Mesoamerica & marrying into the culture, TJ&TCT pretty much guides one to think, if not quite live, like a Mayan, perhaps in an idealized way, invoking mostly the kinder spirits in a similar fashion to Disney transmitting the better angels of Americana. It gives a strong verbal-map of how the early colonials – whose presumed descendants crawled across the Bearing Straits or floated alongside ice sheets – dealt with this New World wilderness. About as close as most gringos will ever approach the inner sanctum / workings of, stated respectfully, ‘The Other’, now that ‘The Other’ prides itself to call itself ‘The Other’ (or at least inculcated by universities to do so).

Added bonus lesson: the foreign language courses. Pocked with a fair amount of the Spanish of the conquistadores, as well as equally adept with the native Itzà dialect (for a flavor, try pronouncing & swallowing Nojo’och tukaanil / Great creator of the universe).

Plus add-in some profound lessons. For example, Humans waste energy in talk, muttered Fuego, one of the hummingbirds who thought-lines with the children.

So with that, let’s end this quickly, by saying that after reading almost every book or blog on the subject – from cookbooks & histories to the child slave labor trade & ‘oo-la-la, OMG I-can’t-believe-I just-went-around-the-world-&-ate-chocolate-in-every-country… Facebook me, instagram it, & snapchat, please’ — TJ&TCT is a contender for the best title in the last 5 years. One of the few books on the subject that approximates a page-turner &, though fiction / fantasy, actually pretty factual too!

To the grandmother in the acknowledgements section who laments she’ll miss all the characters in the book now that the story is finished, no worries: in a sense the tale never ends… she’ll remember them fondly with a lump in her throat every time she bites… into chocolate.