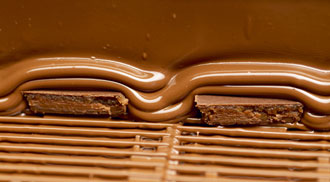 While many are beating off the dying dog days of summer rummaging thru foodie mags, running to foodie shows, & ruffling around foodie networks, fearless cacáo is fully entering the 4th (& arguably final) Phase of Chocolate History in the West… by attending the American Chemical Society (ACS) conference.

No worries, chocofiends, your flavorite has not turned into any inorganic biohazard. It remains safe & harmless as riding out Blurricane Irene on Manhattan’s Lower East Side — designated ‘Zone P’ along the emergency evacuation route for ‘Party’.

Back to the ACS conference: for any who doubt that the descriptors found in the C-spot’s™ review of Adi’s Soso-O are as farfetched as the islands of Fiji themselves, it turns out that the aroma of roasted cocoa beans — a key ingredient for chocolate — emanates from substances that can individually smell like potato chips, roast beef, raw beef fat, cooked cabbage, human sweat, dirt… (hold on, things improve)… cucumber, peaches, honey & an improbable array of other distinctly un-chocolate-like associations.

That’s among the discoveries emerging from research to identify the aromatic compounds in the world’s favorite flavor to be unveiled today in Denver at the 242nd National Meeting & Exposition of the ACS. The research — which charts flavor substances & their interactions from processing of cocoa beans to the chocolate melt on the tip of the tongue — could lead to a new class of designer chocolates with never-before-experienced sensations, this according to Prof. Peter Schieberle, chairman at the Institute for Food Chemistry at the Technical University of Munich.

Consider it Dos Rios on steroids.

Chocolate craft has developed over the centuries by intuition & trial ‘n error rather than any scientific analysis, so the substances that give chocolate its spectrum of flavors have been largely unknown. Over the past 20 years, Schieberle & his team have unlocked much of the code to chocolate’s allure.

“To develop better chocolate, you need to know the chemistry behind the aroma & taste substances in cocoa & other ingredients,” says Schieberle, the recipient of 2011 ACS Award for the Advancement of Application of Agricultural & Food Chemistry. “That understanding begins with flavor substances in the raw cocoa bean, extend through all the processing steps & continues when chocolate melts in the mouth”. A couple of the more prominent steps include flavor precursors formed during fermentation which are then drawn out in the Maillard reactions of roasting curves to transmute flavor profiles. In effect, a massive chemical reaction occurs.

Additionally, beyond the distinctive flavors that evolve throughout a chocolate’s production, their perceptions are shaped by receptors along olfactory nerves & on taste buds. 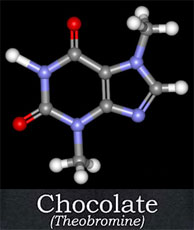 Schieberle & colleagues have identified sub-components in cocoa that mimic overall chocolate flavor. They then re-assembled those select elements into recombinates containing them. Taste testers couldn’t tell the difference between them & actual whole chocolate when they sampled the concoctions. Incredibly, those individual sub-components, teased out in isolation on their own, exude scents of non-chocolate items such as potato chips, peaches, meat & more.

He calls this large-scale meta-sensory analysis “sensomics”. It involves compiling a profile of the key chemical players responsible for giving specific foods their distinctive taste & aroma. In other words, chocolate annotated as any modern volume of Shakespeare.

For instance, to assemble baseline cocoa aroma, only 25 of the 750+ compounds that comprise a cocoa bean need be present. For cocoa taste, it’s only 15.

But because no single compound has yet been detected to carry the “typical” cocoa signature of solid CQ (for Chocolate Quotient; that is, core cocoa perfume free of any nuances, under tones or over tones… be they high acidity that resembles berries or low tannins that conjure up mushrooms), researchers had to pick apart individual aroma compounds & put them back together for taste testers to experience. This entire study improves the understanding of how & which aromatic substances interact to stimulate flavor receptors that finally generate the perception of chocolate in the brain.

The group also came across a way to further modify the taste of chocolate. By adding sugar to cocoa before Dutch processing (also known as alkalizing), chocolate becomes even milder &, moreover, this simple step lowers astringency, creating greater velvet mouthfeel beyond the customary conching process.

Taken altogether this marks another milestone in the dawning Science of Chocolate era that began in earnest in 2008 when mapping the cacáo genome accelerated. This era represents the 4th wave of chocolate history in the West (the previous 3: a) Discovery (1502 to circa 1827); b) Industrialization (1828-1983); c) Artisanal (1984-2012?). The promise of such research inches closer to a dream-come-true for the chocolate industry: synthesizing an artificial chocolate flavor which, due to cacáo’s manifold compounds, has proved elusive so far. Once that happens the candy giants can dramatically change course. It would afford them the luxury to abandon the “20/20 Zone” around the equatorial cocoa belt where cacáo only grows, escaping its misery of tropical crop losses & diseases, plus political instability, graft, corruption & social strife. Who needs all that when a vision foresees chocolate that can be manufactured in the cozy confines of a climate-controlled lab.

As ever with science & life generally, these findings present a double-edged sword that can cut a couple ways.

On the one hand the implications of the sugar-Dutch technique suggest that Schieberle’s generalized findings will be directed toward the mainstream candy industry; to allow it to further standardize chocolate into the most generic product possible that can be replicated time & time again without variation to suit its mass marketing & mass production tastes.

On the other hand, Schieberle’s work potentially offers artisanal makers a broader palette for chocolate variety & specialization. The ability to designate certain features in the manner of parents selecting traits for their yet-to-be-conceived newborn is irresistible & inevitable. That in turn would build-in differentiation between the boutique niche & the mass production candy bars that can be played off of. And, if incorporated with cultivation in the field that account for terroir, a true bifurcation may take place: the hermetic GMO engineered type versus the new-school organic — planted outdoors.

One, Big Candy, could deliver value with cheap whitebread product while the other, Artisan Barsmiths, caters to humans who still value diversity & authenticity because premium chocolate is more than just flavor… it’s a full sensory buy-in to an environmental, ethical & economic movement in concert with the 9th Law of Chocodynamics: U-N-I = 1 People<->1 Planet<->1 Prosperity.

(For a major media outlet, check the Toronto Star article which used the C-spot™ as a resource)