PART I -- Everybody, Headfirst into the Gene Pool: Sex, Drugs & Opera

Prospects are so frightening & staggering that Big Candy has no clue what they’re really chasing other than to desperately keep the current system of huge yields & cheap candy going – their definition of ‘sustainability’. They might only have to venture as far as the tip of their tongues for the break they need.

Mapping the genome, hacking into the cacáo code for whatever the haul might bring, dovetails nicely with emerging trends for growth in the industry. An artificial chocolate? Evasive so far given cacáo’s 800+ compounds that have confounded food engineers. A prescription-strength street-legal high (banking off chocolate’s cocktail of mood-altering agents)? Or just the best damn taste on the planet (already a fav flav among Earthlings, chocolate is experiencing a retro-revolution back to its roots as pure flavor powerhouse).

Investigators delve into the seedy world of super clones & speed breeding that take shape in labs before heading out into the field… a far-flung chocolate expanse over which researchers span across the “20/20 Zone” — that tropical magic belt 20º north & south of the equator — in which cacáo only grows. 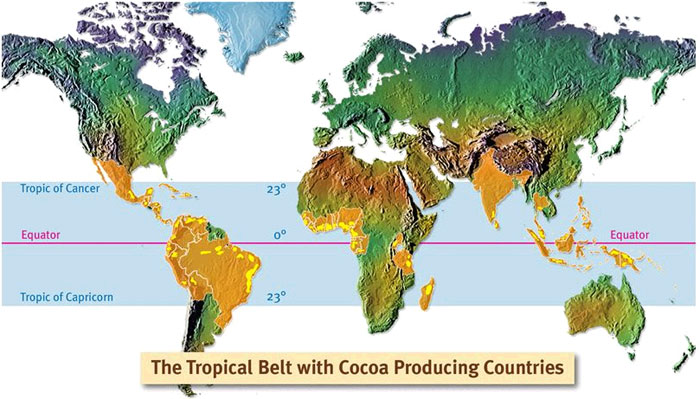 The 20/20 Zone (courtesy of the German Cocoa & Chocolate Foundation)

Hot spots include Central America where, starting around 2,000BCE, under the stewardship of the ancient Mesoamericans, cacáo culture rose to arguably reach its zenith during the late-Classic to Terminal Mayan period (circa 500 to 1,000 CE). Trees that dot their once-gloried cities, & are now archeological sites, may be descendants of the grand empress of them all – the fabled Criollo. This ancient classic varietal gained the highest degree of cultivation in pre-Columbian times, naturally selected for traits prized by them for over 1,500 years that were so fine it could be relished without any additives whatsoever (no sugar, vanilla, chili, etc.). Its inherent supple chocolate, ripe with a ‘strawberry ‘n cream’ tones, still make it the most prized treasure in the chocolate kingdom today.

In the wild, Criollo survived quite well for centuries. But under cultivation it reacts like an operatic prima donna: a sexual inbreed producing lower genetic diversity, the fewest seeds, & fluctuating annual yields while evincing a delicate thin-skinned nature / fragile make-up. Hence, susceptible to pestilence & shorter lifespan. All leading to what’s clinically known as consanguine or inbred depression which can have disastrous effects in plants as much as in humans (the collapse of the Hapsburg Empire due to incestuous intermarriage is just one illustrative example).

Scientists hold out hope that trees in & around the Lacandón forest, a sacred grove rife with Mayan sites in modern-day Chiapas Mexico, may be relics of the past that hold keys to cacáo’s future.

Or the forests of Xoconochco (Soconusco) to the southwest that was the crown jewel from where the Mexìcâ (Aztec) Empire sourced its best cacáo. During the reign of Ahuitzotl (1486-1502), the Mexìcâ extended their reach from the capital of Tenochtitlán down south to Xoconochco, waging a war in 1495 against the Mam Maya to control it. Xoconocho’s fertile soil & humid climate produce an ideal chocolate, unlike the central territory up north which is both arid & elevated, two factors making it difficult to grow cacáo, leaving the Mexìcâ high & dry.

Soon the Spaniards took it all over with the conquest of the New World, & got hooked as well. A line attributed to Hernán Cortés’ lieutenant known only as “The Anonymous Conquistadore” (speculation points to Francisco de Terrazas) has become a chain letter sent across the world: ‘the divine chocolate which builds up resistance & fights fatigue… permits a man to walk for a whole day without food’.

Could these trees be descendants of what Francisco Hernández describes in his nearly 900-page natural history – Obras Completas? Completed in the 1500s after he surveyed the landscape & spotted aboriginal Criollo, Hernández includes the pre-Hispanico Tlalacacáhoatl whose tiny pods were roughly the size of a jumbo egg compared to the footballs grown today. Perhaps this cacáo, in a twist of poetic & social justice, possesses the inherent survival strategies to solve the riddle plaguing the entire species. And revive a longstanding tradition in a drama writ small of the centuries-long saga of Theobroma cacao, particularly in its New World birthplace, which parallels to a large degree the story of cultural ascendancy followed by a struggle for cultural survival of the indigenous people living there, some of whom continue to cultivate it to this day?

As rich as that treasure trove appears, the real motherlode lies in the Amazon Rainforest – generally accepted as the cradle of the species. 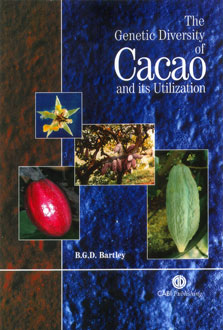 Incredibly, no comprehensive survey of cacáo in the Amazon, let alone the world, had ever been conducted until Dr. Basil Bartley, a field & lab scientist at CEPEC in Brazil, published The Genetic Diversity of Cacao & its Utilization in 2005.

No matter what stack of chocolate you’ve climbed up to, this goes down a rigorous, even punishing, book. Takes the extremely long arduous slog down the Amazon — seemingly all 3 million square miles of it, paddling over its 1,000 tributaries, the most circuitous route of all… enough to give malarial headaches — thru the cartography & bio-diversity of cacáo’s botanical history. Actually trekking on foot might feel quicker.

Just when it appears appropriate to question what all this is for, Bartley picks up the pace & races thru whole continents, indeed the rest of the world beyond South America, in a lightning blitz to the end with a startling revelation: when it comes to classifying cacáo, much of the popular opinion & conventional wisdom is dubious at best, spurious at worst.

Viewed by the industry & colleagues as an iconoclast, he deserves credit for even undertaking what too few have dared. That is to say, untangling the thicket of cacáo’s genetic past & present quilt, relying on both his own field research & that of the historical record gleaned from the great expeditions of Preuss, Pittier, Pound, & others to finally bring rigorous scientific classification & clear the field of the nonsense of Criollo, Forastero & Trinitario – supposedly the only 3 “types” of cacáo found in nature.

An analogy by way of diversion: a friend from Milano explained some critical dining cues in heavily accented English one night while on a date in a NYC, what else?, Italian restaurant. They are: if the establishment has “red & white checked picnic tablecloths, you leave immediately; if you have to ask the staff to bring you some bread, you leave immediately; & if they don’t already have olive oil waiting for you on the table, you leave immediately.” Since this place (not her selection, btw) failed in all 3 areas, we stepped it for Il Mulino (her choice) where the menus came without prices &, as for what to order, our minds were automatically made up for us by the chef himself deeply busy behind the kitchen door, singing an aria, whom we only saw after the plates arrived.

It’s a matter of authenticity.

Bartley’s gargantuan, nearly impossible task requires resources, time, & an immense overview – all of which are in short supply. That much of the specie’s diversity lies locked in the Amazon rainforest being felled at the rate of a couple square miles every day makes it all the more critical.

His work occurred before the development of DNA fingerprinting of cacáo. He relied on morphology & phenotype analysis (basically visual evidence, much as an airplane pilot would use visual flight rules without instruments). Since then, lots of DNA testing by Ray Schnell, Dapeng Zhang, Motamayor et. al., largely confirm Bartley’s outlook; by no means a precise overlay but enough of an overlap to say Bartley was more than just on the right track.

In the pursuit of accuracy & the primordial urge to ‘get it right’, he & they do justice to the tree lest fallacies take hold permanently as folksonomy.

The result: a plethora of cacáo types are now being recognized & recovered, up to a dozen & counting. Added bonus: the old school heirloom varieties actually taste superior, full of flavor that tastes like… well, real chocolate, fueling a small but growing pack of chocolate hounds on the prowl for supreme good taste. In a word: qualia (Latin for indescribable quality).

Parallels to the pitiable tomato are hard to miss. Like chocolate, the tomato is technically a fruit, not a vegetable. In 1994 it became the first GMO (genetically engineered whole product) to hit the groceries. The target of disparaging remarks ever since, its flavor sank to such levels of vapid cardboard that it revived interest in heirloom varieties now found in farmers’ markets.