Dan Pearson grew up in the Midwest, far from any cacaó trees. His backyard had a few Dutch elms & some lawn grass. Now an investment banker living in San Diego where cement painted green takes the place of sod, he puts together deals & falls in love with the good ones. Chocolate – who can turn that down? Especially after a couple shots of his favorite whiskey while playing weekly poker – a great pairing that vaporizes to annul any pussified chocolate-wine relationships.

From appearances he resembles the domed Breaking Bad character Walter White but unlike him he’s making good.

Dan often wears gold chains around black turtlenecks. The chains possibly compliments of his friend who operates the largest gold mine in Peru – part of a privatization & investment wave that came in with the Fujimoro presidency during the 1990s. That friend asked Dan in 2007 to contract with local farmers to supply fresh fruit for his miners. While searching for bananas, Pearson spotted a yellow football-shaped fruit. 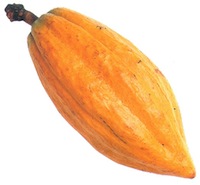 “Ahh, cacáo”, the answer came back.

“Aren’t they supposed to be brown?”

Golden ridges on these pods mark them with a certain appeal. Even more alluring – the unusually rare seeds within. Most cacáo seeds, or beans as they’re popularly known in the trade — dubbed Jungle M&Ms because all chocolate derives from them — come out dark purple. These particular pods have purple seeds too & also a high count of translucent pearly white ones. Those caught his attention, though it’s not all that remarkable in itself. Plenty of cacáo pods have both purple & white seeds. But these are rounder, bigger &, many swear, better to work with.

Of course taste is the final arbiter. Few have that.

At this stage they’re a long way from being manufactured into anything resembling chocolate, which requires a long production chain involving many steps. Usually grown in one place, then shipped thousands of miles to another, practically everyone in these parts plants cacáo or knows someone who does but almost nobody turns it into finished chocolate bars. Perhaps some roasted nibs & hot cocoa & that’s about all.

Incredibly, this very first cacáo Pearson was introduced to is the same one he has stayed with years later. All in keeping with deal making M.O. & falling for the good ones. For some, one taste is all it takes. In Pearson’s case, the pulp did it.

Cacáo pulp is a gelatinous substance that surrounds the seeds inside the pod, & a key component in developing flavor pre-cursors during the crucial fermentation process when it penetrates them to realize the majority of a chocolate’s potential end-flavor. On its own, the pulp Pearson sampled fresh out the pod tasted of sugary lemonade.

He instantly acquired the itch… that tick visited upon chocolate obsessives… & badly. It sucks them in, pulling them thru a vortex. Just when they think a floor has been reached & they’re so covered in it that they can’t get any deeper, the bottom falls out in an endless downward spiral.

Like a desperado, he madly wanted to take some home… for his friends & himself. But how? Such tiny quantities of these cacáo seeds could be found, only grown on isolated tracts, & would the local people part with any? Thankfully, yes.

The unprocessed / unadorned beans or, more technically-correct, ‘nuts’ were quite astonishing by themselves. Their shape (uniform & perfect), size (rather large), color (40% white / 60% purple) &, most of all, their organoleptics (snob-talk for “taste”).

One grader in the States described allotment #54 the ‘Studio 54’ of cacáo nuts for their disco ball effects on the tongue. Pearson wasn’t absolutely sure what that meant though it sure sounded good & transporting… all the way to… the 1970s. Like, wow, chocolate can do that?

Intuitively he felt he had something special but he neither knew exactly what nor did he really know better besides. But always the businessman, he got to thinking ‘hmmm, maybe this can be exported!’ He’d have a competitive advantage as long as he could put it on lockdown from speculators moving in on the turf.

A triangular canyon about 12 miles to a side in one of the many deeply-eroded valleys along a 1,000 mile stretch of the Marañón River which hugs the Andes foothills before making a great bend toward the east, cutting thru the mountains to join the Rio Ucayali… their confluence merging into the headwaters of the mighty Amazon River.

Mind-numbing polar opposites encompass the surroundings. The Andes can be cold (remember to bring fleece) & the particular mountain range – La Cordillera Blanca – truly amazes, with 20 peaks over 6,000 meters each. To go from that perpetual snow, down to hot humid jungles along the Amazon where the rubber barons like Carlos Fitzcarrald once got their hordes of Bora slaves to carry Eiffel’s iron tower (the first prefab construction ever made / engineered), across liana bridges over torrential rapids, definitely plays on a sense of space, time, & what’s possible in a few days. A glacial expedition that sounds symphonic in the keys of blue & white, eyre & crag, that goes from soroche (altitude sickness) to mosquito bites in a double-heartbeat.

One hardly needs oxygen-deprivation to be propelled into a profound nod toward the several biomes on the verge of… obliteration.

The title of Ciro Alegría Bazan’s novel, Le Serpiente de Oro (The Golden Serpent) refers to Rio Marañon. Set among its banks & villagers, it details the struggle for survival along a river full of rapids, reefs, gorges & whirlpools that can be fast & tempestuous; the very source of their life, death & renewal.

Rugged in all its extensions, people here have a lot to deal with. Low-lying snakes from pit vipers to the bushmaster with its venomous toxic-cocktail that’ll induce respiratory failure accompanied by massive internal bleeding.

Next the big game:

Toss in the small critter ticks, chiggers, gnats, & ants & everyone has a personal complaint. For some, ants present the biggest nuisance but anteaters equipped with a long, sticky tongue that flicks 3 or 4 times a second, take care of ‘em (& people too). Mosquitoes are a whole other problem. Smaller than their Alaska cousins that fly around as big as helicopters, the Amazon variety nevertheless earn their nickname ‘dive-bombers’ every second of the day.

Add grasshoppers jumping about. And the cicadas which thrum the eardrums all night long so the few who might be able to sleep have a backing soundtrack for their dreams.

About the only safe attraction for humans are the butterflies.

If they survive the natural forces, people then have themselves to contend with. The social jungle includes a history of divide & conquer, both pre- & post-Columbian. Over the centuries, the powerful killed off the loudmouths & rebels. As a result, heavy class stratification & a general pacification hang in the air. Entrepreneurialism & creativity are absent. People would rather lose their right hand than think too hazardously outside this box. If Yankees suffer from a superiority complex (that patriotic real-estate of flag-waving, stars ‘n striped yahoos parading behind pom-poms & rah-rahs), Peruvians attend to a national inferiority, in a strangely anti-confrontational society. Walk into a post office & cut in line — even in front of someone waiting for hours — without any consequences. Go on, try it. The victim might also refuse a gift in the process unless they pay the full value of it for fear of being framed with stolen goods.

Typical throughout Latin America, an inverted social landscape predominates. It places the rich, merchants forming a wealthy enclave, in the lower valley. Up high, the mountain people, loosely self-identified as semi-nomadic Awajún, may be descendents of holdouts who resisted the conquistadores & fled to the hills deeper in the canyon. Their ancestors were hunter-gathers, river-fishers & peanut farmers. They speak no Spanish, enjoy no infrastructure, & hold no title to their property. Instead they rely on ipáámu or self-help, & a belief in Núgkui (mother earth) to ensure her annual agricultural bounty, & Bikut (father shaman) who transforms into hallucinogenic plants such as ayahuasca. Just one cup of it & drinkers communicate directly with the spirit world.

In the middle reside farmers who put down a few stakes & survive on what they grow. They live off the land in much the way that Jefferson envisioned for his agrarian revolution; from where most of our forebears in the USA came.

That they arrived in response to a government-sponsored program in the early1960s promoting free land use – in a ‘Go North, Young Man’ scenario – underscores the dislocation & discontent felt in many quarters. In addition to how the American West was won & Indian Reservations instituted in the frenzy of the Homestead Acts, similar migration patterns in Chiapas Mexico provoked the Zapatista uprising in the 1970s & incite tensions today from Papua New Guinea to West Bank Settlements in the Middle East.

To domesticate cacáo & coffee in hardscrabble country like this entails more than government land grants & a dream, its calls forth the industrious.

For all the talk of jungle, cannibalism, & savage tribes, these villagers are a proud & generous lot. Sure their adobe farm huts constructed with mud & straw come equipped with few if any amenities like electric garage doors, a Viking fridge, flatscreens & security alarms. Most are lucky to have an outhouse, few of which have seats; just a poop chute down a hole. On the plus side when the rains come & homes wash down the mountain, it all just merges into one organic mudslide. More compost for the food growing right in the yard & animals running around that’ll be dinner some night.

Wading into the – vulgarity alert – shit because that’s what it is… when you’re in the jungle, it’s the jungle, baby, & few humans can hack that… Pearson now finds himself thick in the middle of it. More than just metaphorically, he’s stuck with no way out.

Roads? Funny… none to speak of, save for some dirt paths.

And yet deprivation never stops villagers from treating him, the complete stranger, with open arms. He’s well taken care of.

The novelty of gringos somewhat explains their hospitality. But it’s pretty much the same story wherever one goes: the salt-of-the earth accord their visitors a royal welcome, one that possibly costs them several months of their hard-earned toil.

So, other than vaguely mentioning a large village of 3,000 people down wind & several more communities of a couple hundred here & maybe another hundred there scattered in remotely throughout the valley, Pearson publicly holds pat on divulging anything more as to his precise GPS coordinates lest unscrupulous outsiders, cacáo bounty hunters, descend on it to snatch it up. Score it one-half protection, the other half self-interest. Either way, to find it, any would-be competitor would have to endure a South American version of Stanley-meeting-Livingstone. That, the chronicle of journalist H.M. Stanley sent by his newspaper, The NY Herald, to search for the long-lost missionary-explorer David Livingstone & find him in the middle of Africa. Or at least until Pearson charts the course, implements the plan, & announces it to the world himself.