the C in the C-spot 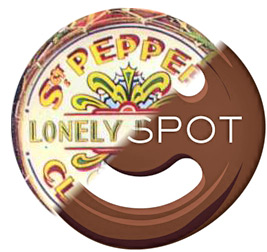 The hysterics are wrong. 9/11 DID NOT change everything. That event, however momentous, forms part of a longer, continual loop of what prescient poet Robert Burns described back in 1785 as “man’s inhumanity to man”.

Sgt. Pepper – now that arguably did change everything. A milestone for a band’s evolution as well as music-social history (at least in the West) that bridged the divisions between hi- & low-art, making pop classic. Hard to appreciate since the likes of Michael & Madonna devolved it back into entertainment much the way Broadway musicals did European operas. That left the field open for hip-hop to get it real again (RE: serious).

Or Facebook… which seeks to unchange everything as if 9/11 might never have happened, in the way it overcomes artificial barriers that separate like-minded people.

Likewise, a couple bars could prove to be historical markers when looked back upon 10 to 15 years in the future.

Just about all of chocolate’s history has run on a dual or even triple track due to the fact that it derives innately from the tree Theobroma cacáo, which requires transforming otherwise bitter seeds (for the most part) into this sumptuous treat called ‘chocolate’.

So a) pre-Columbian Mesoamericans for over 1,500 years cultivated to the highest degree what are now classic heirloom varietals, naturally selected & bred for traits they prized.

Then b) modern technical engineering that incorporates their ancient processing methods deep within its machinery — as well as some new ones — elaborated upon the original chocolate manufacturing. Many socio-political developments coincided to bring it all to fruition. In short, a complicated story.

Even so, c) flavorings were added to either mask or improve the invention, most of them, again, rooted in Mesoamerican lore: the twin powers vanilla & pepper, as well as achiote, corn, honey, & later the grand catalyst of them all — cane sugar, a decidedly European inclusion.

(To those activists campaigning on “Don’t Mess With My Chocolate”, you’ve been messing with it every time you add a teaspoon of the white stuff, let alone half a bar’s worth. Distinctions between cocoa butter & vegetable oil, though not trivial, sound like childish rants when viewed from the larger perspective. Besides, heavily adulterated candy allows for premium chocolate to differentiate itself & provides a marketing advantage.)

Pralus’ Le 100 and Zotter’s Das 100 plus Domori’s Puro point beyond the possibility (their very release has already made it possible) & to the real promise that, thru genetic research & culinary technique, cacáo will regularly be able to stand alone & excel without the aid of “any additives whatsoever” – to cite Fray Bartolomé de Fuensalida’s take on a Mesoamerican chocolate he sipped in the year 1618 – & grant fresh credence to the cliché that everything old is new again (& hopefully improved too).

As in 100% unadulterated, pure-play chocolate. Nothing says chocolate more. 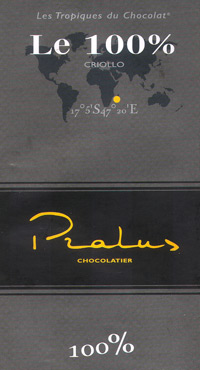 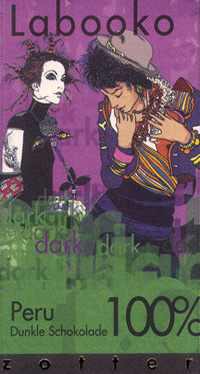 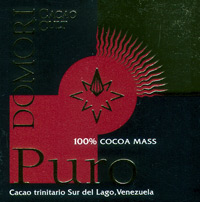