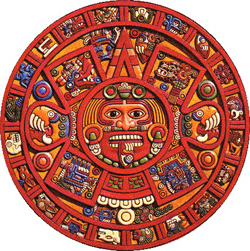 Epictetus, a slave-turned-philosopher, observed that nothing great is created suddenly, ever since Ecclesiastes reminds that ‘To every thing there is a season…’

If overwrought pairings & comparisons to wine were inadequate, now comes Vintage Chocolate, a concept borrowed from the vineyards, assigning a harvest date to the bar. Wine is bottled time requiring years of aging, essentially a dicey crap shoot, rolling rotten grapes, hoping that a gangly ugly-duckling with too much make-up & lipstick will swan out into a fine model.

Cacáo is different. It’s etheric; simultaneously ancient & young; the here & there, before & after… forever beyond: making sensory experience primary as a means to glimpse transcendence, captured in the “eternal now”. It has no need to sit around gathering dust, sediment, & moss, any more than it needs a spit bucket, a meal to wash down, or an enema bag. Stamping vintages on bars would, on the face of it, serve only to contrast one year’s crop to another’s.

But maybe there’s more back-story here to a particular chocolate’s lifeline than just being in the present moment. If nothing else, people often assess value based on age (antiques the prime exemplar). This might help cacáo escape its cheap-commodity / candy-fodder state.

Theoretical & anecdotal evidence suggest that allowing a bar to mature under climate-controlled settings softens flavor tags & rounds off the sharp spikes & edges, mellowing the overall profile. What else the aging process might do – whether bringing greater concentration or added hues to the flavor graph – currently remains speculative for aging chocolate, though hardly novel (Oviedo in 1527 chronicled how the Nicarao in the Nicoya Peninsula of current-day Nicaragua allowed chocolate to stand for 5 or 6 days to improve quality) is an ongoing process, requiring years of evaluation to fully understand it.

This could change however… in due time with a little patience.

Currently, most Dark Chocolate bars carry an expiration date of 2 years from manufacture. Why 2 years? Nothing scientific or research related documents anything determinative about 2 years. Could it just be convention adopted ever since Dr. Juan de Cárdenas completed Problems y Secretos Maravillosos da las Indias (The Problems & Secret Methods of the Indies) in 1591. He recommends that chocolate can be kept for up to 2 years. Being a physician, maybe people simply accepted what he had to say & followed him blindly. Where did Cárdenas come up with the 2-year figure & did he subject it to any testing? 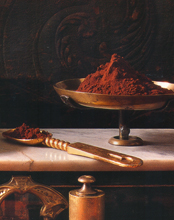 Enter Dr. J. William Hurst. Dr. Hurst knows a bit about aging chocolate. A biochemist by training & world authority on cacáo compounds, among his various research assignments he conducts chemical analysis on cacáo traces found in Mayan drinking vessels dating back thousands of years. Though he has yet to taste any actual ‘Mayan chocolate’, that is, fingering the sides of those pottery vessels (the equivalent of ‘licking the spoon’) due to contamination by foreign residues, Hurst has plotted oxidation changes in chocolate’s many formats (bean, bar, powder, etc) & compared his findings to other edible specialties. As the lead investigator in a study of antioxidant activity on olive oil & tea leaves, Hurst found that those are unstable over product shelf life of one year, in contrast to cocoa oxidants which remain quite stable, retaining very high levels of flavan-3-ol content for instance, including samples taken on 80 year-old cocoa powder & 116 year-old cocoa beans!

From this it might be deduced that rancidity is probably minimal since cocoa butter should be buffered by cacáo’s antioxidants. One measure for rancidity – peroxide values – also remains stable, experiencing very little oxidation. However, with extreme aging a chocolate may be prone to revert to Beta VI crystals & would then require re-tempering.

In conjunction with the C-spot™, Hurst wonders whether ‘Vintage Chocolate’, a concept that seizes upon Valrhona’s practice of dating Grand Cru bars by the annual harvest (technically it should be done semi-annually since most cacáo-growing regions harvest twice a year with a marked difference between rainy & dry seasons), warrants investigation beyond a theoretical standpoint to conducting an empirical experiment. Such a study would design a protocol to measure aging effects by —

1) Enlist suppliers & establish a bank (or collection of material to be determined) of beans &/or bars for best encapsulating a vintage during the aging process. Considerations involve:

2) Maintain climate-controlled storage away from light in a cool environment because, as Mary Wagner, a chief technology officer for Mars Botanical says, chocolate is “very sensitive to oxygen, light, & heat. The moment the pod is opened, the clock starts ticking.” The proposed ideal setting: a dark vault climatized to ‘55-55’ (cellar-temperature of ~ 55ºF / <55% humidity [though a 2009 study by Lia Andrae-Nightingale et.al. suggests 94% RH as optimal]) perhaps treated with nitrogen to minimize redox reactions – reduction-oxidation reactions usually occurring in the absence of oxygen. Inside a cask, for instance, redox reactions generally improve wine’s taste. This slow aging process takes years, even decades. Oenologist Peter Goddon at the University of Adelaide in Australia weighing-in on the still-raging debate between cork vs. screwcaps says that closure conditions may have a greater impact than terroir! Differences between the 2 can be dramatic, causing it to age differently & change drastically.

The study may also entertain controlled-oxidation – i.e., careful exposure to the elements that could improve a chocolate’s flavor better than wrapping it tight as a mummy. To cite cigars again, they react positively to oxidation… up to a point. Its tends to mellow out tannins over time, breaking down astringency & bitterness, as well as meld flavors for more unified taste. Of course oxidation may negatively impact cacáo’s health benefits since those same tannins are composed of antioxidant polyphenols.

3. Employ tasting panels (people experienced with chocolate’s sensory profiles) & analytical tools (electronic noses; metal oxide sensors; mass spectrometry) to track the interaction & synergies among marker compounds (both high molecular weight anthocyanins & condensed tannins – the ones that bind to proteins on the tongue – as well as lower molecular weight flavon-3-ols monomers catechin & epicatechin, plus dimer procyanidin B2) selected from the 746+ compounds that cacáo is currently known to possess… making it far too complex to create an artificial chocolate). 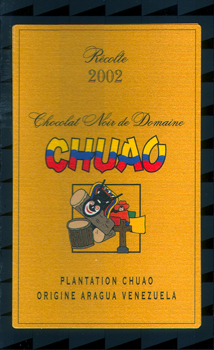 Chuao 2002: the beginning of future-collectibles for chocolate?