At 3,500 feet Fortunato’s sits up a gem amidst the emerald canyon setting below to perfectly reflect the gentlemen farmer who bestowed his name to it. In his mid-50s, humble, generous & gallant, Sir Fortunato welcomes visitors & sets the table as if a state-dinner for kings. He exudes by-gone charm, the kind that takes off the ladies’ coats, pulls chairs up for them & lights their cigarettes. In less than a couple flattered blinks, they’re sitting in his lap.

Ladies’ man aside, he’s nonetheless a devoted father &, if he takes you on as a friend, he’ll give the shirt off his back but will only take yours if he buys it. Neighbors obviously find him trustworthy & valued.

Like many farmers he too is the unassuming strong / silent type; one reason Noe & he get along. That demeanor shields the sentimentalist within. He’s been at it over 30 years. Fortunato speaks wistfully about the old days, before rice showed up & pushed cacáo out of the fields.

The rice nemesis — grown under the auspices of an aid subsidy because Peru at one time was importing the grain just to feed itself.  But rice demands so many input costs, especially lots of fertilizer. Cacáo on the other hand is indigenous & doesn’t require fertilizer except for another alien to these parts – the CCN-51 cacáo clone. Years ago it was planted in one corner of the valley as an experiment. Some loved it for its yield but all hated its taste. It too required high maintenance & massive fertilizer input. CCN-51 depleted the soil &, so out of balance & off kilter, it died without any, too feeble to survive. Same story with the 180 or so cacáo properties left for dead that once grew the original indigenous cacáo that made the canyon valley abundant with it. They yearn for a return to the good ol’ ways.

Fortunato’s is a classic estate. He never fertilizes & rarely if ever trims his trees despite the fact that yields consequently suffer. He just doesn’t like to cut branches.

Cacáo is secondary or even tertiary on his land thriving with limes, lemons, coffee, grapefruit, oranges, & honey. The inter-crop arrangement demands the small details however. Perhaps because of this, his is the best & he a first-rate Broman or cacaotero (Spanish for someone who husbands Theobroma cacao trees)… a shining example of agro-forestry flourishing with consistently good cacáo.

He’s very old school in other ways too. As the party mills about in several directions inspecting trees & leaves for test samples, he prepares some old-time chocolate. Over in a disheveled stand of trees by a slight rise in the property, one tree in particular interests Noe. He spends time examining its pod, husk & seeds as Fortunato hand-grinds some cocoa nuts on a metate stone slab. Something about her, Noe says, feels special. The others in the group beg to differ, ridiculing this tree’s scrawny silhouette, their cackles of laughter heard over a workhorse supplying power to expel juice from raw sugar cane, then cooked over a wood fire. Fortunato stirs the liquid sugar down to cool before pouring it into molds. At that very moment Brian notices a sack of what visually passes for powdered sugar. He needles Fortunato to quit horsing around & just add a few scoops of this. That loco-gringo again with his suggestions.

It contains no ordinary sweetener.

The Incas & their predecessors, the Tiwanaku, habitually chewed leaves from the coca bush Erythroxylum (from which the popular drug of power & ego – cocaine – is derived; not to be confused with cacáo & cocoa used in chocolate). Erythroxylum is native to tropical valleys terraced beneath the high altiplano in the cross-border area of Peru & Bolivia around Lake Titicaca. Like cacáo in Mesoamerica, erythroxylum’s socio-political force was greater than its physio-chemical effects in Peru. It knit those empires together who treated it as a divine plant with spiritual & medicinal properties, often taken by priests for endurance during ritual ceremonies, just as Muslim Sufis drank coffee or Buddhist monks tea. It bore none of the shadowy underworld taint associated with its potent extract among modern hedonists & workaday consumers around the world now. (In fact, the first aboriginal to be elected president of Bolivia, Evo Morales of Aymara descent, was a coca grower.)

Because Erythroxylum coca’s stimulative effects were readily accessible, Peruvians had little need for Theobroma cacáo’s seeds of which they made only limited & then mostly medicinal use; certainly nowhere near the extent of Mesoamericans who widely cultivated & revered cacáo.

Brian’s marketing sense kicks it into hyper gear. Pharmaceutical-strength chocolate. Swap out the sugar for another kind of ‘brown paste / white powder’. Combine coca with cocoa. They’d go well together. One adds a touch of bracing chemtrails to this area’s inherently floral cacáo of mild baseline chocolate. Everyone will be ecstatic… Fortunato may single-handedly halt the “war on drugs”.

The ad campaign for this particular peace process revolves around ‘Chocola… it really is the Real Thing’. Brian hums a few bars of that jingle: 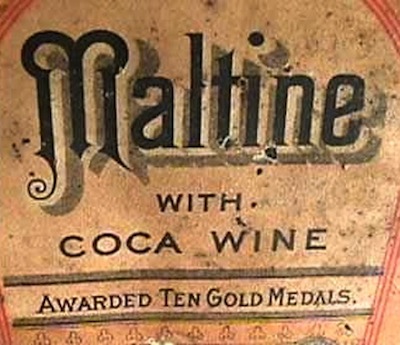 Maltine manufactured in New York — one of a variety of over-the-counter concoctions with cocaine on the market in the 1800s. It made people happy & also worked as a medicinal treatment. Suggested dose: 1 glass with every meal; children ½ glass.

Hey, it worked (snort of) for the Sendero Luminoso (Shining Path aka PCP for Partido Comunista del Perú), the Maoist guerrilla thugs. They imprisoned captives to work the coca fields, financed a nationwide insurgency thru the fruits of that labor, & terrorized the countryside under their motto ‘We’ve a Right to Rebel’ — a deadly variant of the Beastie Boys’ ‘You’ve Got to Fight for Your Right to Party’… without music & alcohol naturally, or any celebrations whatsoever… all severely restricted by these South America Taliban.

In response, the central government in Lima that could barely provide social services managed to unleash their own police thugs on the populous (Grupo Colina & the aptly named SIN for Servicio de Inteligencia Nacional) in a cyclical downward spiral of ruthless violence; ugly & hideous beyond disbelief. Favorite tactics included strangulation, slits throats & being cremated alive.

Whatever one’s ideology across the political spectrum, the corporate-security nexus in league with the bourgeois hardly merit praise but it appears as the lesser of two evils next to the Shining Path. Their leaders / hoods thought they were wooing & winning people over in spoiling to fight everybody — the state, opposition parties, the church, foreign diplomats, MNCs & non-profit organizations. Even organized labor, plus the very campesino peasants the Shining Path swore to defend. And, of course, gang beefs with fellow Marxists the Túpac Amaru.

The contemporary British writer with the most daunting surname in literature, Nicholas Shakespeare, wrote The Dancer Upstairs referring to the capture of the Sendero’s commandante inside a safehouse in a posh Lima neighborhood above a ballet studio. He portrays the leadership as generally base characters absent any heartfelt emotions.

Theodore Dalrymple (pseudonym for Dr. A.M. Daniels), author of Coups & Cocaine, witnessed plenty gut-wrenching episodes in his several tours of duty as a traveling psychiatrist around the world. He likened their prospective rule to the killing fields of the Khmer Rouge in Cambodia.

Eventually their struggle would logically turn its weapons on themselves since the Sendero were intoxicated by their own dogma leading down a dark totalitarian path that, in their very declarations, rejects human rights altogether. Neither angels nor humans, people are lower than dogs & just mechanized spawn in their machinery.

Fortunato claims the powder literally fell out of the sky, apparently jettisoned in a last ditch maneuver to evade DEA agents in their overarching pursuit to eradicate the crop & apprehend narco-traffickers. His alibi sounds remotely plausible if outlandish, for the domestic airline LC Busra has long been suspected as a courier. Similar tales abound of bales washing ashore along maritime shipping lanes; the backside of Cozumel, for example, tossed overboard from boats destined for Miami.

The conversation flow & work load gives everyone a little vertigo, too dizzy-giddy to tell whether the finished bar Fortunato prepared contains anything but ultra-fresh chocolate. This, after all, is cacáo’s home turf, sacred ground zero, since ten to fifteen thousand years ago, well before it was uprooted from its primordial birthplace starting in the 17th century to circumnavigate the globe, then turned into a mongrel tree, a cheap commodity & the world phenom it came to be. This the ultimate retro-revolution back to its rootstock.

Noe furtively tags that frumpy tree amid all the commotion & stuffs a few twigs — with leaves intact — into his shoulder bag.