As much as the brass wanted to jump with joy & announce their cache to the world, this was after all northern Peru. Across the border in Ecuador, headlines of Nacional transgressing into rival territory will be received as unwelcome news.

Huh? How’s that? Nations go to war over chocolate? Maybe companies but not countries, no?

The two neighbors maintain an uneasy peace. Publicly they resolved their differences by signing the Montevideo Declaration in accord with the Rio Protocol of 1998. Both were the product of a long-running border dispute that culminated in the Cenepa River War & ravaged the territory, placing Marañón Canyon right in the crosshairs.

Peru’s “populist-authoritarian” President Alberto Fujimori signed the treaty with Ecuador. His term expired, he sits under a cloud to this day, fraught with human rights abuses, & Peru still writhes from the paroxysms of the 1990s & naughts (00s) brought on by his triple ‘Fujishocks’: a) economic (austerity programs to reign in deep debt & hyperinflation); b) political (presidential-coups, scandals, sprawling webs of corruption & a guerrilla insurgency in control of many provinces leaving the country ungovernable); & c) social (disappearances, assassinations, terrorism, military emergencies – all amidst a judicial vacuum).

That the country held together at all during his tumultuous administration is to his credit. The cost however exposed the system as a sham. Peruvian democracy, he said, had been nothing more than “a deceptive formality – a facade”. This, a jarring comment in concert with his archenemies – the Sendero Luminoso — who believed the same. It was one of their stated reasons for boycotting elections from their start. Fujimori’s remark belies the network of double agents running double crosses throughout the society. His close advisor & head of the national intelligence service, Vladimiro Montesinos, was for example simultaneously arresting & trafficking in narcotics & weapons, receiving cash from both ends of the transaction pipeline. Fujimori & Montesinos have been imprisoned at the Callao maximum-security, which, in a bit of poetic justice, was built under their orders during the 1990s.

Into this nefarious morass, Pearson felt especially compelled to muzzle developments. Foreigners must conduct politics before business. Unless he could navigate the treacherous currents that are Peru, no chocolate would come to fruition.

He’d confront the issues head-on but tactfully, very tactfully, choosing a triangulate Peru / Ecuador / USA, to let all sides feel equally represented to play nice together on common ground. This entailed notifying the parties to defuse any surprises that could offend; & to avoid any snap reactions potentially caused by a single one of them losing face. It called for delicacy.

A first step into the office of a local official produces an indispensable liaison. Supt. Katerina, maybe 40 years old, & barefoot, greets Pearson warmly despite wielding an iron fist around town. Large, brash & outspoken… partially why others speak of her in fearful tones. She works hard, delivers on her word, & is extremely reliable; one of the few politicians anywhere who can boast such credentials. Before he barely finished introducing himself, Katerina takes him aside to moan about her romantic problems. “My 3rd husband, he’s around just for pleasure but I can’t get satisfaction nor cut him loose. Would you say I’m a man-eater?”

Pearson hopes not. At this very moment, he’s the only guy in the room.

The topic shifts to chocolate & she lightens up. They hop in her car for a quick drive to her house. Intensely rustic, her family shares a dirt floor together: “never saw the need for cement, linoleum or rugs, Dan”. Nor shoes apparently. She doesn’t own a pair. Says they’re only for vamps & tramps like Imelda Marcos, or some pop singer she vaguely heard about whom she calls ‘Madame Goo-Goo’. To keep warm, she constantly smokes a pipe, except as a precaution when asleep, fueled by various herbs.

Her grown son walks in. He appears to be in his late 20s.

“I’m the one who’s supposed to be telling you, child, about the birds & bees, the vices & virtues of life. At my age, I can do what I want. Besides, where Mr. Pearson comes from there are so many smoking bans that it’s refreshing for him to see a woman light up.” She hits the pipe & sucks in another draw.

Katerina raises goats & cultivates cacáo out back. A former Dept of Agriculture specialist, she explains between puffs how she used to advocate CCN-51 but not anymore. “A dumb clone”.

Upon swearing confidentiality & hearing Dan’s account of a special cacáo flowering in the Canyon, she whispers in his ear “I coulda saved you a lot of time & expense & told you that years ago but nobody around here wanted to hear of cacáo. It was all rice & coffee. They were the new cash crops. Intuitively we knew something was up, was good about our cacáo, just didn’t know exactly what. We couldn’t know the difference because it’s all we knew.”

She takes his hand in promising to clear & smooth his path all the way to the top for export approval. Women, remember, weave the social fabric the world over.

Having her in his deck gave him extra cachet with the growers in & around Marañón.

Immediately he intersects with the local muscle. Small-time stoners ‘n cokers, typically ex-military vets who know weapons. They rarely mess with farmers. They just want a cut; extracting the middleman’s pound of flesh in exchange for protection. Guys who see themselves as Robin Hoods making sure the Pearsons aren’t there to screw & pillage. The fact that Dan & Brian set up an FFS (farmer field school) for improving post-harvest techniques, pay a higher price & a share of profits, allows these enforcers to chill easy with nothing to worry about.

Next wrung up on the ladder, Katerina suggests an entrée at the US Embassy in Lima.

Constructed during the mayhem of the 1990s, the Embassy greets visitors with its 12-foot thick walls shaped into a sterile rectangular box. A glass ‘n cinder block palace except for Bernardo Fort-Brescia’s architectural design. He inked a skin of geometric tattoos on it of Peruvian textile patterns that form a monumental mural. It holds up extremely well even during the sublime pat down for security reasons at the front entrance. Feels all so ceremonial. 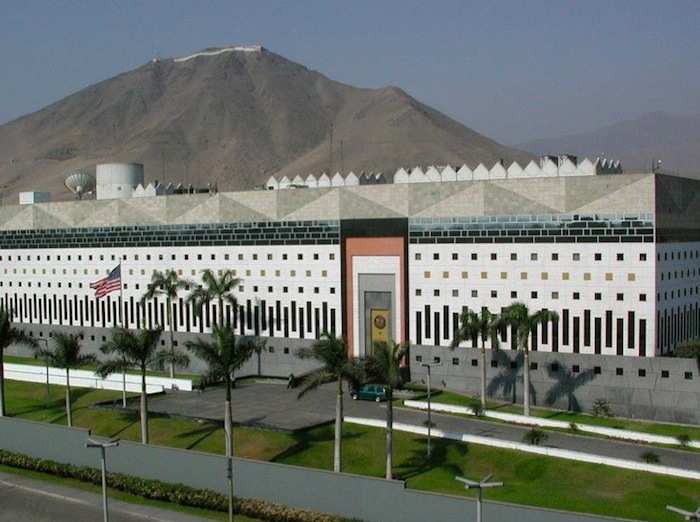 The US Govt had already assigned an attaché to the case whose portfolio carries real standing in Peru, Ecuador & Colombia. She swings between the 3 trying to eradicate cocaine & replace it with agricultural commodities. Hence her curiosity regarding Marañón Canyon since cacao is a popular if poor substitute.

She assembled a team of foreign-service officers for this meeting. They’re gushing with that true American ‘can-do’ esprit. Their interest level: high.

From a development perspective, the politics, economics & social dynamics at Marañón genuinely excite them. Should this meet with success – whether just on paper or actually on the ground — to have something positive happening on their watch burnishes the resume for future advancement within the bureaucracy.

To the last person, they want to chopper up to see the Canyon, slum with some real cacaoteros… for an afternoon at max.

A draft of a communiqué pledges that the U.S. Dept of State will commit $500,000 as part of the project’s research study, stating that this is “a foreign policy decision because of the long term benefit to the fine chocolate industry…” which has both domestic USA & global implications. (It delineates that cacáo as a cash crop ramifies with income for emerging economies & rainforest conservation; plus an incentive to promote it over illicit crops; cocoa is a jobs creator here & there.)

As the office charged with apprising all impacted countries of these developments, including the Peruvian Ag Dept in Jáen & the USDA Station in Tarapoto, the American embassy is conditioned to send notification after everything falls into place at the last minute.

Pearson excuses himself but first the obligatory call on the Commerce Dept located conveniently next door in the same complex.

Oh, & right as they’re walking out, several foreign-service officers demand some chocolate samples to taste for themselves.

“How about those Hershey’s™ kisses in that bowl on the desk?”

Pearson gets it. Unlike scads of buyers, brokers & even self-proclaimed “cocoa gurus” who are fraudulent in their professed love of chocolate — all part & parcel of the incestuous go-along-to-get-along crowd; some who never taste chocolate, rarely eat it & don’t even like the flavor(!) but just hang around the game for the payoffs (both financial & hyperinflation of their egos) — Pearson still has a boyish grin for it while developing a palate for ‘the really good stuff’.

He promises they’ll get theirs… after he clears a crucial hurdle.