Those best-practices that Marañon Canyon Cacao cultivates to produce cocoa could serve as a template for reviving cacáo in its natural habitat in the 21st century… at least for the premium segment. And perhaps even ramify the larger commodity markets + the wider industry.

Trees are husbanded by local villagers whose families, unbeknownst to the outside world, have tended to them traditionally for generations; they are supreme stewards of the land; have acted in concert with partners from the global North in technology transfers for advanced post-harvesting techniques; & are paid a super premium for their care which then gets plowed back into land management & infrastructure. In the long term, these premiums can be utilized for improvements in water systems, schools, community centers, etc., instead of the typical under-investments & deferred costs found on most cacáo plantations today… all the while with full traceability of produce that raise consumer confidence.

For an industry overrun by a terrible custodial chain / tracking, flawed logistics & mediocre product, this literally blows a breath & scent of fresh air.

Pearson sits in a cockpit at the controls yet he’s unafraid to step out himself & dirty his own hands. That combination of the Minuteman ready to drop his day job / comforts of home to answer the call at a moment’s notice, & the ‘Nacional Guard’ risking to preserve & protect the ‘Nacional interest’. A first-among-equals of the budding ‘Cocoa Party’ revolting against low-paying / big-spending candy giants that trod on cacáo fields around the world to feed its insatiable appetite for profits derived from candy bars.

Revealing & reveling his closet hippie side, Pearson sticking it to The Man.

Now almost in his 60s, two types of hippies existed back in the 60s. One never brought amenities to the party, always bogarting off everybody whom they expected to pass the favors. The other brought both the amenities & the musical instruments for all-night jams. Pearson belongs to the latter group though he might’ve forgotten since it was the best time in his life he can’t remember.

He has plenty of grey matter left though in the memory cells to understand that chocolate encapsulates one of the great prisms thru which to view the world prior to purchasing that platinum-word in academia: weltanschauung. Whether social, political, financial & environmental, all refract within chocolate.

For Marañón, genuine sustainability treats every aspect from the ecology (naturally organic) to the economics (beyond Fair-Trade… a Sweet-Exchange) &, most vitally, the interpersonal (genuine partnerships based on solidarity) – those 3Ps: People / Planet  / Prosperity. All done with the least possible interference from the swarm of agencies descending upon the Amazon to “certify” it, so much so it’s labeled up to the max: Fair-Trade, organic, Bio, Rainforest Alliance, 40 cents, Starbucked, UTZ, FSC, ISEAL, IFOAM, Fair-for-Life, LEED, renewable this ‘n that, any color as long as it bleeds green for money… the endorsements continue to pile on heavier than the suit of a NASCAR driver… just a small sampling of the 400 or so int’l organizations, plus more rushing to the scene, hopping to cash-in & sanction the “3rd World”. (Meanwhile, JFK Airport would pass for a bus station in many impoverished countries.)

Mostly theatrics & scheming when all that’s called for is to just refrain from dominion over the jungle by ordering it instead of relaxing in sync & harmony with it; rekindling its special place to escape to, not from.

Cultivation that develops responsibility & reaps prosperity could put a brake, however partial, on official graft, insurgent unrest, narco-trafficking, DEA ops & int’l largesse that perpetuates rather than alleviates poverty. It can also salvage the environment, not just in South America but in about a half dozen places that supply almost all our oxygen across the planet. If / when those are gone the ions captured in bars like Fortunato No. 4 will bear testament to remind future humanoids, the Robo sapiens, of the only place that had chocolate – Earth.

Although dinosaurs, saber-toothed tigers & woolly mammoth, among other creatures, no longer roam the planet, occasionally we encounter something that stays & more importantly speaks across the ages. Chocolate still continues the storied conversation in that vein.

Research with cacáo genetics accelerates at such a clip that new findings pertaining to Marañón Canyon have possibly already eclipsed it. But the drama of how it came about & evolves should capture attention for some time to come since it is chocolate making history.

As the Pleistocene Park of cacáo, Marañon Canyon inevitably will draw parallels to other sacred cacáo groves which have taken on mythical dimensions in the minds of chocoscenti around the world. Those hallowed names Chuao, Xoconochco, Rio Bení, Sambirano Valley. It belongs in their company. But in truth, it’s better organized than some prehistoric jungleland – more in line with a retro-utopia.

Retro because all the pure pristine nature in the Amazon basin inhabited by small “Stone Age tribes” & “primordial wildlife” that continues to grip our collective imagination – fantasized recently in a Rolling Stone article of an existence “unchanged since the dawn of time” – is largely secondary forest overgrown atop a civilization that lived here for at least 1,500 years.

The groundbreaking work of Michael J. Heckenberger among the Kuikuro indigenistas of Brazil’s Xingu Reserve unveils this terra incognito hidden under the forest canopy. In a rarity for the modern age, the Kuikuro have retained the full breadth of their culture – language, rituals, arts, & economy. Heckenberger’s Amazonia 1492: Pristine Forest or Cultural Parkland reads as a sequel to Charles C. Mann’s 1491: New Revelations of the Americas before Columbus. He shows that the ways of the Kuikuro, their organized settlements, gardens, fields, & orchards create a rich biodiversity using soil-enrichment techniques, long crop rotation cycles & a generalized forest management that form a direct link to their ancestors. Evidence of ancient earthworks tells their story, & how humans helped shape the rain forest by design. 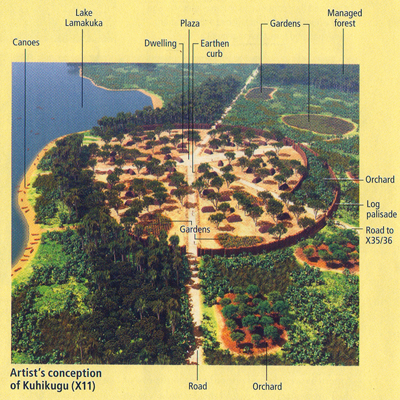 These societies practiced composting & recycling, controlled burning of vegetative cover for soil enrichment, making it darker & loamy. The size of each village palisade, & the sum of these population clusters, integrated close together into larger political units numbering 30,000 to 50,000, totaled perhaps as many as 10 million in all, compared to maybe 200,000 who inhabit the Amazon today. Theirs represent one model of land-use – a green proto-urbanism – ripe with advanced techniques for sustainable agro-forestry. It could be instructive in the 21st century & beyond in how we mold & redevelop transitional rainforests.

So there’s cause to rejoice for this particular cacáo is in good hands. The future in the shady cacáo groves & the chocolates salons around the globe looks brighter. Nurseries are sprouting up, seedlings taking root, new buds are flowering.

At the risk of getting carried away, a world heritage site the UN & The Smithsonian need to know about.

GO TO PART XVI –> Belly-Slammed Back to Reality

RETURN TO TABLE OF CONTENTS