Consider the above statements generalizations… to a degree.

In this companion to the first edition of the Deep Tasting series, The Rev. Dr. R.M. Peluso intervenes, preaching that though overly broad exaggerations, they, notwithstanding, generally apply. She then proceeds to tune up & dial in on specific matches that work with the caveat ‘all good things must pass’ so too these… are fleeting. 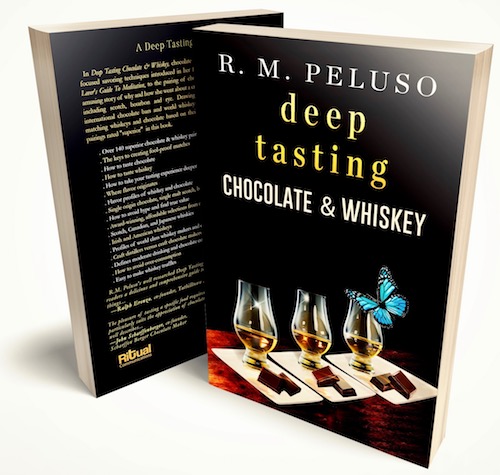 Peluso played at the forefront of American craft chocolate as a friend of Nancy Steinberg, the sister to one of Scharffen Berger Chocolate’s founders. They plied her with prototypes before hitting the market.

A meeting later brought her to contribute chocolate reviews on the C-spot™. Our deacon-in-residence, whom we now affectionately call Rev. Ron DMC (for Doctor of Meditational Chocolate), started dispensing small 5-gram neapolitan squares to her congregation as meditational devices. Before long, she was consecrating them for shared communion. Seriously, all true.

While known to utilize strict metrics in her chocolate analyst role, her definition of the best remains: whichever puts the biggest smile on the face. That definitely works better than some tortured technical exam sheet engineered by overly serious “sensory experts”.

Since then the good reverend has gone way beyond & skilled up to where chocolate amounts to the simple stuff; to where alpha-cocoa tasters fiddle around on backgammon evaluating upmarket Nutella™ & cocoa suntan lotion while she maneuvers triple-tier chess boards.

In Chocolate & Whiskey, she for the most part takes the hit ‘n miss out of the game for consumers. Sure a strikeout happens here & there. Hell, bat .333 (i.e., fail 2 out of 3 times) & anyone ends up in the baseball hall-of-fame.

Peluso scanned, sampled & scored for this book the winning combinations that rated highest to make the cut. Her calculus: always on the lookout for that 1 + 1 = 3 alchemy. Indeed, from prior assessments, some of the bars by themselves fall well short of superior grade, included here due to their being readily available & malleability for the task at hand (i.e., the combined forces transmutes their mediocrity, the proverbial lead into gold). For the buying reader, this reduces inefficiencies & oft-frutrations to trial ‘n error experiments, thus saving money.

The crude handle in a nib: a) chocolate bars with elevated cocoa butter levels + b) total cacáo-content around the 72% sweet spot, & c) matched to a whiskey complement rather than a contrast.

Chocolate & Whiskey also contains a sound glossary for starters as well as the initiated. Plus a section on historical inflection points causing a shift in flavor profiles due to the trade for casks, & marrying blends that turn out quite, well, polygamous. For instance, up to three-quarters or more of a whiskey’s flavor derives from aging. Depending on the cask, the tannins, lactones, sugars & other properties of wood interact with the bio-chemicals of the encased fluid. Very accessible, nothing too esoteric here.

Granted the book bogs down some during the last third into a compilation listing bars with their respective mate & some tasting notes. This might flow better as a grid table. It might also benefit from the now-emerging science behind culinary pairing charts, datasets that map flavor combinations based on bio-chemical valences. Still, the guidelines herein should embolden the timid & inspire the daring to try these recommendations &/or play with their own.

The crescendo at the finale comes by way of a Whiskey Truffle recipe. These bonbons pop with such force the author felt compelled to list contact info for Alcoholics Anonymous in the resources section. Now that’s the kind of minister who hails from north of heaven… from evermore on high. Oh, this ever clever Rev. R.M. Peluso. So diabolical to be saintly.

Easy to spot this worldly spirit rolling up to some kind of masculine books ‘n bourbon bar, pulling out her splitter & lighting into a fat blunt cigar. All part & parcel of her mission to divine pleasures in this realm of the senses, on this mortal coil, before w’all shuffle off for eternity. This shouldn’t surprise anyone. In medieval Europe monks became some of the best brewers and nuns baked the best breads & confections.

That very connection links directly to this being so much about conscious living. The good Rev practices mindfulness even when munching potato chips so not to overindulge. Again, a nod toward the meditative aspects. For these 2 sumptuous goods that entails, of course, the melt & the vapor. Deep Tasting to the vanishing point… of self into a cosmic giggle. Flow, baby, flow… Followed by time dilation; then time winks out — in The Zone. One with the wavelengths, with the chocolate, with the whiskey. You become the thing(s), no separation. Extended out to infiinty &, ultimately, oneness. Absolute being. Altered state. Tapping into & downloading the universe. Uni mystico. Who doesn’t want that?

This very site started by convening monthly roundtables on Sunday nights at the The Brandy Library in NYC’s Tribeca district. There, creatives from the arts, culinary alphas, the occasional Wall St. financier & people like Rev. Peluso would sip, smoke, & satiate in a communal ‘break ‘n bite’ over chocolate & conversation. As the C-spot™ transitions away from those beginnings toward an end in sight, beyond coming full-circle, the good Reverend elevates the art of fine living for everyone. In the process Peluso enshrines the pair in the kitchen cabinet & canon.

A muscular addition to the literature.

May the Great Spirit bless her.