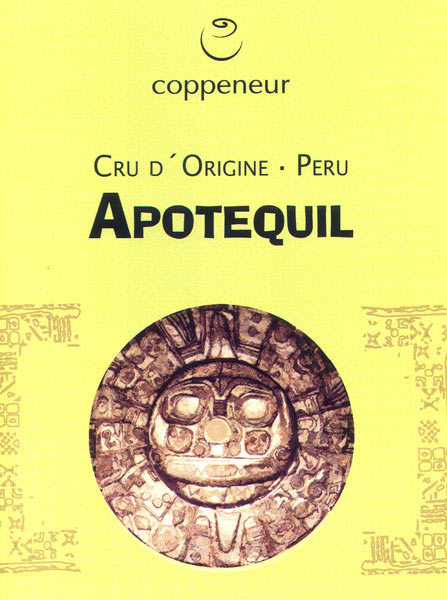 Impact
Stirs along the lines of Viracocha f/k/a Kon-Tiki (rather than the god of lightning Apotequil) & the legend who founded Inca civilization carrying a golden staff called tapac-yauri while the Mamaconas - young women of exceptional beauty &/or nobility - attend to Inti the Sun-God in his temple like vestal virgins.

Aroma   8.1 / 10
from a distance toffee-coffee caramel -> sisel rope, butter-supple leather, olive, mushroom, & coconut shell on the close up
Mouthfeel   13.7 / 15
Flavor   45.3 / 50
papaya-tangerine drenches the senses -> back tone polyphenal escorts golden soursop -> cherimoya against licorice & light black pepper in concert w/ small black olive -> peaks on a crowning chocolate hit -> balsa to sweetly balsamic -> breathless cocoa blossom sunset & a burst of indelible spices (nutmeg, cinnamon + ginger)
Quality   18.2 / 20
By appearances - round shape, smooth alabaster skin - a Porcelana but a clonal transplant, not the historical variety. Otherwise exacting in every aspect, down to the very ratio (CBS [Cocoa-Butter-Sugar] ~2:1:2). Can only be compared to itself... the feminine 10 degrees of seperation with its 72% male twin, the 2 forming an acute angle of perception. Coppeneur showing the way by demonstrating the precise distance in the difference sugar makes, seemingly altering both the roast & the conche in the process. This bar might have you ask ‘where’s the meat?’ bulging throughout the 72. In so making cocoa mass (distinct from the marketing hype of cacáo-content) the primary component, Coppeneur ensures adequate support & depth, guaranteeing true cacáo-content ala Bernachon. Subtle-muscle here flexing all those stunning fruit hedonics then becomes the answer, contracting together to lift a buxom spice chest heaving at the final sigh.