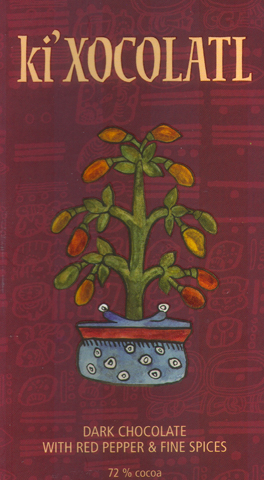 Impact
The holy trinity of the Mexìcâ: cacáo, vanilla, & pepper. Add some Euro-style sugar too for a modern adaptation of the Mayan quincunx symbolizing the 4 cardinal points... then put yourself at the center for the vertical dimension & this acquires the power of a personal pyramid of which every brick you’ll need since the chocolate in this bar more than once dangles from the hangman’s branch of the chili pepper plant.

Fear not, however; as Warhol proved, death can make you can look like a star.
Appearance   3.9 / 5

And sumthin’s not adding up on the percentages either: the listed CBS (Cocoa-Butter-Sugar ratio) equals 4:7:9 falling well short of the 72% advertised.

Leaving that aside, the cacáo in this bar possesses startling staying power, a stamina unforseen in its base -- both in an ability to withstand the spiced onslaught as well as a remarkable 2nd wind / resurrection. Obviously Nibs help & may account for the discrepancy in the cacáo-content but nonetheless improbable for a Criollo, provoking a reconsideration of long-held beliefs.