Impact
For better or worse, Fiji historically dined-out on cannibalism during a period referred to locally as na gauna ni tevoro (time of the devil).

The ferocity of this lifestyle deterred European sailors from going anywhere near its waters lest they get boiled into a band of skulls, giving it the name ‘Cannibal Isles’ (well, it was one way, however temporarily, to keep the colonists at bay).

Recently the islands have been rocked by a lot of coup d’états... all at odds with the locals’ current reputation as amongst the friendliest & most relaxed people in the world.

This Cundeamor cacáo (named after a vine-like plant for its bottleneck shape belonging to Cucurbitaceae, related to the Chinese bitter melon) lures with the floral corals of a mermaid, then devours with the force of a man-eater, before assuming its final tranquility.

Navigate at your own risk. 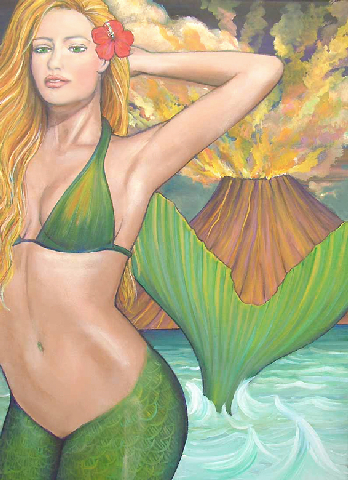 Amore among the Cundeamor: hmmm, if ya wanna taste, come in a little closer (by Laura Mercer)
Appearance   4.7 / 5

Sweet if highly subliminal harmonics in the opening frames prove enduring enough to offer a respite & some melioration from an embittered mid-palate when they rebound at the very end in a progression that conforms to Mandelbrot’s calculus that chaos is not completely chaotic.

A longer ferment (these undergoing just a few days) could’ve evened up the profile, allowing the pulp to soften the phenols via greater acidic conversion. Though mercurial, this bean displays solid backbone & grace. It also projects what Adi’s other varietal - the Amazon – mysteriously misses: high CQ (Chocolate Quotient or baseline cocoa flavor free of any nuances).

Together they should provide the germinal seeds for a ripe estate-blend.