Impact
Takes the Jimmy Carter of cacáo (Amelonado... a commoner but fraught) & nearly elevates it to a Crazy Horse (or his Oglala Lakota name Tȟašúŋke Witkó) in the shadow of Mount Rushmore (Black Hills, South Dakota). 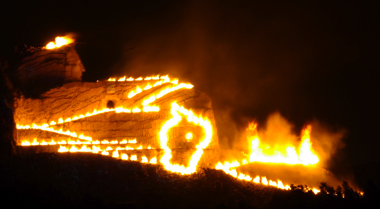 Simple, perhaps too simple, as maybe the ferment -- still lingering on the husk -- could've gone longer to penetrate the seeds more to impart vital flavor pre-cursors.

Hard to argue with the results though: scant bittering (except for the dying end) & what a constancy of flavor once it hits mid-palate.

The degree to which Monda roasts really measures & nuances this Amelonado genotype & nicely squares its compounds. Precious few are prominent in number, & those mainly residing at the lower strata of the spectrum, but well defined & articulated.

And done in situ no less; a demo of just how serious Monda is in taking cacáo to the next level by keeping its processing close to home (in this case Nicaragua). The kind of bean that screams "CHOCOLATE" in the tradition of the Xoco-sourced Indio Rojo.