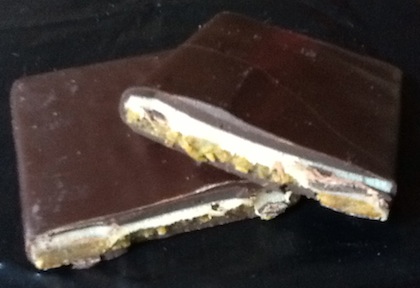 Aroma   7.8 / 10
a loaded complex / every angle set at a different scent... vaporized fruit cake streaming from a brandy still -> tobacco, leather 'n wood, the hallmarks of W African cocoa -> Bitto cheese stink -> beef jerky & epoxy (huh?)... the consequence of over a dozen ingredients
Mouthfeel   11.7 / 15
Flavor   46.1 / 50
sugar-injected booze (cherry brandy leaking all over) -> heavy glucose -> marzipan sops it up some with the sweet meats of pistachio at the edges -> ventures into a cake dimension as the elements start to fuse & a layer of cream that does the the fondant-dango for the icing (thank you, Freddie Mercury & Queen) -> chocolate interlined with beautiful vanilla-wattle -> berry tart (think chocolate Linzer) -> everlasting brandy
Quality   17.3 / 20
First half just a segregated mess / mash wherein 2 + 2 ≠ 4 -- it equals a lot less than that. Then the elements mesh & meld & this composition multiplies... exponentially.

So many sugars, spices, nuts & seeds in a teutonic recipe ultimately rise up in slingshot-alignment when the sheer numbers of them could've just as easily fallen out & disintegrated into a catastrophe.

Most will react to the obvious alcohol but the highlight, among several, goes to wattleseed -- indigenous to Australia -- with its own inherent chocolate, coffee, hazelnut & vanilla tones that subtly compliments the combo even at less than 1% of the total weight.