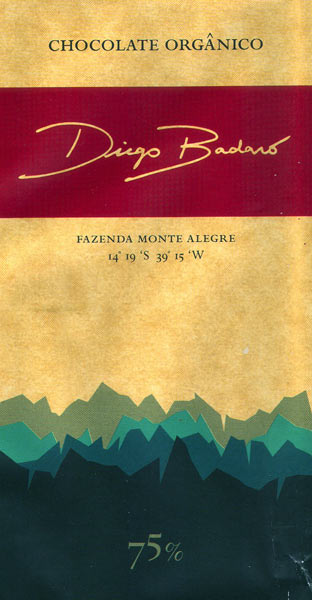 Impact
Get used to this name. The Badarós are a fabled family, written about in Jorge Amado’s historical novel The Violent Land, chronicling a jungle-version Real McCoys during the early 20th century. Instead of the Hatfields, the Badarós deal with their rivals, the Oliveira clan, resolving land disputes thru tocaia (an assassination code somewhat unique to the rainforest), all with a Romeo & Juliet twist in the subplot (eventual intermarriage). Fast forward to today, the heir to the estate, Diego, apparently has a lot of game - settling scores by passing this joint around as calm as a peace pipe. He’s out to improve the reputation - his & Brazil’s – that they’re more than just the home of low-grade ‘Forastero’.
Appearance   4.1 / 5

Aroma   8.6 / 10
super refresh, light & airy, even as butter holds much of the fragrance; caja umbu & white pitanga flowers (Brazilian cherry) along w/ juicy plum & melons; among the lightest Amazons ever – low to no wood, coffee or nut
Mouthfeel   14.2 / 15
Flavor   43.8 / 50
opens fast on strong cherry immediately followed by chocolate bang... this bar means business -> increasing acidity from cherry of the tart pitanga variety -> minor bitter underside (wooden in nature), supports acids thru the length, which soon blacken to prune, fig, & molasses -> wine must -> lime lightens the load, brightening the ever chocolate presence -> clears out a tropical, sub-acid sweep of feral fruits w/ meaty essence, dramatic as the difference between GMO & heirloom tomatoes
Quality   18.2 / 20
Estate-grade. Pralus in disguise: he’s the one processing the beans into a bar at his benchmark 75% cacáo clip (guess according to him 70% comes up shorter than the much touted “ideal” ratio), with a roast quite mild by his standards – over a low but steady fire. The result: more fruit & oxygen, beautifully controlled acidity, & nice bitterness adding depth, for fully dimensional bar.