Impact
Used to be any barsmith batching out an unsweetened 100% cacáo-content chocolate received the clinical diagnosis of verruckt (German for ‘crazy’).

Forget Heisenberg’s uncertainty principle. 100s failed miserably & consistently, an entangled brute fit to erase  from the memory bank except no one could untaste them to forget.

At a roundtable of chocolate insider's (makers / ferment specialists / breeders / geneticists / etc.), an anonymous unsweetened was passed around amidst the chatter. One, an esteemed agronomist who knows the field, remarked how it has the same effect on the taste buds as a crop duster. Everyone laughed. K. Then again, they were all half or wholly drunk. Either way, hmmm, a crop duster.

Ya see, the stuff rankled so much bitterness that guys like Prof. Adrian Cheok probably engineered his Taste Buddy device to offset the harshdown. His invention emits low-level electrical currents to stimulate taste buds into perceiving sweetness even when it’s not really there. In other words, a gadget that makes broccoli taste more like… errrr, well, chocolate.

Zotter in these double-100s circumvents the need for any hi-tech gear, be they electrical currents or crop dusters. Just some time-honored traditional methods to smooth out the jags (in the main…) while maintaining some bite to remind that cacáo is, afterall, potent. 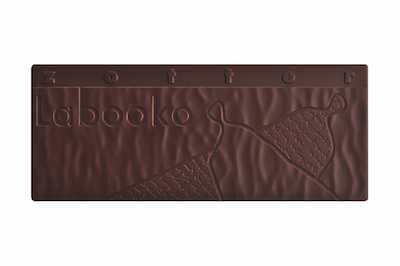 BAR
slightly lighter color
almost self-same, a bit more subdued & controlled by perceptible darker roast (whether in fact or not)
walnut midsection followed on by savory apparitions & elements, grounded in salted 'rooms quite the vertical progression... from airy to deep Earthen
cocoa
walnut
mushroom
topsoil
minerals
salted 'srooms
Quality   16.1 / 20
Zotter's processing between the two of these plays to the drinking & eating. The former stands up big / bolder compounds because its end state shall be diluted in water while the latter goes direct, straight to the tongue which thus calls for greater refinement.

And make no mistake: the drinking tab bites down some.

But as more & greater 100s keep coming off production lines, expect that ubiquitous spice-additive which even 2-ingredient "purists" rely on for a crutch (i.e., sugar) to go the way of human labor once robots fully show-up for work. This might force the high commissions of the cocoa doodle gurus to redefine chocolate because, as pointed out on this site years ago, nothing spells c-h-o-c-o-l-a-t-e more. And just one more definition of the C in the C-spot® (hint: the Roman Numeral for 100).