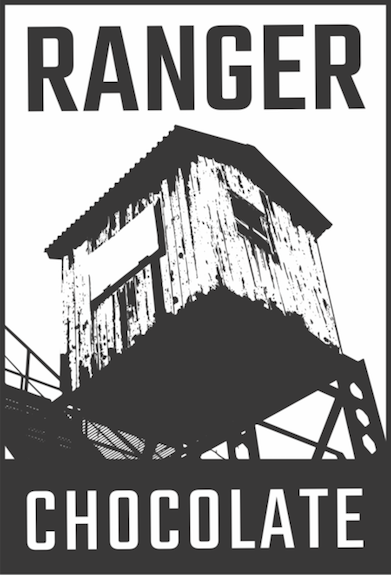 Impact
By now every pod-head in chocolate knows the safe word in the IFC hit Portlandia. Hint: the tree from which all chocolate derives.

One sensitive character said it even when her boyfriend slept. Ouch. Such macro-passive-aggression. Must be related to patriarchal privilege.

This company -- Ranger -- operates in Artisan Quarter, a central east side industrial district across the Willamette River in downtown Portland, OR. That growing chocolate epicenter which includes several other micro-batchers (Woodblock the most established among them). Here, 4 Rangers (2 couples who've been friends since 2004), own it equally. They still hold day jobs. This then their passion gig. Truly polyamorous.

No A-hole celeb chefs or culinary habitués. Goodwilled workers with backgrounds in tech, ops, graphics, & the Great American art form -- marketing. The group takes its name & icon from the Forest Ranger lookout tower. The symbolism shouldn't be lost on anyone. Rangers are good stewards of the land. Likewise these rangers are good stewards of cacáo, mindful of the farming practices & the people responsible for growing & cultivating it.

Their luv-in also runs a café/ retail store called Cup & Bar where the fare is made all in-house. Keep this up & there'll be wildfires even Smokey the Bear won't dare to prevent.

Early production focuses on sourcing from Peru in order to forge relationships one country at a time. Next on the range: Haiti.