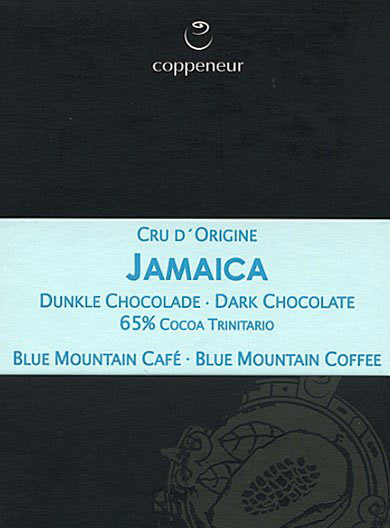 Impact
Potent all-out assault from a common enough combo but here more vital, alive, & superior. German engineering technology at its highest: hybridizes coffee & cacáo trees into a sequoia that's too big to fit in the forest & pounds every sense - including the 6th one. Just kills it. A monster.
Appearance   4.9 / 5

Aroma   8.4 / 10
aromatically accelerated... full-city Viennese bonfire of a roasted-riot: smoked coffee w/ nose-bleeding punch to it (+ its own native almond / vanilla notes) & aged barrel wood lifted by sparking sugar crystals
Mouthfeel   13.2 / 15
Flavor   47.8 / 50
strikes right between the eyes & hits a nerve - razor-sharp coffee pervasion just obliterates the envelope -> sugar close behind -> almond meal -> all the delicate fruit in Coppeneur's plain Jamaica 72% concentrate & pool into dasheen yam -> vanilla (though none added) -> wood tones (cedar / oak) -> fresh vegetal coffee berry shadowed in cocoa -> creamer -> acrid café scratches its finger all the way down the throat along w/ juniper & enough caffeine to reach the aorta & get the heart racing while the entire procession commingles into a bangarang knocking the eye balls out, searching for them rolling around on the floor where descriptors dead-end: when words fail, have reverence... let go with the flow... silence is the answer
Quality   19.1 / 20
The formula sounds unwise on the face of it. Coppeneur's Jamaican origin beans, peachy soft & light even in their 72% plain bar format, reduced to a mere 65% here, strafed by ripping Blue Mt Coffee (also from the same island; revered in the caffeine-world right up there with Hawaiian Kona & Ethiopia's Yirga Ch'efe; imparting a whole other level of quality compared to the myriad of chocolate-coffee bars on the market). At 1st blush, this experiment smells of some name-dropping, high-profile crime-scene custom-made for the evening news... & the police blotter reads: "we were just peaches waiting to be bruised." What starts out extremely imbalanced, rights itself as this cacáo proves more durable than suspected - its influence felt beyond the flavor - despite a bright-breaking coffee. Coppeneur delivers the blend with power (which almost anyone with a home brewer can do) &, more importantly, ultra finesse. Well worth the price of admission. Jump on this.