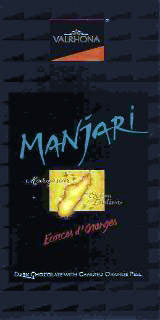 Impact
Clumsy complex that, once past orange spray blast, fuses up nicely some surprise & contrast for the Tiffany class.
Appearance   4.7 / 5

Aroma   7.8 / 10
among Val’s boldest upfront roasts, to really test orange zest w/ contrast; where one might expect Palmira (a natural w/ its inherent orange profile) we get a Caraibe & maybe some Gran Couva: coffee, wood, nut, blackcurrant, & orange only in a blossom
Mouthfeel   11.3 / 15
Flavor   38.1 / 50
chocolate has a play date w/ blackcurrant & just as fast both get mugged by orange zest; brief equilibrium sets in, then candy just peels the guts out of cocoa w/ an orange blast -> orangade -> orange juice, leaving neroli -> chocolate re-assembles itself into a mocha guise & surprise pepper at the very back end
Quality   15.7 / 20
An A-B-A alternating current with the middle (orange) section dominant & far too lengthy, leaving you in citric sputum.