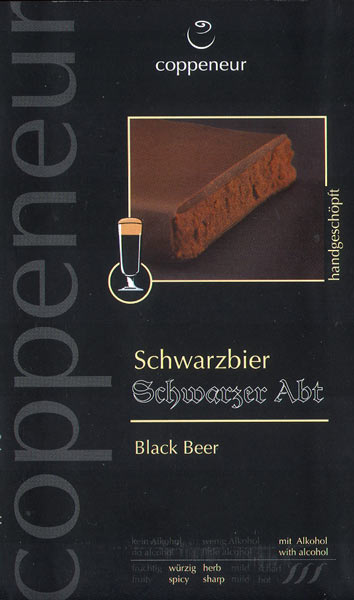 Impact
A whole powder keg of ingredients, the blueprints seemingly incongruous on paper - but that'd never stop Coppeneur, & its accomplice here... the perfidious Monastery Brewery - as they watch this explode into fairly laser-straight flavor that Goethe would raise a stein to (errr, a bar) with one of his incisive cheers: "What you can do, or dream you can do, begin it; boldness has genius, power & magic in it".
Appearance   4.1 / 5

Aroma   9.4 / 10
lays the lumber w/ a 2x4 to knock the nose out of joint: big brandied oak timber, tangy cocoa woods (oncidium sharry), barley, & hops; rare
Mouthfeel   12.8 / 15
Flavor   44.6 / 50
hops out a dry cocoa draft -> strong pale cream sherry ale -> maraschino cherry -> breaks down a little randomized in the mid-pal around malted cereal grains -> corrects itself by snapping into re-alignment w/ German Black Forest cake -> taps-out black beer, w/ its own resident chocolate tones, rocking the back
Quality   18.4 / 20
High integration / slightly over-engineered. Coppeneur elects to employ bulk Callebaut instead of wasting its own in-house couverture & it shows particularly in how this teeters on the edge at the midway point before beer pulls it thru.

"Schwarzer Abt" (Black Abbot Beer) is the darkly malted & roasted variety of original medieval craft before lighter-colored/shorter roasted brew came on the scene. Meshes seamlessly due to its own inherent cocoa & coffee notes (embellished to be sure by the added dairy, both butter & milk, which further narrows & bridges any divide).

The result: a dressed-up Dark Chocolate that, despite an unequal pairing, could be mistaken for some exotic single origin bar.