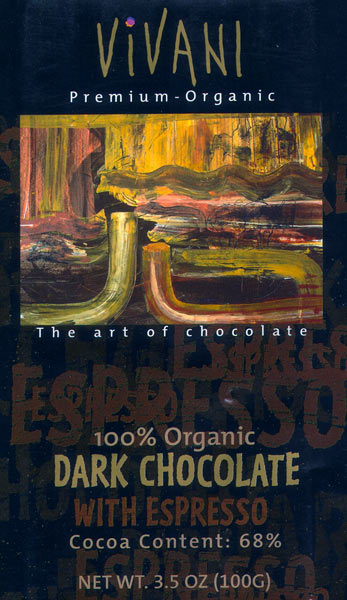 Impact
A kick-boxer delivering a walloping head blow that rocks the face off, starting with a frontal shot that hits right between the eyes & crushes the nose... sending taste buds reeling & discombobulated before staggering back up.
Appearance   4.3 / 5

Aroma   6.9 / 10
stymied: Vivani bars already come equipped w/ resident coffee features onboard; the add'n here not so much amplifies but, similar to its color, extra sugar neutralizes it into cereal grains (alongside heavy roast producing burnt coffee grounds + charred toast) -> undeniable licorice / black spices underneath; aerates to a tiny compost pile of dooky humanure
Mouthfeel   13.6 / 15
Flavor   42.8 / 50
pulls a shot of concentrated - though some might say over-brewed - coffee that scorches the lips on the way in -> bites the tongue w/ a force harder than a snapping turtle -> choc butter the soother to a good espresso burn mainlining a Young Turk... & like quitting smoking, everything regains its flavor; taste buds paved beneath decades of tar spring back to life & an entire sense restored -> soft reds dissolve into sugar, flailing their limbs in the pressure cooker (quite nice actually, if sadistic) -> nut butter -> molasses -> melts down mocha mud mountain w/ sweet backing... after-booms in the distance
Quality   17.5 / 20
Stern German with a merciful sweet side. What it lacks in the clarity of Santander's Espresso or the killer-app of its Duetsch compatriot - Coppeneur's all-world Jamaican Blue Mt, it compensates for to the core. Delivers instead a long & strong power puck with caffeine ripping down Broadway... rough & a little jagged at the edges (& there are a lot of edges here + flavors of entanglement - Alanis Morissette style) but sweetly self-corrects thru a series of transitions that deftly mask underlying harshness & bitterness (possibly from oxidation before encapsulating the espresso). The combine works due to chocolate finding itself between a sugar rock & a hard espresso too big for the bar, the 2 just grinding against it into confected erosion that gets better as the individual elements lessen their loads & wear away into the mix - almost what's referred to as a Cubano in the coffee world. And make no mistake, coffee powers thru well after the end is over.