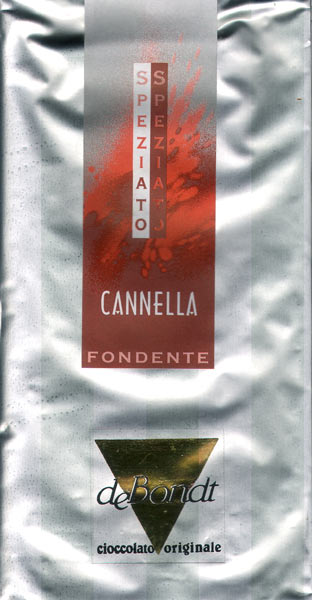 Impact
Matador deBondt waves the cinnamon cape for chocolate bull to charge thru. But sometimes when you mess with the bull, you get the horns unless you're former Yale neuroscientist José Delgado recreating his Cordoba experiment by hooking its brain up with stereotaxic needles attached to a remote control radio transmitter so when it charges right at you, just press the button to stop it dead in its tracks.
Appearance   3.2 / 5

Aroma   7.8 / 10
straight & simple: nut (peanut / almond), spice (cinnamon / black pepper), & cocoa
Mouthfeel   10.4 / 15
Flavor   42.9 / 50
chocolate & musk -> red raspberry crossed by the likes of a Salawesi Toraja coffee (soft wood, wild butter caramel - absolutely excellent) -> cinnamon BGP (background prop), so light it might be white cinnamon... coaxing the intrinsics out of the chocolate, warming it into light mocha -> the feel, more than the flavor, of essential oil of cinnamon -> brown sugar goodness -> dense fudge-pack, viscous syrup
Quality   15.7 / 20
An instance of the ancillaries (especially texture) pulling a bar down. But also, xtreme overbearing control; spices (vanilla + cinnamon) finely expressed to draw out & bring up the inner chocolate notes. As such, it’s good but lacks the total package like an athletic with all the right technique & too little game.