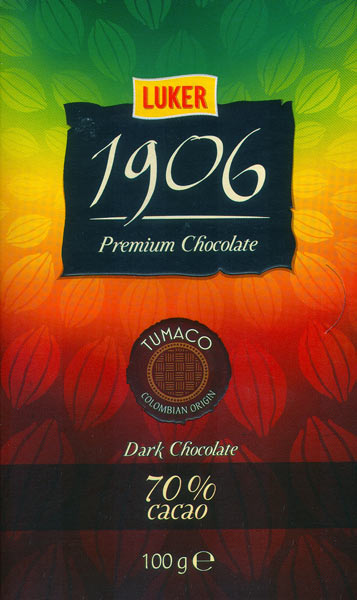 Impact
Rages out of control & takes a visceral avenue down to aggravated murder on death row. The inmate who did the crime & serves the time claims he’s really a marshmallow... a combative motherfucker of a marshmallow to be sure... but still just a marshmallow.
Appearance   3.9 / 5

Aroma   6.9 / 10
imitative in an exaggerated way of its big brother 85 like a li’l pip squeak who wants to show him & starts lifting weights too early, taking steroids too soon: scary wooden VOG (Vanilla Oak Giant morphed into a roblé tree here) overshadows choc-chip cookie FXs sweetened by dried lucuma/maple sugar -> marshmallow cloud
Mouthfeel   13.8 / 15
Flavor   34.4 / 50
marshmallow rolled in cookie dough then battered by a charred & splintered roblé 2x4 -> fast-fleeing papaya the faint fruit of this beating -> bittersweet vanilla almond -> carbon dating back to 1906 -> creosote -> burnt shadows at the back
Quality   19.6 / 20
All the inherent promises of Colombian cacáo in general & this bean stock in particular are there, gagged & bound up in the hatchet job... er, ‘processing’ (way over-toasted / heated leading to severe imbalance), even more dissolute - remarkably - than what was done to its 85% sibling (despite twice as much sugar... due to added & probably Dutched cocoa powder), yet still screaming from the future that, once surviving this, things will be so much better.