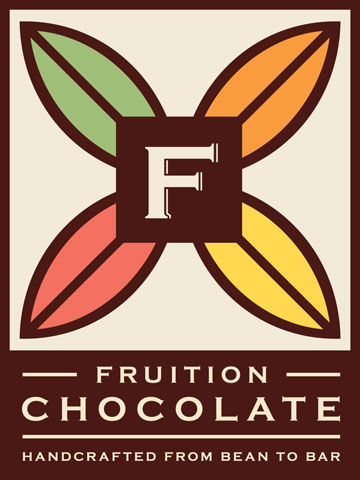 The first term among its hallowed entries: Fruition.

A platinum word if there ever was one to join others like: bliss - symphonic - courage - confabulation - euphoria - delirium - climax - chaos- revolution - lustful - thunder - sensuous - compassion - love &, of course, chocolate itself.

Chocolate... the treat of all sweets, derived from the fruit-bearing tree Theobroma cacáo (aka, to add one more to the list of sacred script, "nectar of the gods").

Fruition just sounds & rounds well before rolling off the tongue -- frü' i-shən. Sonically significant too... whether in the lingua franca -- English -- or globish or any language. On top of that it looks vital in its Roman alphabet letters.

It embodies the hopes & dreams of both Graham's small craft chocolate & humanity's greatest aspirations. For its meaning is all about the evolution of a seed into its fullest expression... its succulent sweet-spot... a process all living creatures undergo if they are to realize their potential.

How much more fruitful can it get?
Presentation   4.1 / 5
mostly Oriol-like pod molds
Aromas   3.9 / 5
fairly recessed
Textures/Melt   7.8 / 10
Flavor   43.6 / 50
(NOTE: this review reflects a small sample size)
creative-bordering-inventive without being eccentric
clear & clean articulation of flavorings yet in a pretty serene equilibrium
Quality   25.7 / 30
A startup with pedigree & chops to start... from an exec pastry chef, ex Bear Café near Woodstock, NY.

Most pastry chefs amount to no more than butter 'n flour kings with a ego for a crown. They traffic in recipes & re-melt someone else's chocolate before affixing their name on the box.

Fruition reps the new breed of bean-to-box (& the bombones within) which, come to think of it, trumps mere barsmiths. By taking the art one step beyond in the transformation of cacáo into chocolate at its, arguably, fullest expression, it elaborates the chemistry of manifold ingredients in a multi-dimensional way. So while most barsmiths play checkers, Bryan Graham sets out to master chess.

A boxed assortment currently in development; the guy's just a little more than soul-coughing at the moment spitting out these considerable bon bons. Wait 'til he gets his seed selection, production, plus technique down pat & really hits his stroke.

One to watch.
Selections
Brown Butter Bourbon Caramels -- visual dazzler in an update of Fruition's earlier Bourbon Caramel (see below); young whiskey laden with its own inherent sweet caramel tones presents the first & last blast in this uniquity of tremendously even staying-power since the grain gets multiplied with glucose + caramelized cream amplifying its FXs... to excess, in a kind of warm steaming mead, except for the brown butter which counters with an inadequate offset; vanilla bean then lowers the complementary principle to overkill, so by the finish it all cloys into the enamel; suggestion -- skip the corn syrup & just distill it; 'A' nevertheless for Ambitious

Marcona Almond -- enrobed in Dark choc + dusted cocoa... another elaboration, this one tossed with olive oil, honey & rosemary; all the elements transparent (particularly the herb) even in their confluence which meet at a median bandwidth of texture (marcona rarely the crunchiest of almonds, let alone nuts, set to a smooth toothsome chocolate); a disappearing act of culinary magic -- consumers will make these happily vanish fast

Pumpkin Pie - crystal sugar interplay with a cream fondant center high on the spice factors, especially nutmeg, to over-run the rest of the elements which only catch up at the meltaway point... where one question lingers: where's the pumpkin?

Bourbon Caramel - oozes dark caramel & booze in deft alignment with one another as the Maker's Mark™ brings its own butter & vanilla compliments to the party to mix well with those of the rather liquid sugared-confection; superb

Honey Marzipan - marzipan, a love-it-or-hate-it proposition in the truffle universe, fully embraced here as Fruition gives a rather coarse chop for more meat rather than meal flavor, while honey adds the sweet to bitter-almond; everyone should escape the hate to this nut 'n honey

Raspberry - none of the typical brassy Smucker's™ onslaught that 93% of the chocolatiers assault customers with but instead a slow-building crescendo of berry thru a Dark robe with phenomenal poise & vertical movement; contender for an int'l award