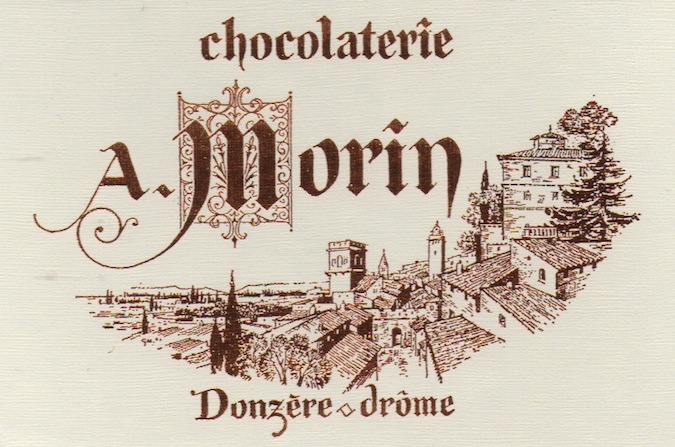 Impact
A. Morin along with a pop diva joins the C-spot® for a formalized tasting during high-tea at the Crosby Street Hotel in Manhattan. Just the packaging, the mere mention of its provenance from "the south of France" (note: too many starlets stay confined to their boutique hotels when traveling without getting on the backroads & into the countryside) &, moreover, its treasured contents elicits moans, groans & sighs of "oo la la".

In other words, chocolate blew the lids off the pots, the fingerlings off their plates, & various jams out of the ramekins. Its only competitor -- double clotted cream. Luckily the kitchen ran out, downshifting to simple clotted cream which requires only single bypass surgery to unclog. 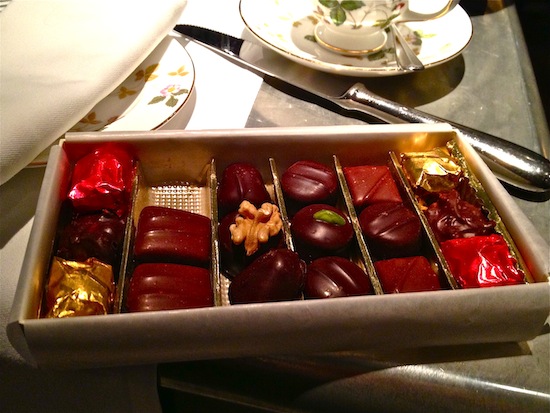 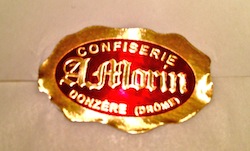 Aromas   3.9 / 5
a nut-spread with slight fruit jam support
Textures/Melt   7 / 10
Flavor   44.1 / 50
quite présent (as opposed to vácant)
fresh express
leans sweet... a lenient even liberal hand on the sugar
Quality   25.8 / 30
Promises met in the presentation kept & delivered in the Flavor dept.
Emphasis on spare ingredients & pared formulations; nearly pitch-perfect & precise save for the sugar quotient. And yet considerable complexity too, achieved by properly matching the elements.
Selections 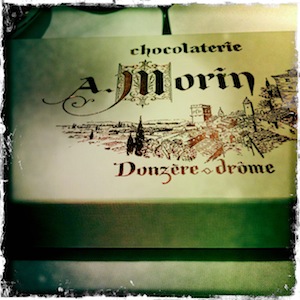 Palet d'Or -- announced by just a feathered gold leaf on the otherwise tabula rasa slate top & a waffle pattern on the base from the enrobing belt; unusual for the type, both for its firm though smooth texture (as opposed to the standard silken cream ganache) as well as its Dark fondant encases a nut praline with sweet light-honey syrup; quite the departure... less an innovation than a re-appelation

Grappa - icy feel to this contrarian wet-cherry under a Dark robe shot with lightning sharp liquor in which, opposite of the Nougat (above), sugar comes in to relieve; fortified nonetheless all across the firing line

Walnut-Coffee Marzipan -- as one journalist-turned-stylist at the Hotel chocolate flight intones "it snaps perfectly over a soft belly of marzipan blended with coffee. The quality of the walnut sitting on top of the piece is both fresh & flavorful, impressive considering that walnuts go rancid quickly because of their high fat content. Back on the inside -- the rather savory interior compliments the sweetness of the chocolate couverture. Flavors segregate somewhat until the melt thru when... well, I close my eyes & meditate on the gestalt but cannot decipher it altogether... what once looked like a nut doesn't taste like one anymore"; ahhhh, cacáo invites flowery mysteries

Petit Rocher - sweet nut-meats (half 'n half -- ganache & crunch), perhaps too sweet as sugars (including possible HFCS) override the proceedings & leave chocolate flattened in its wake

Pistache - another marzipan, incredibly soft Texture -- moist & mealy -- opposite the sweet nut bolstered by an anise accent which ground almonds can inhere

Gianguia -- wholesome hazelnut paste, if on the sweet tip, but sugar held in check by a blast of tannic Dark Chocolate thunder

Red Truffle -- somewhat unusual for the category in that this red foil-wrapped Dark truffle contains a gianduia center; the bite rides in sweet, too sweet, until hazelnuts &, moreover, Dark couverture rolled in cocoa dust become the controlling factors while sugar recedes in their wake for an ultimately well-paired & sequenced piece