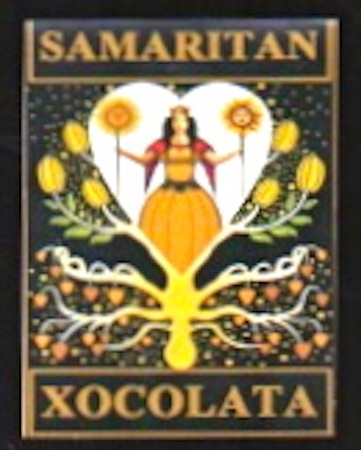 Impact
The good Samaritans of Costa Rica trying to revive the "true religion" of Xocolate (disregarding the amalgamation in spelling) -- viz., a quasi-throwback to pre-Columbian / light if-not-quite coarse-ground / old-school traditions -- in reaction to the modern-day Kohanim & Levites (various gatekeepers from govts, NGOs, gene banks, & candy giants bent on sanitizing chocolate with steam, vanilla, loads of sugar + other technical means & socio-environmental proxies to practically shield the consuming public from a taste of the nasty end of the business).

Samaritan Xocolate avoids none of that as it offers a real sense of grit & dirt & honest hard work in this delivery of both bars & bombones.
Presentation   4.3 / 5
rustic with imaginative touches such as the folding tobacco pouches for the bars
Aromas   3.4 / 5
blunt
Textures/Melt   4.9 / 10
Flavor   31.6 / 50
none shy; head on
Quality   17.1 / 30
Definitional locavore in the Southern Zone of Costa Rica: humble-cultivars / home-ground / hand-crafted
Selections
Cacique Estate -- peeled seeds redolent with greens, nuts &, naturally, banana (a mainstay of Nibs generally); mostly flats, ovular & medium-small sized; the Aromatics transfer over directly & nicely to the Flavor with nuts leading the way & tremendously kind savories at the mid palate before soiling down & digging into some good bitter Earth; easy & accessible, thus excellent for snacking (making, perhaps, for a limited finished chocolate because of it); anyone who knows anything about Meosamerica lore understands the significance of Cacique (well, other than academics, few insiders even in the chocolate industry know stuff other than yield & productivity) & these seeds live up to the name: the 1st Mayan title known to the Spanish while Columbusing the New World, translated as ‘Lord of the Route’

Trocitos de Cacao -- Nibs project a peanut inflection in a coarsely-ground 70 or so percent chocolate base of basic cocoa traits enlivened by added vanilla, cinnamon, chili & salt to cover inherent deficiencies &, for the most part, pull it off even as there's no denying that a superior grade cacáo would alter the dynamic in favor of greater gastronomy

90% -- cupcake quality cocoa notes, very narrow & direct... never veers off track save for a sidebar bitter which, other than that, remains relatively mild-mannered for the percentage

Sencillo 70% -- the name says it all (Spanish for "simple"); very vanilla-oriented with backing from cinnamon (both added as this copies Trocitos de Cacao but without the Nibs) which all combine to form a bubble-gum sweet-spot; some fun yum (excluding the caustic aftermath)

Mumbai Chai -- another bar infusion; chai & the rest of S. Xocolate's spice pack racks up a flavor that goes bananas on the tongue (literally & figuratively) as though someone unpeeled a ripe Chiquita® & stuck it in

Salted Caramel --all there, especially the salt, doubly the salt, no, triple or quadruple the salt; enough to form kidney stones

Mint -- so strong it arrives in a separate zip lock + double wrapped paper; pretty much an all-mint affair… chocolate merely a vehicle for its butter to balm the herb